Athletes of the Meet. 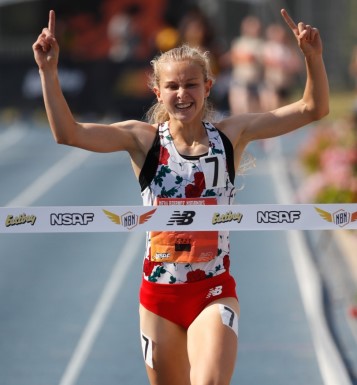 Tuohy, a North Rockland, NY sophomore, came into the meet as the defending champ in the mile, and ignited Sunday’s final session with an electrifying 4:33.87 over 4-plus laps of the Irwin Belk Track – taking down the national outdoor record for the event set way back in 1982 by Polly Plumer (as well as the mark converted from 1,600m from Alexa Efraimson in 2014). Her performance was particularly impressive given the 94-degree temperatures and the fact that it was a near-solo effort; she won by nearly 16 seconds.

Earlier this year, Tuohy set national records at 3,200 meters outdoors and 5,000 meters indoors and she is now the overall indoor/outdoor U.S. 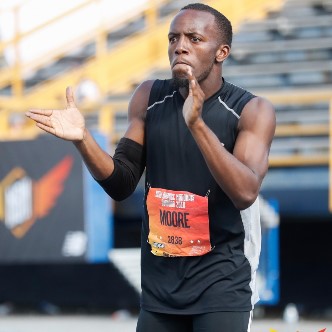 leader at 1500m, the mile, 3000m, the 2-mile(3,200) and 5,000m. This is her 7th NBN championship title overall, including last year’s outdoor mile, this year’s indoor 2-mile, and anchor legs the past three years for North Rockland’s distance medley relay and the 2016 outdoor DMR.

Meanwhile, Moore – a Hillcrest-Tuscaloosa, AL junior – came into NBNO as one of the top contenders in the 100- and 200-meter races, but hardly the favorite. On Saturday, he began by running his 100 prelim in 10.62, ranking 5th among the qualifiers to the final. But a few hours later, he executed a near perfect race to capture the title in the century with a PR 10.37 (+0.7w).

Then on Sunday, Moore approached the 200 just hoping to run well and get on the podium – and the qualifying 5th to the final with a PR 21.01. But once again, the Mississippi State signee rose the occasion with a career-best performance when it counted most. He blasted another big PR 20.78(+0.1w) to take the win.

Moore’s previous NSAF experiences included a 6.73 60m dash victory in this past 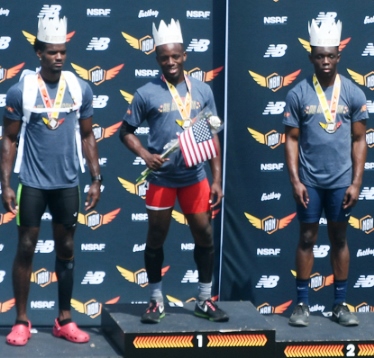 February’s Dunamis Super Meet in Atlanta. He had been 6th in the 100 and 5th in the 200 at the ’17 NBNO. At this past March’s NBNI, he struggled in the 60 – missing the final – but then bounced back in the furlong for a 3rd-place finish behind Austin Kratz and Eric Allen. In Greensboro, he was not to be denied. 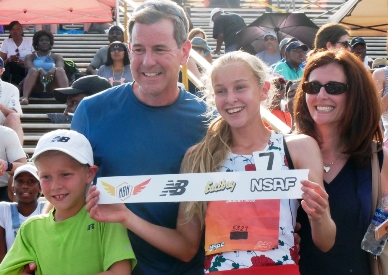