The third in a 5-part series on some of the leading contenders and first-time athletes or relays that are highlighting the entries for the 2016 New Balance Nationals Outdoor.  Look for the next two installments of the series in the days leading up to the meet and check out the previous ones --  THROWS  |  JUMPS  |  DISTANCES  |  RELAYS. 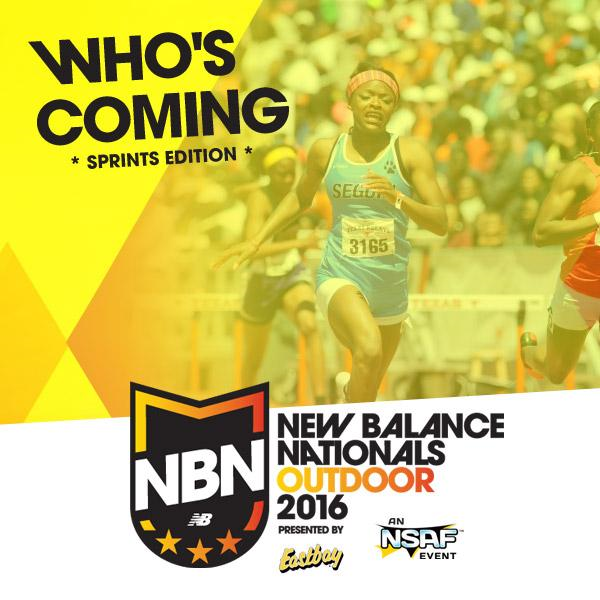 Tonea Marshall – Only if it feels right

NBNI 60m hurdles champ and national record holder Tonea Marshall isn’t all about the wins.  She’s not all about the times, either, as she’s intimated on occasion, or all about the records.  Obviously she was extremely happy when she crushed the HSR in New York this past March at 8.11 in the semis, then 8.08 in the final.  But the Arlington Seguin, TX senior’s reactions after other major wins and records, even, have been less joyous.  More than anything, it’s about how a race feels.  Marshall is talented enough and has trained hard enough that she knows if she executes, things flow as they should, and the race feels right – then the clock will read as it should and the rest of the field will be behind her, not in front of her.

That was the case less frequently for Marshall last year outdoors, particularly in her NBNO and World Youth Trials 100m hurdles races.  At NBNO, she was the runner-up behind a stunning performance by 8th-grader Tia Jones (see below).  She did run 13.12, a PR at the time, but given the tailwind and the peak form she was in, she surely felt the victory could have been hers.  The WY Trials was even more of a downer as she was 3rd behind Alexis Duncan and Brittley Humphrey.  This spring, however, Marshall has been unbeaten, with a smoking wind-legal 13.04 at the Texas Relays and a fine slate of victories to back up her indoor achievements.  And at NBNO, she’ll finally get a crack at Jones in what should be one of the meet’s more epic clashes.

First it was Jamal Walton, then Tyrese Cooper – a small, but hugely significant stream of prodigal boys’ sprint talent coming from South Florida, namely the Miami Gardens Xpress Track Club, headed up by Coach Darius “Coach D” Lawshea.  Walton started running crazy fast Youth times for 200 and 400 as an 8th-grader in 2014, but Cooper matched or exceeded most of those performances last year in that class – including a then-PR 46.44 400 for 3rd at NBNO.  He would add an age-15 national best 20.94 200 at AAU JOs (after a 20.98 at USATF JOs that just missed), along with another sub-47 in the 400.  Fans made comparisons with legends like Obea Moore and William Reed.

There was no moment on the track at NBNO last June that was more jaw-dropping than watching 8th-grader Tia Jones zip over the 100m hurdles and across the finish line ahead of older, established prep stars like Tonea Marshall, Alexis Duncan and Anna Cockrell.  Jones had been a star herself, to be sure, racking up the records and gold medals at the Youth level at the JOs.  But nothing indicated she was ready to run the wind-aided 13.08 over the 33” barriers that the fans in Greensboro witnessed.  Interestingly, nothing she did the rest of the summer in those familiar JO meets quite matched up to NBNO, either, even as she continued to win.

So the question was this – how would she do in her first full year against prep competition, as a Walton, GA freshman, in the largest classification in a good track state?  Five months in, we have an answer to that question: Pretty well, thank you.  Jones ran 8.52 for 60H in a limited early indoor slate, then a very good freshman national record 8.35 for 6th overall during the NBNI 60H prelims, against perhaps the meet’s best field, but did not continue.  Outdoors, however, she’s been unbeatable, sweeping to a 6A title over 100H, with a wind-legal best of 13.20 at state, then an eye-popping 13.03 (no wind gauge) at the GA Meet of Champs.  She hasn’t faced any of the nation’s top 10 yet, but she certainly will at NBNO, including Marshall and Chanel Brissett.

Until May 21 of this year, less than three weeks ago, you probably would have said Marcus Krah was a “very good” 110m hurdler.  He’d been something of a prodigy early on in his Hillside, NC prep career, both over the barriers and the horizontal jumps, and had a fairly steady progression – peaking with an outstanding 3rd as a senior now in the NBNI 60H in March, running 7.69 behind Grant Holloway’s national record.  Success had continued outdoors, with a unbeaten string of mid-13 to low-14 clockings over 110H.  Then came the North Carolina 4A state meet May 21 – Krah rocketed to a wind-legal 13.32 triumph and suddenly was numbered among the top 4 prep hurdlers of all-time.

That was heady stuff and, interestingly, Krah’s first loss would follow in a photo-finish at the Memorial Barrientos in Cuba – though it was a fine performance against NSAF teammate Trey Cunningham, who was just .02 behind Krah at NBNI and was sitting 2nd behind him on the national 110H list.  So the UNC-bound talent will be the co-favorite with Cunningham at NBNO.  And while he will not contest the long or triple jumps in Greensboro, he deserves a shoutout for great seasons there.  He was in the 23s and 48s as an underclassman, and improved at state to PRs of 23-7.25 and 48-8, completing a 110H/LJ/TJ triple.  Finally, in the Cuba TJ, he was 9th against the stud field with another PR 48-8.75.

There are only a couple of girls in the country who are legitimately national class in all three outdoor sprints – and one of those is CSI alum Lauryn Ghee, who impressed before, during and after our trip to Cuba last year and has only gotten better in 2016 as a Grassfield, VA junior.  She started really impressing as a freshman in ’14, when her strong performances included a 2nd in the VA 6A state 200.  As a soph indoors, Ghee won the 6A 300 and was 2nd at 55, then at NBNI, she took 3rd in a very close 400.  In a rare foray at 500m, she clocked a nation-leading 1:13.84.  All of that led to an invite to Cuba, where she acquitted herself quite well in a runner-up 400 finish and carry on the winning 4x4.

Now as an East Orange, NJ junior, Poole’s maturation has continued.  He improved his 60H time to 7.86 and was 6th at NBNI.  In the 110s, he’s been unbeaten and just won the NJ MOC title with a wind-legal PR 13.71.  With the exception of the Penn Relays, he hasn’t lost at 400H, either, with a best of 51.91 at his Essex County champs and a 52.50 MOC title, as well.  At NBNO, he’ll face Grimes – who’s coming back from injury – another sub-52 talent in Infinite Tucker, and 300H US#1 Jayson Baldridge.  With a great chance for top 3, and possibly the win, Poole can attack the meet knowing that he’s the top 400H non-senior in the country with a bright future ahead.

Sterling Lester – Hoping to finally get the win

Like the aforementioned Tia Jones, Sterling Lester was a Georgia Junior Olympic and middle-school star for many years, with numerous national titles and podium finishes, who this year has finally gotten a full season of high school competition as a 9th-grader.  The early returns have been pretty spectacular.  The Marietta, GA frosh clocked a stunning 54.11 PR in her 400 prelim at NBNI – 2nd overall – then was nearly as fast while taking 3rd in the final behind national record-setter Sydney McLaughlin.  The mark was thought to be the 2nd best ever by a freshman.

Outdoors, Lester’s patience has been tried by having McEachern, GA senior star Makenzie Dunmore in her region and contesting her in almost every major meet there.  She lowered her PR to 52.69 in her regional runner-up finish to Dunmore, giving them #1-2 in the country at the time.  After another strong set of non-winning races at the 6A state meet, Lester was invited (along with Dunmore) to the Prefontaine Classic to race the 400.  There, she finally beat her Georgia rival … while still a runner-up at 53.50, behind Sammy Watson’s 53.21.  The NBNO 400, however, will feature neither Dunmore, Watson or even McLaughlin.  Lester is the #1 seed and only sub-53 performer – a great chance for a first major win as a prep.

Like some other top rising prep stars mentioned in these previews, Maxwell Willis’s first world stage opportunity in Cali didn’t go quite as anticipated.  His junior year at Bowie, MD had been getting better and better.  After winning a 100/200/400 triple at the Maryland 4A state meet, he scored a stunning all-conditions 20.55 PR for 2nd (behind Jamaican Michael O’Hara) at Great Southwest, was a very strong 3rd in the NBNO 200, then scored something of an upset win over Josephus Lyles in the World Youth Trials 200 at 21.21 into a headwind.  Then in Cali, he had a 20.99 prelim – clearly a medal contender – but was DQ’d in the semi.  Season over.

Now in 2016 as a senior, having transferred to powerhouse Archbishop Carroll in DC, Willis’s senior year has had plenty of high points, even if it’s been imperfect.  Indoors, there were some spectacular wins, both individually and on relays – like the then-US#1 (all-tracks) 21.04 and 21.08 200s at the Kentucky and Real Deal Invites – and also some tough losses, like in the Virginia Tech 300 and in the NBNI 200, as Noah Lyles broke the national record.  Outdoors there were tough days at the Texas Relays and Taco Bell, but impressive runs at the Penn Relays and then again last weekend at Great Southwest, where his 20.71 was 2nd behind Shamon Ehiemua.  At NBNO, there will be no Ehiemua or Lyles.  Willis is seeded 2nd in the 200, but has beaten top seed Tyrese Cooper, and Carroll has a great chance to win medals (perhaps gold) in the 4x1, 4x2 and 4x4 relays.