Sydney McLaughlin and Champion Allison were named the 2016 New Balance Nationals Outdoor Girls’ and Boys’ Athletes of the Meet, respectively, after their performances last weekend in Greensboro. 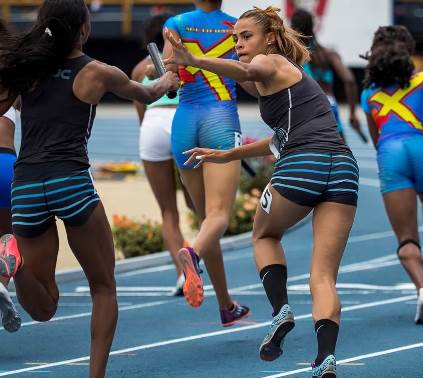 McLaughlin (Union Catholic, NJ junior) thrilled the crowd at Aggie Stadium when, immediately after the opening ceremonies, she crushed the 32-year-old national high school record in the girls’ 400m hurdles with a jaw-dropping 54.46-second clocking – and her 3rd straight NBNO title in the event.  The time she beat for the record, Leslie Maxie’s 55.20 from 1984, had also been the American and World Youth (Under 18) record – so she got those, too.  On top of that, she took down the American Junior (Under 20) record – previously Lashinda Demus’s 54.70 from 2002 – and moved to #2 on the all-time World Junior list.  Finally, the 16-year-old’s time ranks her 4th among all American women and 6th among all world women for 2016, and she is currently 5th among all U.S. Olympic Trials eligibles (including 2015 marks).

Two days earlier, McLaughlin had produced a performance nearly as electrifying.  She took the baton in 7th place in the 1,000m Swedish Medley Relay (100-200-300-400) and proceeded to take her Union Catholic, N.J. team all the way to victory on her 400 anchor.  Her 50.93 is believed to be the fastest prep girls’ 400-meter split on record (in any relay), according to noted track historian Mike Kennedy of Track and Field News, and gave her squad a 2:07.99 national record in the event. 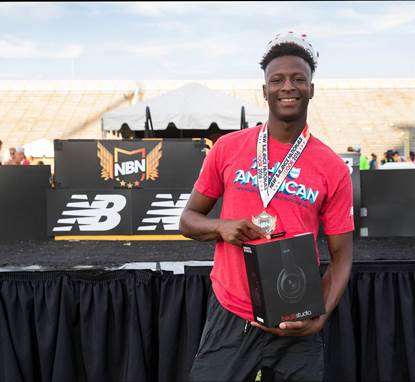 While McLaughlin’s times were obviously extremely impressive, that she produced such performances was not entirely unexpected.  The performances and victories Champion Allison produced, however, were probably not anticipated by any pundits or prognosticators.  The George Ranch, Texas junior came into NBNO ranked US#10 in the 400 with his 46.40 PR to win 5A state, but chose to race the 100- and 200-meter dashes, instead, saving his next one-lap efforts for this coming weekend’s USA Junior Nationals.  On Saturday, Allison qualified for the 100 final in 2nd overall with his 10.59(+1.7w).  Then a few hours later in the final, he won a razor-close final in a PR 10.44w(+2.4), with the first four finishing within .04.

Then in the 200 Sunday, Allison again qualified 2nd overall to the final (20.89, +1.1w) and lined up later that afternoon with a chance for a double.  Michigan standout Khance Meyers gave Allison a tough battle, but the Texan came on late for the 20.71 triumph – a wind-legal PR this time with another 1.1 wind and good for US#5.  Three weeks earlier, “Champ” had represented Team NSAF at the Barrientos Memorial in Cuba with a strong runner-up finish in the 200 and a very good leg on the winning 4x400.