The second in a 5-part series on some of the leading contenders and first-time athletes or relays that are highlighting the entries for the 2016 New Balance Nationals Outdoor.  Look for the next three installments of the series in the days leading up to the meet and check out the previous one --  THROWS  |  SPRINTS/HURDLES  |  DISTANCES  |  RELAYS. 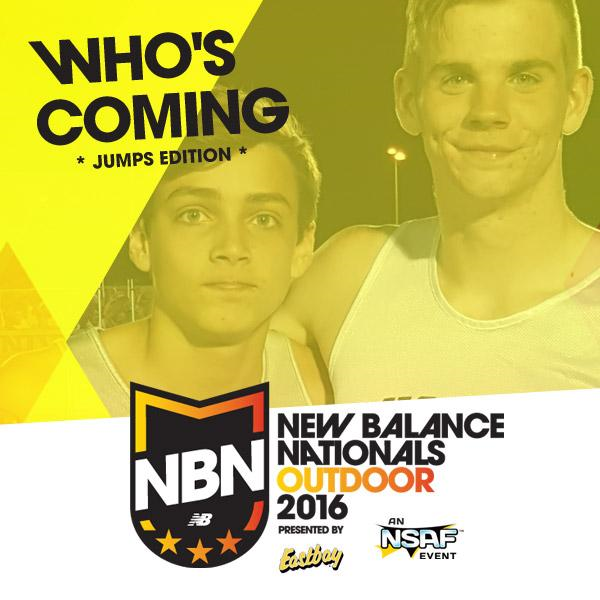 Five months ago, Chris Nilsen was a 17-0 vaulter, headed in mid-January to the Reno Summit and figured by national pundits to be one of several good athletes that would likely be in the shadow of Louisiana soph phenom and ’15 World Youth champ Armand Duplantis this year.  Duplantis would win at Reno with 17-6 to Nilsen’s PR 17-2, then set a national record 18-0.5 a few weeks later.  Even when he improved to 17-6.5 at the Big River champs in late February, Nilsen didn’t seem like a threat to Duplantis’ reign.  But in early May, everything changed when the Park Hill, MO senior flew over 18 feet in his conference meet, beating his younger rival to the barrier outdoors and suddenly becoming #8 all-time.

As stunning as that performance was, it was a prelude to what Nilsen would do 18 days later, thrashing the HSR with an 18-4.75 explosion at his sectional meet.  After settling for an average 16-9 vault to win Class 5 state, he finally had a chance to compete with Duplantis again at Great Southwest last weekend.  For the first time, two preps cleared 18 feet in one meet, but Nilsen prevailed with an 18-3 to Mondo’s 18-0.  In Greensboro, then, the two will have a rematch – or rubber match, if you will – with the meet record of 17-8.5 in grave danger and with the prospect of another HSR at hand. Incredibly, Nilsen was not yet a 15-footer just 14-1/2 months ago.  Who knew that when he then hit 15-4 in a small invite on April 2, 2015, that it was a first step toward a national record?

Before this past March’s NBNI, Rayvon Grey was a very good horizontal jumper with a growing national profile.  He first became a 23-foot long jumper during a runner-up finish at New York state outdoors as a soph in 2014.  Then during his junior year indoor season, he was 2nd at state again, then 9th at NBNI.  Outdoors, he was unbeaten in the LJ in NY, getting that first state title, with a 24-1, then leapt to a fine 4th at NBNO.  Then this past winter, he’d continued to progress, improving to 24-11.5 and – despite problems at state – coming into NBNI with a great chance to win.  And win he did, but no one expected what transpired – first, a 2nd round meet record PR of 25-7.75, then a 26-0.25 monster in round 5.  Suddenly he was history’s #3 prep indoors and had jumped further than anyone since 1989.

This was great, but the season’s other big boomer – Virginian Grant Holloway, who had nearly leapt 26 feet several weeks earlier – had passed up the LJ at NBNI in favor of a 60H/pentathlon double.  Would these two have a chance to clash outdoors, at least by nationals if not before?  The answer was yes, just seven weeks later at the Penn Relays.  Because of the always hyped action on the track, the Grey-Holloway showdown didn’t get the press it deserved, but Grey jumped well in less-than-ideal conditions and got the win with 25-2.5.  Unbeaten since and with another 25-2 performance in the books, the Beacon, NY senior will come into Greensboro as a big favorite and be eyeing another meet record (25-6.75), there for the taking.

There’s no girl in the history of high school track and field – perhaps no female at any level of the sport – who’s combined the triple jump and pole vault like NSAF Project Triple Jumper Chinne Okoronkwo.  Even before 2016, the Mountlake Terrace, WA senior had established herself as one-of-a-kind, with 41-10 TJ and 13-3 PV bests as a junior in ’15.  But now she’s improved to 42-11.75 – her winning mark at NBNI this past March – and 13-8, which she cleared at her conference meet.  Because she practices the PV so infrequently, she still pushes the pole on the ground instead of carrying on her run-up.  The potential she has at Wisconsin, where she’ll go to school at compete starting this fall, is kind of mind-boggling.

Fans won’t get to see Okoronkwo vault at NBNI.  Watching her triple, however, will be worth the price of admission.  She is currently the top seed by more than a foot and, even with an NBNI victory in hand, may feel she has a little to prove since her last national level outdoor meet – the Arcadia Invite a month after NBNI – saw her unable to defend her ’15 title there.  Okoronkwo also hopes that she can add to her resume of international meets, presuming she’ll jump at Juniors the following week.  She earned a spot on the USA 2014 Youth Olympic team in ’14, making the final, then was chosen for with Team NSAF for the first CSI trip to Cuba last year, then made Pan Am Juniors and medaled last year.

Rhesa Foster – All the way back

When Rhesa Foster leapt 20-2 in the LJ to take the bronze medal in the 2nd Youth Olympics in China two years ago, her future could hardly have seemed brighter.  She had had a great year in ’13 as a Clovis North, CA freshman, getting 3rd at CIF California State and winning AAU JOs (15-16).  Then as a soph, she was 2nd at the Youth Trials and Arcadia, had some injury issues through state, but bounced back for a great summer – including a 20-0.5 AAU JO triumph and capped off by the leap in Nanjing.  The Golden State LJ scene would be torrid again in ’15, but Foster would be right in the thick of it.

But just a month after China, she injured her knee during a September ’14 volleyball match and wound up needing reconstructive knee surgery.  Her entire junior season of track in ’15 was lost as she recovered.  Coming back this year would be tough, let alone getting back over 20 feet.  But Foster is no ordinary talent and indoors in Jan.-Feb. this year, she was already in the low 19s.  Then in the Redondo Nike Festival in mid-March, she hit 20-2.5 and was back into the U.S. top 5.  Hamstring issues have tempered her efforts recently, but last weekend at CIF again – which she missed in ’15 and struggled at in ’14 – she soared a lifetime PR 20-7.5 to beat favored Tara Davis and reach a level beyond her pre-injury best.  She’ll face other 20 footers in Greensboro, like Maya Evans and Taylor DeLoach – but after what she’s gone through, no mountain seems too high.

How often does an athlete pick up a new sport and, 2-3 months later, win a state championship – and in the largest division of one of the most competitive states in the nation?  You need to be very talented, obviously, but you also have to be well-coached, able to handle the pressure and learn a lot of things on the fly – things that it might take others years to figure out.  But that’s what Notre Dame-Green Pond, PA junior Greg Lauray has done.  Before March, Lauray had never high jumped in his life.  But he was a good basketball player with a penchant for blocking shots and high-flying slam dunks.

That doesn’t necessarily translate into high jump acumen.  But in the first meet of his life – March 31 after a few weeks of practice – Lauray cleared 6-10, not missing a bar until 7-0.  For several meets after that, Lauray was inconsistent, ranging between 6-0 and 6-8, including a 5th-place finish in his first Penn Relays.  Then he really got his groove going at his EPC/Colonial Conference meet, soaring over 7-1 to rank in the top 7 in the country.  He nearly bowed out of districts before winning at 6-5, then claimed the AAA state title at the height where it all started – 6-10.  He’s now the top entry at NBNO and, having competed at Penn, he may be ready to compete for a national title even with just three months experience!

It was less than three months, but it probably felt like an eternity to Landon Kemp.  At the MITS Michigan Indoor Championships, she won the girls’ pole vault and cleared the 13 foot barrier for the first time in her career.  It was a performance she’d certainly been thinking about for quite a while, especially after clearing 12-10 five weeks previously.  Now with 13 in hand, it was natural to think about improving more at the upcoming NBNI and continuing to progress through outdoors.  But it doesn’t always happen like that.  In New York, Kemp returned to the site of her Emerging Elite triumph in ’15, but in the championship division could only match that mark of 12-4.75 and take 7th.

Then outdoors, Kemp was unbeaten in Michigan through mid-May, having had mostly meets ranging from 12-0 to a best of 12-10 – probably not what she had in mind.  But then – finally – at the Metrohealth Sports Med Scholarship meet after her May 20 regional, she did it: Not only over 13 again, but all the way up to 13-3.  Suddenly the Greenville, MI junior wasn’t just a 1-time 13-footer any more.  Then last weekend at the Michigan D1 state meet, Kemp flew over a meet record 13-4 and into not only the nation’s top 10, but giving her the #2 mark among NBNO entries behind NBNI champ Carson Dingler.  Kemp also won the EE division at NBNO last year to match her NBNI finish.  But now she may finally be ready for much more.

Last weekend, for the first time in 2016, Dexter Neboh was beaten in a triple jump competition.  But even so, he can still claim he hasn’t lost to another American high school athlete this spring since the winner at the Great Southwest Classic – where Neboh was runner-up at 49-1.5 – was Javier Lowe from Calabar HS in Jamaica.  In any case, it’s been a pretty great season for the Odessa Permian, TX senior.  He hit a PR 48-7.5 in mid-March, then a few weeks later claimed a major title with a wind-legal 48-10.5 at the Texas Relays.  He stayed strong in winning his district, area and region meets, then popped a 49-5.5 to claim the state 6A crown with the best mark of all classes.

That’s a pretty good deal for a guy who was kind of out of the scene in ’15.  He decided not to compete for his high school but rather the West Texas Track Club, where he had a pretty low profile season until the World Youth Trials at June’s end in Illinois.  He won the TJ at 47-8, but it wasn’t enough to get picked for Team USA.  He won a regional JO meet after that, but that as about it for ’15.  He’s come back this year for Permian and it’s been a wire-to-wire success.  Now in his first NBN meet, he’ll face several other consistent mid-49 jumpers and, if he can perhaps hit that elusive 50-footer, the title will be his.

For all of the NBN appearances and All-American finishes high jumper Mikella Lefebvre-Oatis of Montreal, Quebec has had, it seems she would merit some special kind of award.  Has any Canadian athlete competed in as many NSAF meets?  This will be six NBNs in eight indoor and outdoor seasons for Lefebvre-Oatis, who won indoors in March at 5-9.25, and was 2nd indoors and 6th outdoors in 2015.  And, truth be told, it’s not just her.  Markham, ON’s Dallyssa Huggins – also the pentathlon champ – was 4th at this year’s NBNI and Canadians won back-to-back boys’ NBNI titles in 2013 and ’14 with Philip St. Hilaire and Paul Galas.

But no one has attended more frequently than Lefebvre-Oatis and she’s the only girl to win an NBN HJ title (though Huggins leapt 5-11.25 in the pentathon this year after her sub-par open HJ).  She’s now a Vanier College freshman, though still eligible in her fourth year of secondary school, and is headed to UCLA in the fall.  She repped Team Canada at the World Youth Champs last summer, won both Youth and Junior titles last summer in Canada, and was named Female Youth Athlete of the Year for 2015.