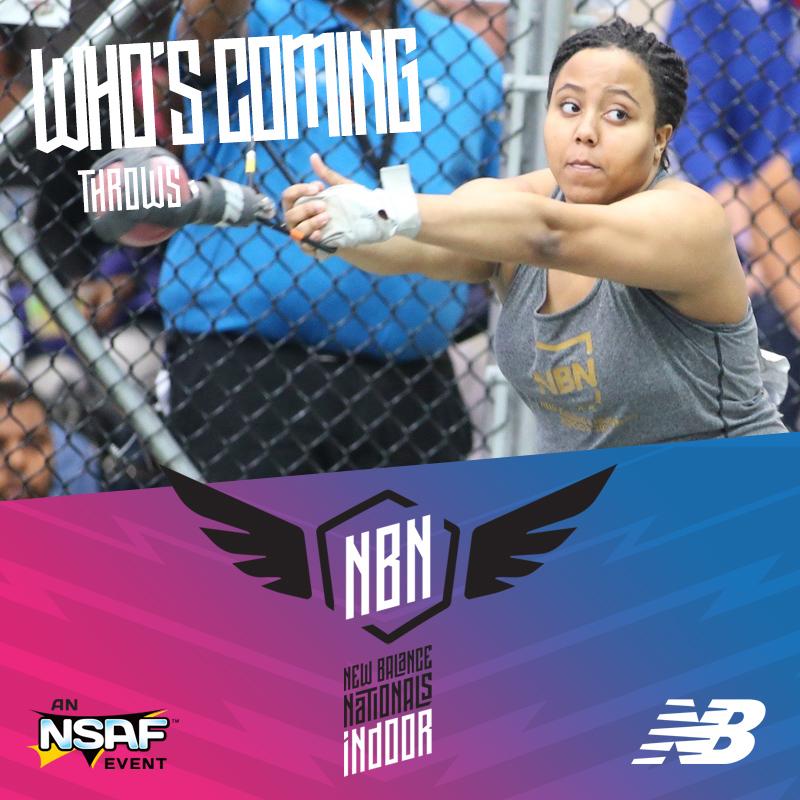 It was clear from at least the turn of the calendar year that thrower Monique Hardy – 4th in the NBNI weight throw last winter at 55-0.75 – was going to be a contender for the top of the podium in 2019 and chase the 60-foot barrier. She improved her PR by two feet to 59-7 during a Section V weekly meet the first weekend of January to move into the US#2 spot. But at the Trent Jackson/Cedric Walker Invite on Jan. 26, she suddenly reached a new level. With a mighty 62-9.5 heave, the Webster-Thomas NY junior took the national lead and ascended to #6 all-time. Suddenly Hardy could dream about even more than national titles: “I’m going for the national record, that’s 68 feet,” she told the local Democrat & Chronicle afterward (actually 68-2.5 by Shelby Ashe at 2011 NBNO).

By last weekend’s Millrose Games, Hardy was still the US#1 and meeting Cheyenne Figueroa – the previous national leader and also chasing 60 feet – for the first time this year. In case she had any doubts, Hardy found out she wasn’t unbeatable as she watched Figueroa do her own barrier breaking (see below) and finished with a runner-up 60-2.5. So motivation will be no problem when the two clash again during the final day of NBNI. Hardy will also be one to watch in the spring: At last June’s NBNO, she PR’d in the hammer with 184-3 and took the runner-up spot behind Samantha Kunza.

As mentioned above, Cheyenne Figueroa’s 2019 Millrose Games will be a memory she’ll never forget – while also possibly helping to launch a weight-throw rivalry that could have legs into 2020 and beyond. The Classical Academy (Providence, RI) junior – 5th at NBNI in 2018 – had started her indoor campaign in outstanding fashion, with December PRs of 55-10 and then a monster 59-11.5 that led the nation for about a month. Figueroa followed that with a series of meets between 58 feet and 59-11 – stellar, but perhaps frustratingly short of that 60-foot barrier. Meanwhile, Monique Hardy had that jaw-dropping 62-footer in late January that knocked Figueroa out of the top spot. Hence, last week’s Millrose Games clash could not have been more highly anticipated by prep weight throw fans.

The Millrose Junior Weight Throw lived up to the hype. On her third attempt, Figueroa launched a 61-0.25 that broke through the aforementioned barrier and stood up for the victory. She became the #12 thrower in prep history and fans can’t wait for the NBNI rematch. Amazingly, however, Figueroa doesn’t yet even have her school record. That’s because Classical Academy has one of the great national programs in the event, under Coach Bob Palazzo, and counts among its alums the great Victoria Flowers – the national indoor champ in 2008 with a then-meet record 61-4. Flowers’ school mark is 62-2, but Figueroa has more than a year to chase it and, as her Millrose victory proved, she knows how to come through in the clutch.

By Trey Knight’s standards, 2018-19 has been kind of a modest season so far. Yes, there was that explosion a month ago at the Washington Indoor Preview in Seattle, where he obliterated the national prep standard for the 35-lb. weight throw (the implement the collegians and pros use), reaching 67-11.75 (20.72m). That throw surpassed by more than two feet the previous best of 65-8.25 by Davis Fraker from back in 2010. Meanwhile, with the high school 25-lb. weight, the Ridgefield WA junior has thrown “only” 80 feet, five inches this winter – a national leader by nearly eight feet, but three feet off his lifetime best. To be fair, he’s competed with the heavier implement nearly twice as often the past four months (perhaps with plans to compete at the USATF champs) and his victory at the recent Boise Indoor was just his third meet of the season with the 25-pounder.

But now Knight’s road to defending his 2018 NBNI title – and perhaps beating his 10th-grade PR of 83-6.75 and Conor McCullough’s national junior class record of 87-10.75 – continues at this weekend’s Simplot Games. With additional focus there and beyond, it’s not hard to imagine he’ll break through … because that’s what he’s done during his whole amazing career to date. It was interesting to note that at last weekend’s Millrose Games in the pro/elite weight throw, the top three finishers – McCullough, Adam Kelly and Rudy Winkler – were all past NBNI champions in the event. Who would bet against Knight reaching the same lofty levels or beyond?

Throws fans can be somewhat forgiven if Aiden Felty was not quite on their national radar at the beginning of the 2018-19 campaign. The Innovation Academy Charter School (Tyngsborough, MA) senior had a best of 57-4.75 last winter, undefeated through his state division meet, but then just 16th at All-States and then 15th at NBNI. Then he improved to 61-7 outdoors – capturing that All-State title this time – then finishing 9th at NBNO. Even with those creds as a junior, it was eye-opening to see Felty crush that PR with an early season nation-leading 64-5 in his season opener in mid-December, then two weeks later at the Boston Holiday Challenge unleash a 67-0 bomb to extend that lead. Six weeks later, that’s still nearly two feet further than anyone has thrown this winter.

Felty has done a solid job of backing up that mark ever since, winning Dartmouth and then hitting a 66-footer at the MSTCA Coaches Invite. Now the clear favorite at NBNI, he still has his division and All-State meets to boost his resume. It’s interesting to note that Felty committed to Duke back in the late fall and, as he stated in an interview, did so largely because of his academic aspirations and an interest in majoring in marine biology there. So at that time, the Blue Devils knew they were getting a 61-footer. One wonders what they now think about having recruited the best putter in the country?!

Following behind an uber-accomplished older sibling in sports is never easy, but thrower Patrick Piperi – entering his final indoor and outdoor T&F seasons as a senior at The Woodlands HS (TX) – is doing pretty well, thank you. Appearing in two of the meets during the limited, but growing indoor campaign this winter in Texas, Piperi first won the Texas A&M shot put with a modest 60-2.75 heave. But a week later at the Carl Lewis Invite he exploded with a 65-1 PR, crushing his previous in/out best by more than two feet. Suddenly Piperi was #2 in the country, a spot he’s maintained since, and is a strong contender to challenge Aiden Felty for the NBNI title.

Piperi’s older brother, of course, is Adrian “Tripp” Piperi, a 2017 grad of TWHS who threw nearly 75 feet outdoors as a prep – and whose achievements included racking up scores of state and national titles and All-American performances. He medaled three times for Team USA in international completion while in HS, including the 2015 World U-18 gold. Patrick’s not there yet, but he did pick up an international victory for Team NSAF in the Bahamas last spring and has great opportunities in ’19 before he heads off to Texas to join Tripp. The Piperi brothers teaming up again as Longhorns is indeed an exciting prospect.

Could the favorite for the NBNI girls’ shot put be someone who has yet to compete this indoor season, nearly three months in? It could be if you’re Chloe Lindeman. The Fulton HS (IL) senior is not only the leading returnee from last year’s event, having made the podium in third place with a 47-2.5, but she holds the top indoor PR of anyone entered in the meet or who’s even competed this winter with her 48-2.5 best. That mark came two weeks after NBNI when she captured the Illinois Prep Top Times title. The late-starting indoor season in Lindeman’s home state is just gearing up, so it’s understandable that she hasn’t yet competed.

Lindeman was impressive enough as a junior in 2018 that she was invited to compete for Team NSAF in Freeport, Bahamas, where she and teammate Patrick Piperi swept the shot titles. Her achievements also include winning the Great Southwest shot as a soph in ’17 and taking the state 1A crown last spring. However, Lindeman has less than great memories of her last NBN meet, which was the Outdoor Nationals in Greensboro where she was 13th. Along with remembering her success at NBNI last March, the University of Wisconsin recruit will have plenty of motivation to make her final prep trip to The Armory a special one.