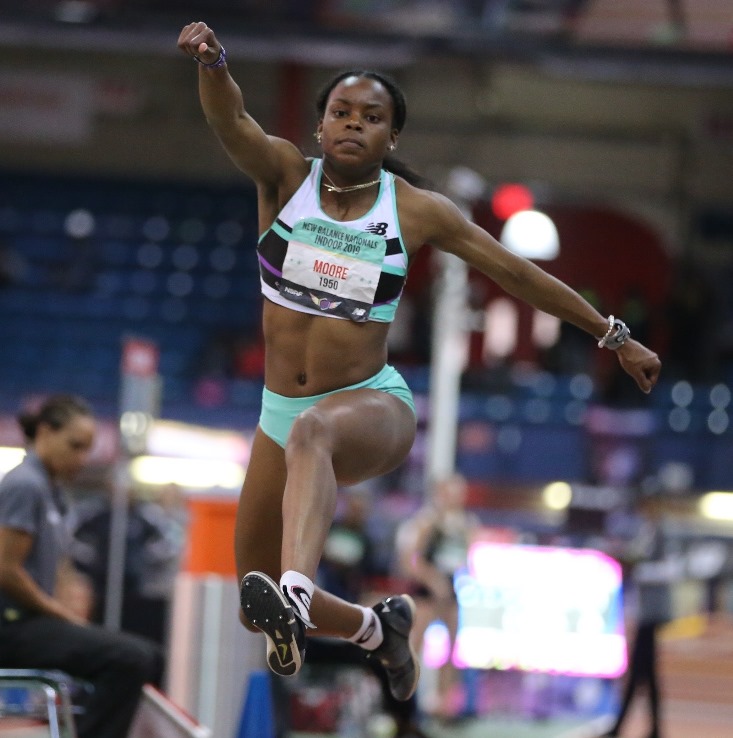 Few athletes in New Balance Nationals history have been more outstanding than Jasmine Moore (Mansfield Lake Ridge, TX senior), who captured her fifth and sixth horizontal jumps titles last weekend. Moore started Saturday by winning the NBNI girls’ long jump for the first time with a US#1 PR jump of 20 feet, 9.25 inches. She took the lead in the second round (20-3), relinquished it to Jada Seaman in the 5th round, then immediately regained it with her clutch winning mark, which moves her to #10 all-time. Moore had twice previously finished 3rd in NBNI LJ completion, as well as a bronze at 2017 NBNO.

The next day Moore was chasing the meet and national record in the triple jump – as well as her third straight title – and came up with another career-best effort. With a PR 44-2.5 on her fifth attempt, she not only took down Keturah Orji’s 2014 meet record (44-2), but also moved to #2 all-time – trailing only Ke’Nyia Richardson (44-6.75 in 2007) on the all-time list. Moore became the first 3-time champion in the event. The U. of Georgia signee will now turn her attention to outdoor, where she has two NBNO triple jump titles, a 2017 Pan Am Junior bronze and was a finalist at the 2018 World U20 Champs. She is the defending USA Junior champ, has outdoor PRs of 44-1 and 45-4.75w and is working on her 7th and 8th horizontal jump titles in UIL state meet competition. 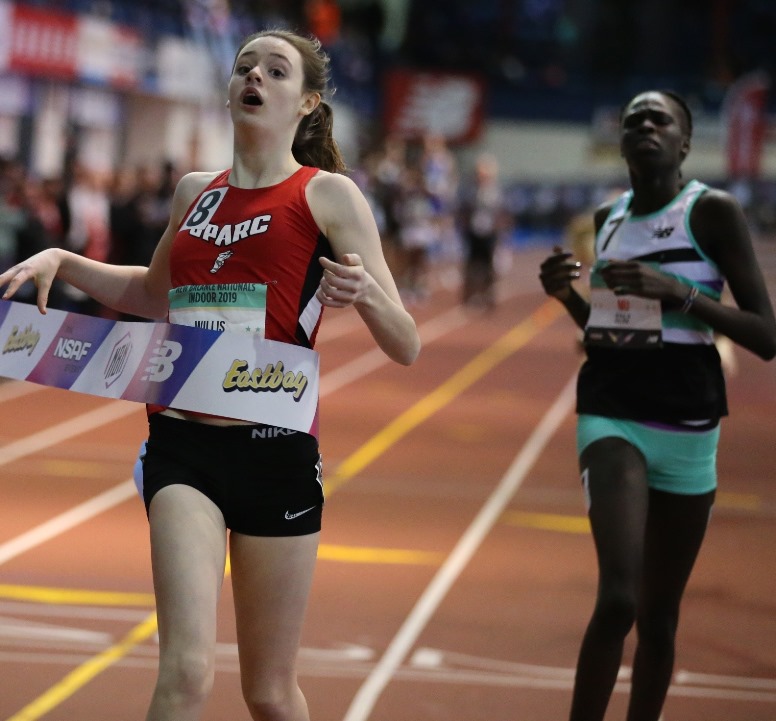 One of the most stunning moments of the 2019 New Balance Nationals Indoor was seeing Roisin Willis charge ahead of Athing Mu during the final stretch of the girls’ 800 meters Sunday and cross the line with a 2:05.70 victory. The stunning upset of Mu – the defending champ, US leader at 800 and American record-setter at 600 meters – was a sight to behold; the look of disbelief on Willis’s face was priceless. The Stevens Point, Wis. freshman came into NBNI having had a pretty great winter of her own: She had clocked US#2 2:06.91 for 800, plus 56.40 for 400 and 4:56.80 for 1,600. By improving just over a second, Willis surpassed the freshman national record of 2:06.48 set back in 2004 by Devon Williams.

Willis had already made her mark at NBN competition, having swept the indoor (5:05.51) and outdoor (4:59.18) Junior High miles in 2018. She had also run 2:09.18 as an 8th-grader before lowering her 800 times this winter. She had begun her prep career at Stevens Point by going unbeaten in XC until the D1 state final, where she was 4th. 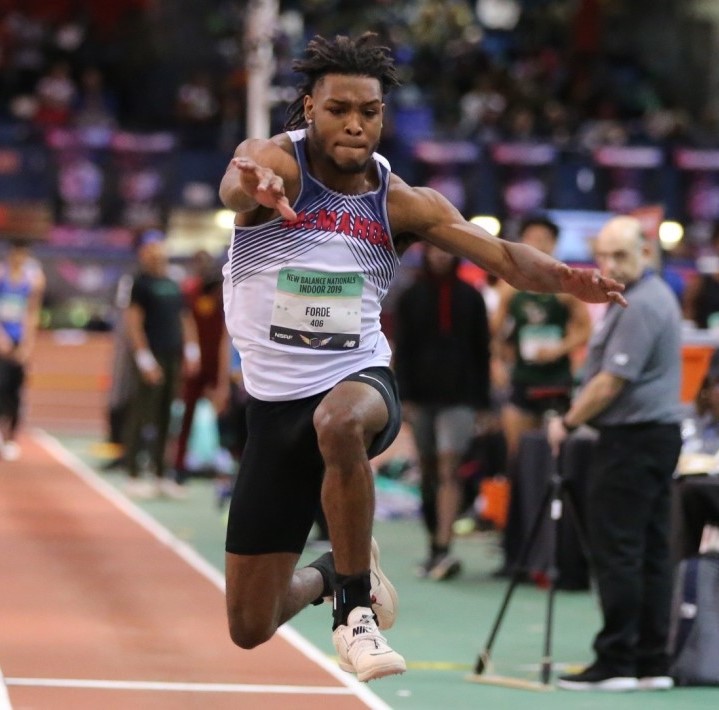 Even though it was the first time Justin Forde had triple jumped since mid-January and he’d barely practiced in his first week back from injury, he thought he had a big one ready on his very first attempt at New Balance Nationals Indoor last Sunday. The Brien McMahon HS (CT) senior indeed looked like his old self and when he landed in the pit after his first round attempt, the mark came up a monster PR and nation-leading 51-3!! That performance set the standard for the rest of the field to chase for five more rounds. Three others went over 50 feet, but none could catch the U. of Miami signee. His winning mark came within eight inches of the meet record and is #6 in meet history.

When Forde had to stop competing at the end of January due to injury issues with his heel, he not only missed an opportunity to compete at the Connecticut state championships in the triple-, long- and high-jump, but it imperiled his chances to make his mark at NBNI. Forde was 4th in the TJ at NBNO last spring (50-3.25) and 7th in the HJ (previous PR of 7-0). Then during the first half of the indoor season, he leapt 6-10, long-jumped 23-5.5 and triple jumped 51-0 at the VA Showcase to establish the nation’s #1 mark. But heel problems forced him off the track and into rehab mode at the beginning of February. 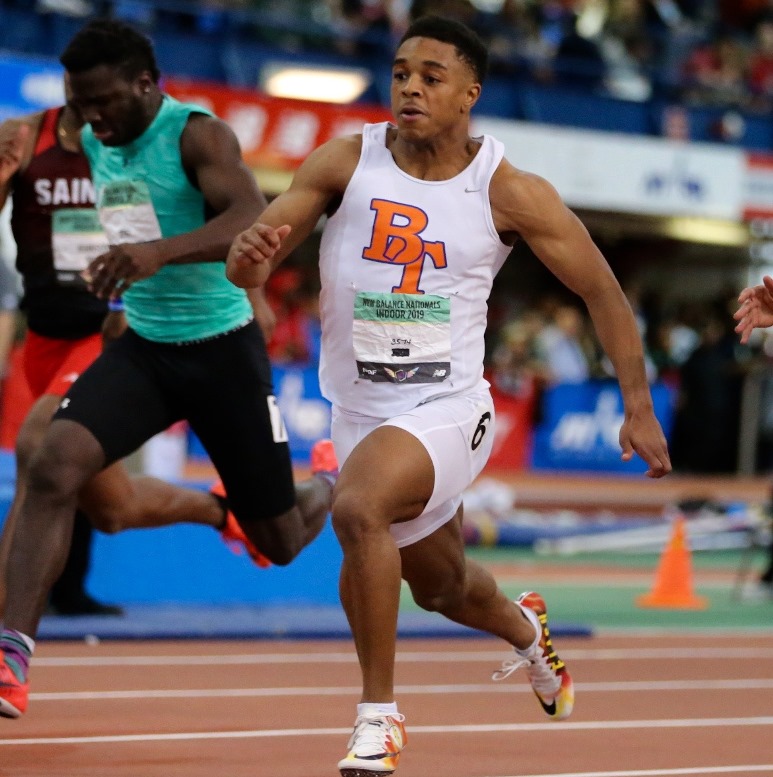 It’s just the first season of indoor track for Micah Williams and NBNI was just his third meet. But the Benson, OR junior measured his effort well through three rounds and came up with a huge victory against arguably the best boys field in the meet. First he won his prelim Saturday with a 6.76, the #2 mark overall. Then Sunday morning in the semis, he took the last of three semifinals in 6.78, the third best mark. Lance Lang led that round with 6.70, while Mario Heslop ran the same time (a PR) to lead the prelims. So going inot the final, you had four athletes with PRs of 6.70 or better – Lang (6.62 from KY Invite in February), Williams (6.64 at Simplot), Moore (6.65 in Iceland) and Heslop.

Williams, however, owned the final, striding decisively away to a 6.60 triumph – moving to #3 all-time. The mark was just .03 seconds off the national and meet record of 6.57 by Casey Combest from 20 years ago and just a hundredth off of Anthony Schwartz’s Armory mark from last year. Williams took down the national junior class record of 6.64 shared by Jeremy Rankin (2007) and Isaiah Brandt (2013). Williams started really making his name in 2018 when he finished 4th in the USATF Junior 100, made the U.S. team for the World U20 Champs in Finland, and ran anchor on the 4x100 gold medal squad. His NBNO victory more than confirms he’s still on the path of all-time greatness.