This is the last in a five-part series, a joint effort with the NSAF and Runnerspace.com, highlighting some of the exciting confirmed entries for the 2017 New Balance Nationals Indoor in each event category!  Previously: Part 1: Throws | Part 2: Jumps | Part 3: Sprints/Hurdles | Part 4: Distances 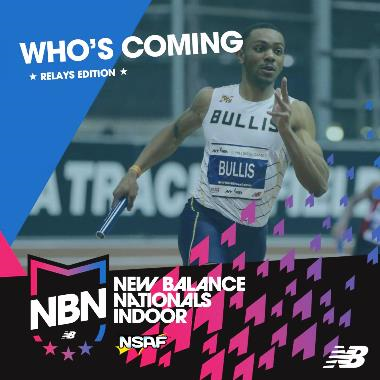 If there’s a national-class sprint/hurdle/relay powerhouse that’s truly yearning for that first (or 2nd and 3rd, etc.) national title, it would be the Bullis School out of Potomac, Maryland.  The program has been getting better and better every year under Coach Joe Lee and a wealth of assistants that have created something special.  Last March, their girls’ 4x4 squad was 4th in 3:43.92 (with a second squad in 6th at 3:51.55).  Then at NBNO, their girls’ 4x100 was 5th, 4x400 6th and boys’ 4x400 8th.  And this was with virtually no seniors.

This year, three of the girls’ squads rank 1st (4x400 at 3:44.44) or 2nd (4x200 1:37.30 and SHR 31.61), paced by sprinters Masai Russsell, Sierra Leonard, Lauryn Harris, Leah Phillips and Ashley Seymour, and hurdlers Alexis Postell, Cierra Pyles and Lindsey Lewis.  And the boys’ crews, paced by Eric Allen Jr. and his brothers Austin and Ashton, Jalen Hill and Olandis Gary, Jr., lead the 4x2 list (1:27.11) and are 4th in the 4x4 (3:17.68).  They are entered in each of these events, and among the favorites, as well as the sprint medleys.  Allen, Jr. is in strong medal contention individually in the 200, and other are scattered around other hurdle, jump and sprint events, in both the championship and emerging elite divisions.  They are “still” young and one gets the sense that the Bullis dynasty is only beginning.

When you think of Western Branch HS at New Balance Nationals, you probably think first of shuttle hurdle relay titles.  You might think they’ve won several titles in the event, between boys and girls, so when you see the number “13” next to the combined indoor and outdoor tally, it’s a little jaw-dropping.  The school has also claimed 10 national titles in other relay events, making a grand total of 23 championship-division titles with the stick that Coach Claude Toukane’s kids have claimed in the last several years.  It’s possible they could add at least a few this weekend.

Western Branch made a big statement early in the year, at the new VA Showcase, when they blasted 4x200 performances of 1:27.61 (boys) and 1:37.09 (girls).  The girls’ mark has held up as the national leader; the boys are #3.  The school’s boys and girls 4x4s are strong medal contenders, as well, and – as usual – both shuttle hurdle teams are at least co-favorites.  The girls are generally led by seniors Jada Terrell and Dajah Parker-Love, and sophomores Shadajah Ballard (US#1 55H) and Adrianna Shockley – among many.  For the boys, senior Micaiah Harris (33.22 300, 7.37 55H) is the clear leader, but Alvin Hamilton, Jahkwan Blackley, Garry Williams and Kavante Dawson are among other key players.

The great crews at Oak Park HS / Motor City Track Club, coached by Brandon Jiles and super veteran Robert Lynch, lost a great leader in 2016 when Anna Jefferson finally moved on to the collegiate ranks.  But with the emergence of 1:49 800 runner Cameron Cooper and a balanced girls’ attack, so to speak, the Detroit-area powerhouse is again in strong contention for several relay titles – plus Cooper in the 800, of course.  Jiles-coached relays – Detroit Mumford and now Oak Park (all Motor City TC) have captured six national titles over the years, including 4x4s, 4x8s and medley relays.

The US#1 Oak Park boys’ sprint medley, anchored by Cooper, probably has the best chance for gold this year – and their 4x400, with a 3:17.65 best, should be All-American – at least.  The girls are looking good in both the 4x200 – where they rank US#3 at 1:38.93 – and the 4x400, where they’ve clocked US#2 3:48.53.  Tamea McKelvy and Carlita Taylor have emerged as top seniors, while the youth movement is led by sophomore Janae Barksdale and freshman Aasia Laurencin.  Supporting Cooper are the likes of junior Donnie James and seniors Bryce Pickett and Dewan Hawthorne.

During a season filled with very good girls’ 4x800 performances nationally between 9:12 and 9:20, the girls’ of Shenendehowa were the ones who finally put together a mark truly worthy of topping a national list – 9:00.34 to win their state meet.  Shen’s middle distance girls had a stellar outdoor campaign in ’16, with an upset 4x8 win at Penn in 9:00.79, followed by the NBNO title in 8:50.58.  Seniors Emily Crounse and Danielle Jordan were lost from that team, but 2:07 performer Hannah Reale and Julia Zachgo returned – and plenty of other young talent has stepped up.  Shen is also the #2 DMR entry at 11:57.54 after defending champ North Rockland.

Senior Noah Affolder and sophomore brother Sam were superstars in New York before the family moved to Carlisle, PA, with Noah having run a 4:07 mile and 8:47 3,200 last year, among other things, and Sam having clocked a frosh national record 9:16.43 in the 3k steeple – along with other great marks.  Both have kept getting better and better at Carlisle and brought their teammates – such as Isaac Kole and Jack Wisner – along with them.  They crushed US#1 marks of 7:45.86 4x800 and 10:13.12 DMR at PA state, and in the latter will likely be battling with Brentwood, TN for the title Friday (with the Affolders running individual events Sunday).

When the girls of Miami Southridge – aka South Dade TC – go for the gold in the NBNI sprint medley relay Saturday, NSAF fans/staff/supporters will see some familiar faces.  Long sprint and middle distance stars Symone Mason and Kayla Johnson were part of Team NSAF at the Caribbean Scholastic Invitational last summer and each contributed key legs to the winning 4x400 at meet’s end.  They don’t get to run the SMR in Florida much, but with seniors Mason (52.80 PR, 53.26 this spring already) and Johnson (2:09.60 PR, 2:10.01 this year) on the last two legs, the distance should be ideal for them.  Of course they HAVE done the shorter medley relays – winning the 800 SMR and 2nd with a near-record 2:08.86 – just behind Union Catholic’s national record.  Shaniya Williams and Kaisa Cooper will likely be handling the 200 legs.

When the Kate Murphy-led girls of Lake Braddock, VA stunningly smashed the HSR in the distance medley at the VA Showcase in January (11:34.54), it laid down a challenge to the previous record-setters from last year’s NBNI – the girls of North Rockland, which finished ahead of Lake Braddock in that race.  The school from Thiells, NY had graduated two – Camille Cameron and Sydney March – from the quartet that not only clocked that historic 11:34.85 last March, but also won NBNO in dramatic fashion with 11:29.39.  Returning, however, was distance force Alex Harris and the uber-talented freshman Katelyn Tuohy – who has run a remarkable set of times from 600m to 3k.  They have only raced the DMR once this winter, an 11.51.0h, and now that Lake Braddock has withdrawn its DMR with Kate Murphy injured, the challenge isn’t as dramatic.  Still, there’s a time out there to shoot for and with 2:22 800 runner Haleigh Morales and 41.09 300 runner Sofia Housman added to the mix … there’s a chance!