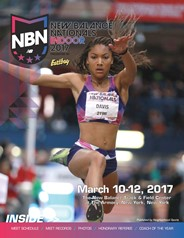 Note: This is a longer version of a story that appears in this weekend's NBNI meet program. Tara started her weekend Saturday by winning the long jump with a near-meet record 21-2.75 and qualified first (tied) for the 60m hurdles semis.  Along with the 60H, she will compete in the triple jump Sunday.

Our 2017 NBNI cover subject, Agoura (Calif.) HS senior Tara Davis, is the meet’s top returnee in both horizontal jumps, set a new national prep record in the long jump this winter, and could be one of the biggest stars at Nationals this weekend. 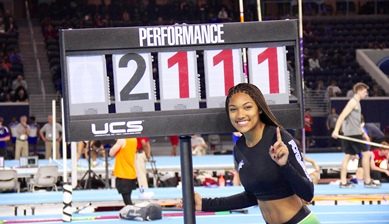 few weeks ago, on February 10, she exploded with a 21-11 long jump, breaking the previous U. S. high school standard of 21-7.5 that had been set by Olympian Carol Lewis 36 years earlier. As of late February, when this program went to print, Davis also led the nation in the 60-meter hurdles (8.22 seconds in her Simplot Games victory) and ranked second in the triple jump (41-9).

Here are some of Tara’s thoughts on different topics, and some of her “tips” for other top athletes:

On her motivation for “coming back” after missing World Juniors last year:

“I have never trained so hard in my high school career as I have this year. After winning the World long jump title in 2015, I came into 2016 with a sense of accomplishment and didn't push myself like I should have. Unfortunately, it cost me a spot on the World Junior team. I was disappointed and I knew why. If you just go through the motions, you won't be successful. I felt like I let myself down and I didn't want to 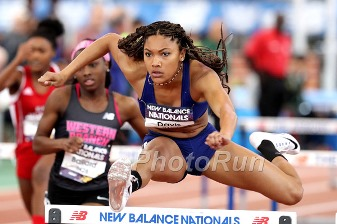 have that feeling ever again. I made sure to write myself a personal message on my white board about how I was feeling. Now every morning I wake up to this message and I tell myself that you don't want to feel that pain you had, so push harder every day.”

On her reaction to her national record long jump:

“In all honesty, I didn't think it was a good jump. My form felt off and it just wasn't what I wanted. In the video, you can tell I mouthed something; I told my dad I had got over myself. I thought it was going to be at least a high 20, and then when the lady said 21-11, my heart dropped and I immediately thought about the national record.”

On rising to the challenge in the Simplot 60m hurdles versus Australian star Celeste Mucci (who led the prelims at 8.26):

“In the prelims I was just running to get into finals. I wanted to work on my form and snapping my lead leg down. When I finished with 8.31, I was beyond shocked! I had no clue it was going to be that fast. In the final (8.22 victory), I just knew I had to get a good start and carry myself through the race. I had to stay calm in order to stay with her.”

For overcoming adversity in training and competition:

“In training, I remember how good it feels to accomplish my goals, and I also realize that there are always athletes working as hard as or harder than me to achieve their goals. In competition, I just have to remember what I’m out here to do, and ‘trust the process.’” 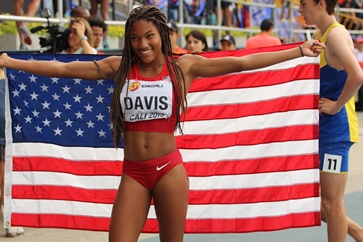 For using/enjoying social media, but not letting it get out of control:

“Think about who is seeing it, and whether you would want your parents or grandparents to see outrageous comments and post on your profile. Think of how it makes you look. Try not to let social media be your social outlet; you might be feeling a certain way at that moment, but when it’s posted that emotion is locked in and you can’t take it back.”

For eating enough to stay fueled for training and competing, but still staying toned and fit:

“I love to eat junk food; it’s my biggest weakness. This year I have been trying to work on it. In all honesty I cheat sometimes ... okay maybe a lot. But I have to balance out what I’m taking in with protein and healthy snacks. I still have a routine of working out.”

For balancing school and track:

“It does get a little congested, but having that sparkle in your eye with the teachers helps a lot, and showing the hard work in the classroom pays off. The main tip is to communicate with your teacher, so they know you have a hectic track schedule and might be missing class. Always try to get ahead and not behind.”