This is the fourth in a five-part series, a joint effort with the NSAF and Runnerspace.com, highlighting some of the exciting confirmed entries for the 2017 New Balance Nationals Indoor in each event category!  Coming later today (3/9): Part 5: Relays | (previously) Part 1: Throws | Part 2: Jumps | Part 3: Sprints/Hurdles 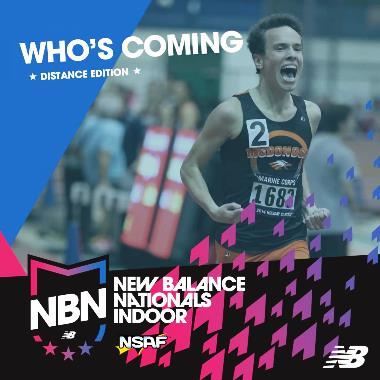 A junior at McDonogh HS in Maryland, Dalton Hengst has been a pretty good distance runner with impressive range for awhile now.  As a freshman, he progressed during the season to 1:55.88 in the 800, 4:17.12 in the 1,600 and 9:27.16 in the 3,200 (indoor).  He also made stellar NBN debuts, winning the Freshman mile indoors, then the 9th-grade 2M outdoors.  Hengst continued to improve last winter, hitting 4:11.42 for 7th in the NBNI mile and was also 7th at Millrose.  He continued strongly outdoors early on, but struggled somewhat late season.

Now after his best XC season this past fall (21st in San Diego), Hengst has been taking the next steps this winter toward becoming a true national title contender.  After a series of solid marks early, he won the huge Yale Classic 3k at 8:28.51 for his first truly national-class mark at 3k/3200/2M.  Then he got an invite to Millrose, where he was 3rd behind Noah Affolder and Brodey Hasty with another major PR at 4:08.99.  Now he’s entered in the mile here at NBNI, his PR second only to defending champ Reed Brown, and ready to make a run at the top.

Brie Oakley doesn’t want “the streak” to end with her.  Every single year since 2011, a new national record has been set in the NBNI 5,000 meters and Oakley – who was unbeaten in XC last fall and won the Gatorade National Runner of the Year award – is quite aware of the fact and wants to continue the tradition.  This tradition is certainly one of the more amazing stats about NBNI.  You could argue that the record wasn’t that stiff at first, but when Erin Finn ripped a 16:19.69 in 2012 and Wesley Frazier claimed it with a miracle finish over Finn the following year, the strength of the field began to hold up against the rest of the championship events.  You could argue that each successive year, the best distance girl in the country has tackled the 25-lap race – and each year since, so far, has improved the record.

So can Oakley take the mark closer to 16-flat, or maybe sub-16?  Like many who attempt it, she hasn’t run a track 5,000 before.  The Grandview, CO senior was a rising distance star as a junior in XC and track, but not really in the top national echelon until a stunning and unexpected 10:08.89 2M PR last June.  That set the stage for an unbeaten XC campaign where she had huge, fast wins at major meets like Woodbridge (CA) and Liberty Bell (CO) and was barely challenged in rolling to a national title.  Indoors this winter, she ran a relatively modest 10:41.42 2M, then a more attention-grabbing 4:48.53 1,600 to win Simplot.  If Oakley’s fitness is what it was at its peak in XC, she’ll seriously challenge Weini Kelati’s 16:08.83 meet record and HSR.

Highly regarded Motor City TC/Oak Park HS coach Brandon Jiles has developed a lot of great talent over the years, especially with relay teams – mostly girls – that have racked up some four NBN titles and many All-American honors.  He was a fast 400/800 guy himself and he’s had some good ones at 800, the best of which until now was Isaiah Ward (1:52.18) nine years ago.  But he’s never had anyone like Cameron Cooper.  The Oak Park MI senior’s youthful look and quiet modesty belie an athlete who bursts from the line and rolls around the oval at a tempo no one else can maintain.  He impressed from early on, running 1:56.47 as a freshman.  Then as a soph in 2015, he had a big 3-second drop to win the Emerging Elite 800 at NBNO in 1:52.06.

Cooper went on that summer to place 2nd in the World Youth Trials and then advance to the WY semis in Cali, affording him valuable experience.  Then off a 1:54.47 best coming into NBNI last March, he was in the unseeded Championship 800 where his winning 1:50.97 was fast enough to place 3rd overall.  After a nearly unbeaten spring in Michigan, he went under 1:50 for the first time at NBNO (1:49.71) for the runner-up spot.  This winter Cooper has kept blazing indoors, unbeaten at 800 and hitting 1:52.43, 1:50.07 and finally 1:49.82 at Kentucky – the #2 all-tracks prep mark in history.  His showdown this weekend with 1:48 outdoor performer Brandon McGorty is not to be missed.

With her head-shaking resume of fast times, NBN individual and relay titles (6) and even global titles – the 2015 World Youth and 2016 World Junior 800 crowns – no one doubted that Sammy Watson could be in for a truly stellar, record-breaking senior year at Rush-Henrietta, NY.  Watson’s talent was apparent from the beginning, pre-high school, then throughout her freshman year as she showed great long sprint-to-XC range and hit 2:15 for 800 during the prep season.  But the shocking 2:06.35 breakthrough at USATF JOs that summer set the stage for what was to come.  As a soph, she then not only started running consistently fast – from 52.69 for 400 to 4:25.24 for 1,500 – but showed a real knack for knowing how to compete and finish races.  She hasn’t lost to a prep at 800 since 2014 (and rarely at other middle distances).

Watson’s senior year, however, has still exceeded almost everyone’s expectations.  Not really known as a record-chaser/breaker before, she has five – yes, FIVE – national HS records this winter.  It doesn’t hurt that she’s consistently raced the faster pros and elites this winter, but to say she’s made the most of opportunities would be an understatement.  The first standard was vs. preps, a 1:28.67 600, but then against the likes of Ajee Wilson, she crushed that mark with a 1:27.13.  Then in the elite Millrose 800, Watson broke the oldest prep indoor mark on the books – Mary Decker’s 2:01.8 – with her 2:01.78.  Then at the USA Champs last weekend, she twice took down the 1,000m record – first by a little in the prelims (2:40.72), then a lot in the final (2:40.72).  That brings us to this weekend where the 2-time defending 800 champ is moving up to a new challenge.  What can Sammy Watson do in the NBNI mile?


Reed Brown – Not an underdog this time

Sometimes you can win an NBN title without being in the fastest section.  It’s happened a few times, mostly in middle distances, and so it was last March when Reed Brown kicked to a 4:09.95 victory in the early unseeded mile race.  Those in the final, seeded section either couldn’t or wouldn’t match that kind of tempo, as Gavin Gaynor’s 4:10.02 left him .07 short.  Brown’s best coming into NBNI was 4:16, not fast enough for the top race.  Since then, however, the Southlake Carroll TX senior has proven that victory was no fluke.  At his 6A state meet last spring, he traded victories with Sam Worley with blazing 8:50.43 3,200 and 4:04.82 1,600 marks.  In the summer, he clocked 4:04.73 for a full mile.

This past fall, Brown kept progressing.  He had some fast victories in XC, but was “only” 4th in a very close state meet finish.  Brown then qualified for both national meets and, despite having not won since his Texas Region 1 race, stunned everyone by triumphing in San Diego.  In prepping to defend his NBNI title, he’s run just two indoor meets.  But the latter, a 4:06.40 mile triumph at the new Dunamis Meet near Dallas, more than proved he’s ready.  With 4-flat miler DJ Principe opting for the 2-Mile, Brown now is the unquestioned favorite for the mile this weekend.  It will be fun to see how he handles that role.

Coming into her senior year at Patuxent HS in MD, Hayley Jackson was a talented all-around distance running – with PRs of 2:17 800, 4:55 1,600, 10:37 3,200 and 17:36 for 5k XC.  She was clearly one of Maryland’s best, having won nine small school state titles, but had not made a national impact.  But that began to change this fall.  She put it all together for a fine 6th place finish at Foot Locker Northeast, then was a surprising 8th in the final in San Diego.  Obviously, it was hoped she would carry it over into indoor track and, with an eye-catching 4:52.32 1,600 triumph to begin her season in mid-January, it was apparent she was going to do just that.

Jackson was invited for the 1k at the Armory Track Invite, her first race at the distance, and ran a fine 2:50.70 for 3rd.  She was selected for the Millrose Mile, where she ran a solid 4:55.75 for 5th.  But the next big breakthrough came at her 2A state meet, where Jackson stunned even herself with a 4:45.55 PR – taking over the national lead in the 1600/mile.  Now in her first NBN meet, she’s the mile favorite during a year without any super-fast 4:40 types in the field, but facing the above-mentioned Sammy Watson – who has a 4:22 1,500 PR and obviously extremely good creds at shorter distances.


Brodey Hasty – Kick will be tested

This winter, the progress has continued for Hasty, whether it be in individual efforts or DMRs with his Brentwood teammates.  He was invited to Millrose and his best race of the season came there, with a 4:08.04 PR for second.  Now Hasty’s first NBN meet should be fun.  The Brentwood DMR matches up pretty well with Carlisle PA for a Friday night showdown, with Hasty and Millrose winner Noah Affolder (4:07.04) the respective anchors.  Then those two, plus Principe, will highlight the 2-mile on Sunday – with all three having sub-8:50 potential.

Any survey of the great Saratoga Springs NY distance program under legendary coaches Art and Linda Kranick would include all-time lists of great individual runners and relays that would top that of many states.  The list includes, but his hardly limited to Cheri Goddard, Erin Davis, Nicole Blood, Lindsay Ferguson, Hannah Davidson, Caitlin Lane, Keelin Hollowood and many more.  Now current sophomore Kelsey Chmiel has earned her place on that list, and perhaps before she is done at the school she will be considered the greatest at Saratoga.  Her most recent race was her best: A US#2 and NY indoor state meet record 9:26.28 3,000m – good for #7 on the all-time list and a soph class national record, adding to her frosh class mark of 9:41.73 in ’16.

Chmiel was tearing it up from the start at Saratoga, running 9:52.87 for 3k as an 8th grader.  Then she made top three in both the state and Federation XC meets as a frosh in 2015, followed by a surprising 4th at nationals in Portland.  Chmiel was 13th in the NBNI 2-mile last winter, then improved to 6th in the same event at NBNO in June.  This winter, she earned selection in the Millrose mile, where she was 3rd, but the 3k on up is where she really thrives.  Chmiel is entered in the 2M at NBNI this weekend, where her stiffest competition could come from the above-mentioned Brie Oakley – who will be doubling back from the 5,000.  Don’t be surprised if Saratoga’s roster of national champions increases by one Sunday.