This is the third in a five-part series, a joint effort with the NSAF and Runnerspace.com, highlighting some of the exciting confirmed entries for the 2017 New Balance Nationals Indoor in each event category!  Coming in the days ahead: Part 4: Distances  |  Part 5: Relays | (previously) Part 1: Throws | Part 2: Jumps 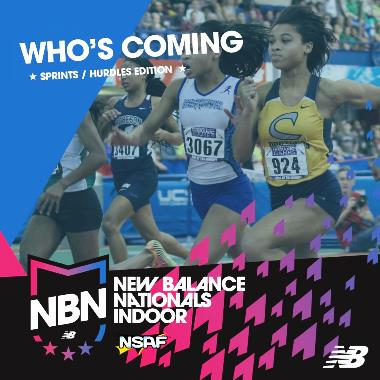 Chanel Brissett – The favorite this time

A year ago, Chanel Brissett was part of the mass finish during the greatest girls indoor hurdle race ever.  Then a junior at Cheltenham HS (PA), she was 5th in 8.23 – as Tonea Marshall broke her own HSR with 8.02 and six girls ran 8.24 or faster.  In fact, just .02 separated 3rd from 6th places.  If Brissett felt a little lost in the elite shuffle, she didn’t by the time June rolled around.  In an equally loaded 100m hurdles field at NBNO with many of the same players, she triumphed over Marshall, Anna Cockrell and defending champ Tia Jones in a meet record 13.01.  That’s not to say Brissett wouldn’t have a few more ups and downs in ’16.  She faltered in the USA Junior 100H, taking 6th and missing a Team USA berth.  Then at the Olympic Trials, after a stellar PR 12.95 in qualifying, she was 18th overall in the semis.

So there’s still plenty in 2017 to motivate Brissett – now a USC signee – starting with NBNI.  Many of her rivals have graduated, but Jones, super jumper/hurdler Tara Davis and others are still there to provide stiff competition.  Brissett started her season a little later, hitting 8.60 in late January, then a near-PR 8.30 in mid-February.  Now she’s coming off a super state meet weekend, where she won the 60H with a PR and US#1 8.14 – #3 all-time – and also PR’d in the flat 60 at 7.45.  If the consistency is there, Brissett could be unbeatable at NBNI and beyond.


Tyrese Cooper – No flash in the pan

It wouldn’t have been shocking, from a historical perspective, if major or minor injuries or a variety of other factors slowed the runaway freight train that is Tyrese Cooper in 2017.  History has shown us that more often than not young track and field phenoms that smash records in 9th grade or earlier will at some point plateau or even regress for a number of different reasons.  Cooper had a 9th-grade year in 2016 like no other, smashing freshman class records left and right (at distances from 60m to 400m), winning state titles and other major meets, and even claiming the NBNO 400m (45.69) and US#1 (45.23 at AAU JOs) marks last summer a never-to-be forgotten campaign.

Well, it took basically one mid-January weekend to dispel any thoughts that Cooper might have any drop-off in 2017.  In his first meet of the year, the VA Showcase, the sophomore shredded the new Liberty U. oval with a 33.03 national record 300m, then nearly topped the 500m standard in an epic victory over Chantz Sawyers.  Since then, he’s continued to show improvement, moving to #2 all-time in the 400 (46.01), setting another soph class mark in the 200 (21.12) and breaking his own 300 mark (32.87).  Now at NBNI this weekend, he’s signed up for the 60, 200 and 400 – and lest anyone forget, he has unfinished business at this meet given the DQ suffered last year in the 200.  Doubling the 400 and 200 – both finals close together on Sunday – is considered nearly impossible.  But don’t put anything past Tyrese Cooper at this point.


Sydney McLaughlin – Adding to her legacy

It’s kind of hard to believe that in about 3-1/2 months, Sydney McLaughlin’s prep track and field career will be finished and the Kentucky signee will be moving on to the next level.  From when she first set the track afire as a Union Catholic, NJ freshman – running a 9th-grade record 38.55 300 meters at The Armory on Dec. 21, 2013 – she’s enjoyed a career that ranks high among the greatest in any boys’ and girls’ events.  She has won nine NBN individual and relay titles, thrilling fans with unfathomable anchor leg comebacks and a handful of national records.  McLaughlin’s legacy as an all-time prep great was cemented last summer when she earned an historic 400m hurdles Team USA berth in the 2016 Summer Olympics in Rio and, this winter, she has continued to prove she belongs among the world’s elites when she ran a strong 400m leg on a world-record-setting U.S. distance medley relay squad at the New Balance Indoor Grand Prix.

McLaughlin’s greatest achievements have come in the 400m hurdles outdoors, but her NBNI record is outstanding, too – even if compromised a few times by injuries.  In 2015, she captured the 60H title in 8.17, then last year topped the legendary 400m national record set by Francena McCorory in 2006 with her 51.84 triumph AND finished with another of those stunning come-from-behind anchors in UC’s winning 4x400.  This winter, McLaughlin has chased and finally beaten McCorory’s 300m standard as well, running 36.82, and run a fast-enough flat track 400 time – 53.17 at her Meet of Champs last week – to indicate she’s ready to surpass her own mark in that event.  While she’s passing on the long jump (where she stands US#3 with 20-7.25), one can bet on McLaughlin being ready to add the 400 and 4x400 to her list of NBN titles this week.


Trey Cunningham – Dazzling speed, with and without hurdles

Someday, Trey Cunningham and Marcus Krah might laugh about their fantastic duel in the Caribbean Scholastic Invitational 110m hurdles, where they authored a great 1-2 finish, Cunningham handing Krah his only loss of the outdoor season in a race where the winner was very much in question and, well, a bit disputed.  Krah would go on to win NBNO, USA Junior and World Junior titles; Cunningham would just miss victories in the first two of those races and get nosed out of qualifying for Team USA.  Still, the Winfield City, AL junior had come a long way in ’16, starting with the indoor performances in the Birmingham Crossplex last winter that got him invited to NBNI (4th with 7.71 in the 60H), Team NSAF for CSI and NBNO in the first place.

Now the calendar has flipped to 2016-17, Krah and rival/2016 60H champ Grant Holloway have graduated, and Cunningham has already taken a giant step in becoming the fastest indoor prep hurdler of all time.  The senior got rolling with a 7.63 in December, improved to 7.59 in mid-January and then became the inaugural member of the sub-7.50 club with his 7.49 in the state last chance meet Jan. 28.  Cunningham closed out the season with a 7.54 victory at state.  He also found time to dash 6.78 over the same distance, standing at US#2 – but he’ll stick to the hurdles at NBNI.  Can he lower than 7.49 further after five weeks off from the event?

As far as having a fabulous prep track and field career, Jayla Kirkland has checked off most of the boxes going into her final few months.  A ton of (6A) state titles, check.  An NBNO 100 meter title (PR 11.33w)?  Check.  A 200 crown later in that same 2015 meet to give her a sprint double?  Check.  A defense of that 200 title a year later (PR 23.15)?  Another check.  And how about not one, but two Team USA berths before her senior year, including a bronze medal in the ’15 World Youth Champs!  Yes, it’s quite a resume, and Kirkland still has an NBNI and a whole outdoor season left.

But ah, about that NBNI.  That’s what’s missing from the Woodlawn, AL senior’s medal and trophy collection, so to speak.  She did win the freshman 60 dash in meet record time in ’14, but was 7th in her one championship final appearance – last year’s 60.  This year, however, could be different.  The recent Kentucky Invitational, coming two weeks after Kirkland’s indoor state meet, was revelatory in terms of proving she’s ready to medal or win.  Pushed by Lynna Irby, she blasted to a big PR 7.34 in the 60, surging into the national lead.  Then in the 200, she was second to Irby with an indoor PR 23.88.  She’s entered in both, where the competition will be stiff.  If that extra gear of speed is evident again for Kirkland this weekend, don’t bet against one or more high podium finishes.

Allison was one of the most unlikely of championship doublers and, after taking 3rd in the USATF Junior 400 – in a near-PR 46.63 – he made Worlds in the 4x4.  There he helped Team USA to gold to compete an amazing junior year.  So what might he do as an encore as a senior?  After signing with Alabama, he’s kept a relatively low profile to start 2017 … but with a 21.22 at Texas A&M in January, he proved fitness and still holds down US#3.  Will hard training and a light racing schedule since, pay off in a high podium finish or even a win for the “Champ” in furlong?  Last June showed it’s never wise to count him out.

The NBNI Championships – and, to a lesser extent, NBNO – have proven pretty attractive to top Canadian preps and they’ve done pretty well here over the years.  Some past champions from north of the border include Dylan Armstrong (1999 boys’ weight), Ariane Beaumont-Courteau (2009 girls’ pole vault) and Charles Cooper (2014 boys’ 2M), while stars like Kailee Sawyer (2:05.94 800) and Andre Ford Azonwa (6.67 60) have claimed strong All-American honors.  And some, like Victoria Tachinski, keep coming back.  Commuting all the way from Winnipeg, Manitoba, Tachinski will be competing in her third NSAF event.  In 2014, she won the NBNI Emerging Elite 400 in 55.42, setting an EE meet record that still stands.  Last March, she ran a very fast championship 400: 53.97 – a mark that would have won all but two other years, but in 2016 had to settle for being closest in pursuit of Sydney McLaughlin’s HSR 51.84.  But last June in Greensboro, she was the one gapping the field with her 2:03.97 800 victory.

Both of those NSAF performances were close to her 53.38 and 2:03.58 PRs, which she took to World Juniors last summer in placing 6th in the 800 final behind Americans Sammy Watson and Aaliyah Miller (she also made the 400 semis in the ’15 World Youths).  Then at Simplot last month – another favorite U.S. destination for her – Tachinski blasted a 53.40 for her 3rd straight win at the meet.  At NBNI, the Vincent Massey Collegiate senior will enter the EE 200 and championship 400, as she did last year, and again will be challenged with chasing McLaughlin.  For those U.S. fans who enjoy watching her race, the opportunities won’t end after this year – she’s a Penn State signee!


Brian Herron – The greatest in any other time

In an alternate universe – or even back in, say, 2012 – American prep track pundits everywhere would have been talking about the singular and historical excellence in the sprints of Brian Herron – running barely fathomable times for a freshman (and now as a sophomore) in the 200 and 400, both indoors and out, and blazing a trail as potentially the best young sprinter ever.  As fate would have it, however, Herron’s Class of 2019 status matches that of one Tyrese Cooper – who himself has run even more spectacular times from 60 through 500 and amassed most of those headlines.  Imagine, for example, running 47.39 indoors in the 400 as a freshman, 46.29 outdoors, then 47.13 indoors as a soph – and not even ranking first in your class.

But the Lakeside Dekalb, GA soph just keeps rolling, keeps getting better.  He eventually tied Cooper’s indoor 9th-grade 400 mark at NBNI last year, winning the EE 400 (his 47.97 would have been 4th in the championship, and has improved to 21.22 in the 200 this winter to go along with his 47.13.  This time he’s in the championship 400 – and only that event – at NBNI, and it will be the first time he’s raced Cooper since they were in middle school.  And … that’s “if” Cooper stays entered in the 400, as part of his weekend, since he’s also entered in the 60 and 200.  Could Herron pull off the upset?  It will be interesting to see what he does with the opportunity.