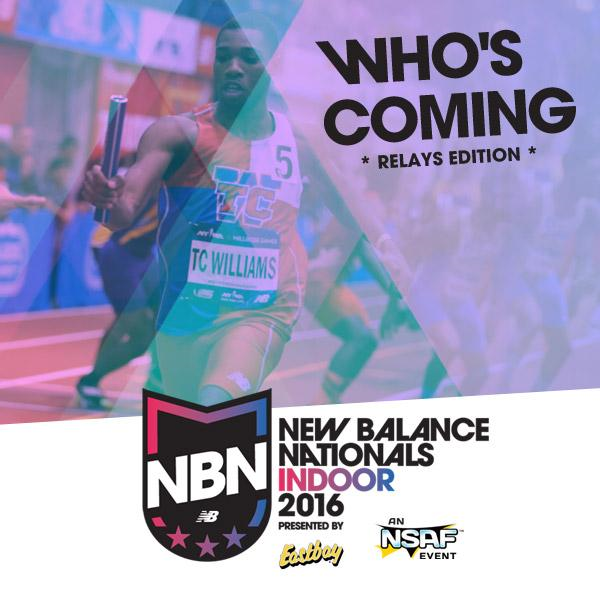 Last in a 5-part series on top athletes coming to the 2016 NBNI.

You might think the Lyles brothers, Noah and Josephus – both seniors at T.C. Williams, though Noah’s about a year older – have accomplished all there is to accomplish in high school track.  Noah swept the NBNO and USA Junior 100 and 200 last spring en route to national athlete of the year honors.  Add in Josephus’s back-to-back NBNO 400 titles and Noah’s 2015 NBNI 200, that’s five national titles between them.  Five is also the number – incredibly – of Team USA berths they’ve earned between them in five different international meets in their combined first three years of HS.  Those berths have resulted in three gold and seven overall individual and relay medals for them in those meets.  But one thing the brothers Lyles have never accomplished that they’d like to add to the tally this weekend at NBNI is this: A major relay championship.

The bros and their teammates have done some damage with the stick before, including a 3:12 at Penn Relays last spring as they made the final, but nothing significant at NBN meets.  This winter, there’s been some emphasis on 4x200s at big invitationals, and – with fellow senior Tre’kel Locket and soph Kai Cole – they have twice run nation-leading clockings of 1:27.29.  So they are the favorites in a good field and there’s been talk of a national-record attempt.  But the 1:26.09 that Long Beach Poly ran in 2005 is a tough, tough standard.  Meanwhile, Noah will attempt to defend his 200 crown, while Josephus would like his first indoor title at twice the distance.  Both will contest the 60, hoping for a 1-2.  None of those tasks will be easy, however, with studs like Keshun Reed, William Allen, Maxwell Willis and Cravont Charleston among many contenders.  How many relay and individual golds will the Lyles wind up with?

That the girls of Rush-Henrietta, NY were pretty darn good and contenders for at last one relay title at last winter’s NBNI was quite clear, but no one really expected the blistering national record 3:52.68 sprint medley that Lanae-Tava Thomas, Tori Thompson, Ceara Watson and Sammy Watson produced.  Even more jaw-dropping is what they did in an utter downpour at NBNO in June, when the younger Watson came from behind and hammered her 800 anchor like velociraptors were chasing her – crossing the line with she and her mates drenched to the core and holders of an unimaginable new standard of 3:47.65.

The 2:03.08 that Watson ran remains her best-ever mark – even among the countless individual triumphs she’s produced in much better conditions.  Now, in 2016, three of the four relay members are back.  The very tough older Watson sister, Ceara, has graduated.  But younger sis Sammy now has a World Youth 800 title to her name and Thomas has progressed to the point where she’s #1 in the country in the 55, is under 24 in the 200 and has long-jumped over 20 feet.  Thompson is older and better, the only senior, and Stepanie Nwachi is now the 4th member.  This winter they have led the nation with their 4:00.84 since early January.  Now in mid-March, can they push that time down to their 2015 standard or better?

You’d think they were triplets, the way DJ Principe, Jr., Matt Bouthillette and Jack Salisbury compete – and compete at the highest of levels.  Consider the results: In one early-season meet, they ran 4:06.5, 4:06.6 and 4:06.6 for 1,500m.  No big deal, but in a faster, more competitive mile at the Dartmouth Relays, it was Salisbury 4:15.33, Principe 4:16.06, Bouthillette 4:16.75.  It’s like this, or very close, all … the … time.  Sometimes, they don’t all run the same event, but rarely does a school have three talents so similar, so in sync, yet unique stars for this distance powerhouse, as well.

Of course, the 4x1 Mile relay is a natural for these guys and last winter, with Bouthillette and Salisbury juniors, Principe a soph and Daniel Paiva in the other spot as a senior, the guys combined for a 17:11.07 – just enough to beat Davis, UT for the NBNI title.  That would have been a national record not long ago, but they fell just short of the 17:07.17 CBA, NJ clocked in 2014.  This year, with the three returnees all improved and Alessandro Campagna has been added to the mix, they have a shot at that national record.  Campagna, with a 4:14 PR at 1,500, probably has to run around 4:30, and the other three averaging 4:11 or so.  It’s the last go-round for the seniors, so you can bet they’ll be motivated.

Ever since she was a middle schooler, Anna Jefferson has been a key for the MCTC/Oak Park relays and overall fortunes.  For most of her high school career, she’s been the anchor and most powerful force and, now as a senior, she’s continued to grow into the leadership role that motivates and inspires her teammates.  It’s hard – truly hard – to imagine Coach Brandon Jiles troops without her, but that’s exactly where they’ll be after she moves on to University of Virginia.  MCTC and Jefferson can work it for almost any relay that involves speed, but the 4x400 has typically been their sweet spot.  They are 2-time defending champs here, after last year’s near-record 3:42.72, and also won the NBNO 4x4 in 2014.

Anna has run as fast as 53.50 and is starting to come into that type of form now.  Dorriann Coleman was the rising superstar last year and is coming back into form after early season injury issues.  Brianna Holloway provides senior strength, speed and leadership and Janae Barksdale is the youngster of the 4x4 group as a freshman.  MCTC will have their hands full in the 4x4 with 2015 NBNO outdoor champ Union Catholic, as well as Bullis from Maryland and possibly others.  But if the team shows the kind of grit they did when Anna finished off a come-from-behind 4x4 triumph at Kentucky last month, in 3:45.00, they will be tough to beat.

Everyone knows the incredible kind of year that Loudon County, VA sr Andrew Hunter has had in 2015-16, especially the past few months as he has authored mind-boggling national records in the 3,000m (7:59.33) and mile (twice, 3:58.25 and 3:57.81).  The running media has bestowed the G.O.A.T. designation on him and it’s hard to imagine how any prep distance runner could have a better winter.  Hunter is also, of course, the 2015 NBNI 2-mile champ, having been victorious in another true epic of a race as he outkicked Alex Ostberg and Levi Thomet.  So what does he have left to accomplish in individual races at NBNI or this year at all?

Not a lot, Hunter decided, apparently.  So why not give his teammates a chance to compete at this level, too?  Loudon County doesn’t traditionally have an indoor track season, but they have a good distance program.  Behind Hunter in last November’s Virginia 4A state XC meet were sophomores Colton Bogucki in 5th, Peter Morris in 6th and Drew’s freshman brother Jacob in 16th.  Bogucki will join the senior Hunter in Friday’s DMR, along with seniors Willem Smagh and Nathaniel Thompson.  Then in Saturday’s 4x1 Mile relay, it’ll be Bogucki, Smagh and Morris with Hunter.  The squads definitely have eyes on podium finishes, with the DMR figuring to have a solid shot to win and the 4x1 quartet looking at an All-American finish, as well.

Right away this winter, the girls of Paul Robeson HS set the tone for who would be the top 4x200 squad in New York, the region and, indeed, the nation.  The 4x2 – four athletes ripping a lap around a standard oval – is one of the most thrilling relays in the sport, often fraught with drama during crowded exchanges (especially on banked tracks).  They hit 1:39.56 the 2nd weekend of December – extremely early for a sub-1:40 – and improved it to 1:38.82 in late December, then won Marine Corps with near as fast a time, then finally blew it under 1:38 at 1:37.80 during the Hispanic Games – each step of the way setting impressive standards for early season excellence in this event.

They’ve since continued to crank out the fast times during an unbeaten winter, as well as clocking an excellent 3:48.50 for 4x400.  But no event is more in their wheelhouse than the 4x2.  Last winter they missed the 4x2 final here, then got 4th in the 4x4.  Their NBNO relay results, similarly, weren’t quite what they wanted.  This winter, though – so far – has been just about perfect for Alyssa Sandy, Amanda Crawford, Charnice Anderson and Latoya Stewart.  Will that hold up this weekend and give these girls a long-awaited title?

When folks saw Chantilly, Virginia’s Brandon’s McGorty run 1:51.50 out of the penultimate section of the NBNI championship 800 last year – as a sophomore – a lot of them had to wonder, dear God, is it possible that another McGorty is this talented?  Just two years earlier, distance fans had finished watching Brandon’s older brother Sean close out his career at Chantilly with a NBNO 2-mile title in a sterling 8:45.61 – completing four years of great XC and track performances.  We’re also talking 2nd at Foot Locker, Penn Relays mile champ and on and on for Sean.  Could Brandon be even better, fans wondered?

It’s been three years since we’ve seen a girls’ sub-9:00 4x800 at NBNI, a time that used to be fairly common.  It’s not that the talent hasn’t been out there, it just hasn’t coalesced at the right time, the right place, the right race.  That could change this weekend, and from a relatively new and surprising powerhouse.  Regular-season indoor sub-9:00s are fairly uncommon, in any year, but the girls of Mamaroneck, NY nearly achieved that at the Armory Track Invite in February, rocking an eye-opening 9:01.81 in a very competitive race.  They had taken 4th at the 2015 NBNI 4x8, with a 9:07.93 – and all four had returned this season – so the results can’t be said to be entirely unexpected.

So, meet seniors Katie DeVore, Shari Rauls and Lauren Chapey.  They are the heart and core of this group, having paid their dues and kept improving to this point.  They are joined by sophomore Lauren Shpiz, who is reliable and can get under 2:20 as well.  DeVore has run 2:13 for 800 and 2:52 for 1,000m.  Rauls is more speed oriented, with a 1:34.43 600m on her resume.  Chapey is fastest on the team in the 1,500, just ahead of DeVore at 4:38.60 this year.  The truth is that something special happens when all four run together with a baton.  Could that something special this weekend be a sub-9:00?