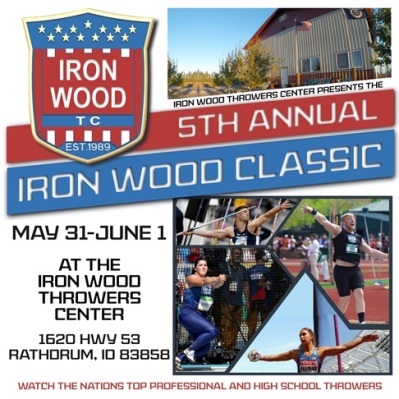 Four U.S.-leaders and 10 other national top-10 performers highlight the outstanding fields of preps competing this coming weekend (May 31-June 1) in the 2019 Ironwood Throws Classic.

The elite NSAF throws event is in its 4th year at Ironwood and provides an opportunity for top high school athletes to compete alongside and be mentored by some of the USA’s top elite throwers – including Olympians, aspiring Olympians and other pros and post-collegians. The history of the event goes back to 2013, when the NSAF partnered with what was then the Chicagoland Throwers Series.

The boys’ shot put field includes not only Viveros, but the year’s only other 70-footer – Tanner Duffin. Joining Hoekstre in the girls’ shot is Faith Bender, the country’s #2 sophomore and Viveros’ teammate at Bakerfield, CA’s Liberty HS. Bender is also throwing the discus, where she is US#3 and the top 10th-grader. She is accompanied in that event by Shelby Frank from North Dakota, right behind her on the national list.

Duffin is also doubling up, part of a boy’s discus field that features the nation’s #2-3-4 throwers in Jacob Lemmon, Duffin and Jordan Johnson. Also invited was national leader Devin Roberson, who had to decline due to post-tornado cleanup in his hometown of Jefferson City, MO. Finally, the hammer is not part of the prep (or men’s elite) slate at Ironwood this year, due to scheduling conflicts with top competitors, but there will be a women’s competition and some of the preps may join in.

Here are brief profiles of each of the Team NSAF throwers: