Bombs away, Nike Outdoor Nationals fans, as one of the greatest-ever gatherings of scholastic shot put talent descends on the Irwin Belk track and field area at Aggie Stadium to have it out for 2009 USA supremacy.

To the musclemen who'll enter the ring Saturday afternoon, June 20, and their entourages of coaches, parents, teammates and admirers, nothing would be finer down in Carolina than to see mass destruction of the all-time NON ranking lists.

You can count on it happening.

The four top entrants have already bombed their 12-pound iron missiles well past the listed NON meet record of 69 feet, 8 1/4 inches notched by Bayonne, New Jersey's Kevin DiGiorgio in 1997. They've been doing it all year long, but almost always in their separate realms, so now that they're at last gathering at the same venue it promises to become an event for the ages.

And turn shot putting into the spectator sport that figures to lure huge heaps of attention away from the goings-on on the Belk track.

"I'm just going to step into the ring, clear my head, focus on what I've been doing all year long, and let it go," declares Nick Vena, the sizzling sophomore from Morristown, New Jersey, who tops the 2009 national leader-board with his mighty 72-8 heave at the New Jersey State Meet of Champions, June 4th.

"Oh yeah, I can't wait to meet up with those other guys in Greensboro. It's going to be crazy," says Stephen Saenz of Rio Grande City, Texas, the number two man on the year list, with his power-packed 72-6 1/4 launch, at his Regional State Meet May 15, which held the U.S. lead until Vena got one out an inch and three quarters further 19 days later.

"I love the whole atmopshere of big meets; it brings up the whole level of competition for everybody involved, I'm pretty pumped already," said Hayden Baillio of Whitesboro, Texas, who howitzered it out 72-2 1/4 at the Texas Relays April 4 for the nation's number three top mark.

" All I want is to do my best, I'm not really thinking about the other guys I'm throwing against right now, I'll let my best speak for itself," offered Mason Finley of Buena Vista, Colorado, who punched out a 71-3 1/4 at the Littleton meet on April 21.

And it's not just the shots that will be flying prodigous distances.

Finley is the new national record-holder in the discus after spinning his favorite platter out to a national record of 236-6 on April 25. Baillio and Saenz will join him in the disc circle on Friday, June 19th. Vena happens to be the New Jersey state discus champion as well but will focus entirely on the shot at Greensboro.

If there's a bank-able certainty heading into the NON, it's that DiGiorgio's meet-record 69-8 3/4 will be in shreds by the time the dust clears on June 20. Ah, but who'll be the top-shredder, that's the huge question ??

Will it be Vena, the sophomore lefty who placed second in this meet a year ago, heaving a freshman-record 67-2 1/4 back of Indianapolis senior Brandon Pounds's gold-medal 68-11 1/4 throw?

Anyone who saw him compete at the New Jersey Meet of Champions, held at South Plainfield, might have placed him in a league of his own.

"It was nice setting my PR in my last meet in my home state. But I know what those other guys from around the country have been doing and I better be at my best."

A big assemblage crowded into the shot put area at South Plainfield. Their loud rounds of applause, after each of Vena's launches, echoed across to the other fans settled into the grandstands.

"I know there were a lot of people there, but I couldn't even think about that," he said. He "zoned" them out and let it fly, the way this event's great champions have always done it. 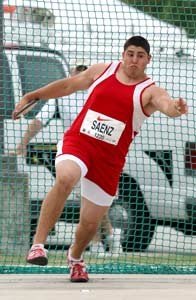 Saenz, whose hometown is located on the USA-Mexico border, about an hour's drive southeast of Laredo, had his own "perfect day" at his Regional meet.

"Everything was just about right, everything worked out," he said. "We had a little rain delay and that just helped me get so more pumped. And we had a pretty good crowd, too. I just fed off all that energy. It was pretty cool."

But, apart from the Texas Relays, Saenz and Baillio rarely meet on their Texas home turf since their schools are in different groups and the Lone Star State doesn't stage an all-group meet. 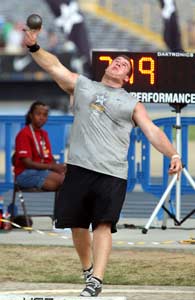 Baillio's North Texas hometown of Whitesboro is some 60 miles from Dallas. His Texas Relays triumph served as a major confidence-builder.

"Oh, I was very, very excited that day," he said. " It really got me going. And it showed that I've got a lot more in me. You know, when my energy level gets so high in Greensboro, I know I can do much, much better."

Superb as he is in the shot, the iron ball may be something of an afterthought to Finley. After all, the 6-foot-8 330-pounder is the longest scholastic discus thrower the nation has ever seen.

The 236-6 (set at the Mile High Meet in Alamosa) erased the national record of 234-3 that Niklas Arrhenius of Mountain View High, Orem, Utah, had held since 2001.

"Oh, I knew it was going far that day, but not really 236-6," he said. "Wow, everything just worked out for me that day. I was shocked when they read the distance, but I still tried to stay pretty calm."

One more NON message: it figures to be a doubly difficult weekend for the DiGiorgios of Bayonne, NJ. One day before Kevin DiGiorgio's NON shot record of 69-8 1/4 goes under siege, his kid brother Glenn's NON discus mark of 213-4, set in 2002, faces a brief life expectancy of its own once Finley steps into=2 0the disc circle.

While Vena has two more years to mull his college destination, Saenz (bound for Auburn), Baillio (U. Of Texas at Austin) and Finley (UCLA) have already made their decisions. Saenz plans to major in kinesiology en route to a career in physical therapy. Finley will be a chemistry major. Baillio says "I'm just not sure yet."

With this unprecedented talent level, listed NON records in both shot and discus seem a lock for erasure.

And that would leave just one more "big one" subject to attack. Of course, that's Michael Carter's still-astounding national shot put record of 81-3 1/2 that has been virtually unchallenged since 1979.

With two years to go, will Vena eventually get there?

His response to the question so many keep asking: "That (81-3 1/2) is really one far, far mark. I never, ever want to put pressure on myself. If it happens, it happens. What more can you say? "