A new scholarship is available for girls who qualify for New Balance Nationals Outdoor this year, thanks to the Natasha Hastings Foundation (https://www.nhfcares.org) – created by the all-time great sprinter from New York who has won more than a dozen Olympic and World Championship medals. 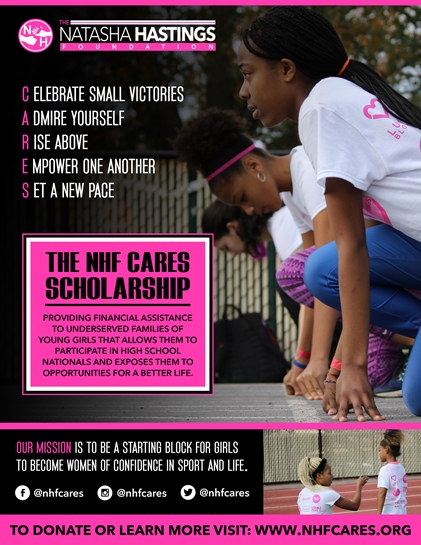 Any young woman who qualifies for New Balance Nationals Outdoor (June 13-16, 2019) in their individual event(s) and fulfills the meet’s entry requirements (including having a current USATF membership), is eligible to win The Natasha Hastings Foundation Scholarship.

Those applying for the scholarship will submit the following:

All essays and letters of recommendations should be sent (in one email) to: scholarships@nhfcares.org. The deadline for submission is May 31, 2019.

Natasha’s inspiration to offer the scholarship through her foundation is the importance of the sport throughout her life and memories of the financial sacrifices made to attend meets around the country that were instrumental toward her early successes. As she says on her foundation’s web site:

Track and field has played a huge part in my life for many reasons. It’s been character building, it earned me a scholarship to a major university where I earned my degree, I’ve traveled the world, and most importantly I’ve made lasting friendships over the years in the sport. If it weren’t for track, I’m not sure what my life would be.

Coming from a divorced family, I watched my mother make countless sacrifices to make sure my brother and I had everything we needed. While sport is something we hope all children are exposed to for many reasons, it can be very costly. I remember selling candy in school to help ease the financial burden for all of my trips across the country to compete. There was gas, flights, rental cars, food, and entry fees. For this reason I want to help families by providing scholarships for girls who have qualified to attend high school nationals.

It has become my passion to help young girls to see the world and be exposed to the opportunities that I was blessed with, and led to my success in my career. Having watched my mother make countless sacrifices to see her daughter happy, I hope to help some families do the same for their daughters.

Natasha Hastings launched the foundation with the stated mission to “Be a starting block for girls to become women of confidence in sport and life” and with the stated vision that there will come to be “Generations of girls brought up with the confidence to accomplish their deepest desires, who become self-loving women, reaching their full potential and inspiring others.”

The foundation’s utilizes “Cares” as an acronym to create 5 stated values:

Natasha’s athletics success began at the USATF when she was a youth and blossomed quickly as she began high school competition at A.Phillip Randolph HS in New York. She set an indoor national freshman class record in the 200 during her first prep season.

She made her first U.S. team in 2003 after her 11th-grade campaign, selected for the IAAF World Youth Champs in Sherbrooke, Canada, where she won individual 400 and medley relay gold. A year later, she duplicated her 400/relay gold medal double at the World Juniors in Grosseto, Italy – with the 4x400 won in a World Junior record time of 3:27.60 that hasn’t been surpassed 14 years later.

Meanwhile, Natasha completed her stellar prep career at the NSAF’s 2004 outdoor championships with a victory in the 400m, and runner-up finishes in the 200 and with her team in the 4x400 and sprint medley relays.

As a member of the Gamecock Track Divas at U. of South Carolina, she continued to excel – winning the 2007 NCAA indoor and outdoor 400s her junior season before turning pro. That summer she was USATF outdoor 400 runner-up in a career-best 49.84 and won her first international 4x400 gold as a senior athlete during the IAAF World Champs in Osaka. She would go on to win 4x400 gold or silver in the next five IAAF championships through 2017.

Natasha earned Olympic gold for the first time in the 2008 Beijing 4x400, then duplicated the feat in Rio with her second 4x4 gold in 2016 – a meet during which she would also take fourth in the individual 400. Her resume also includes three World Indoor golds (plus silver and bronze) between 2010-16 and three World Relay golds.