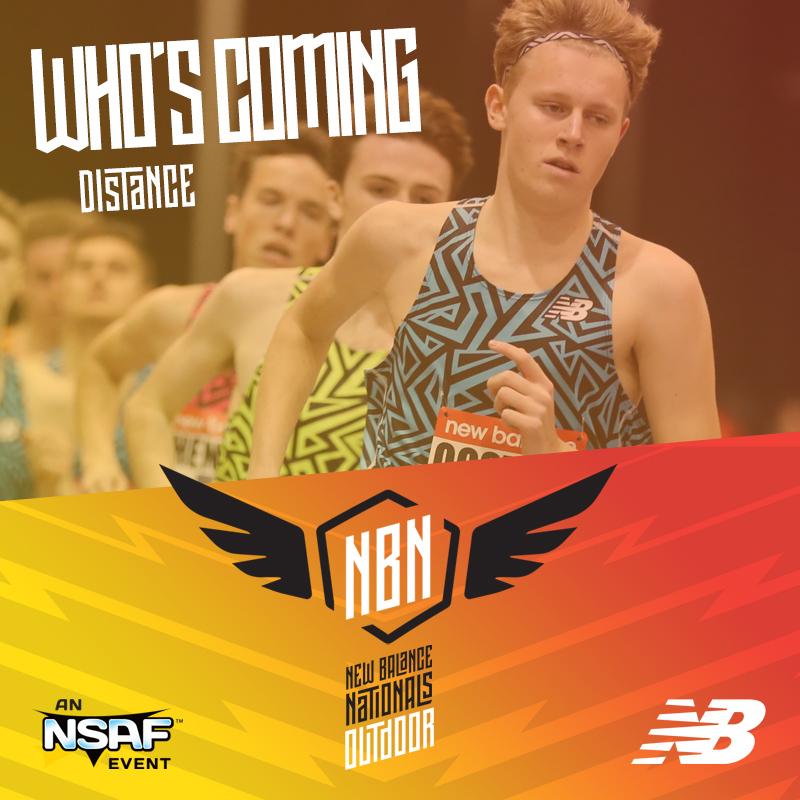 Ryan Oosting – Coming Back For More

You don't expect a sophomore to win a race as challenging as the New Balance Nationals Outdoor 5,000 meters. First, the race is about a mile longer than most high school ever run on a track. And it's usually won by someone who displays ready-for-college poise and maturity. But Ryan Oosting of Arlington MA won it as a sophomore last year, running down NBNI 5k champ Ben Varghese with an incredible last lap, and he's coming back for more.

The sophomore from North Rockland is operating in a stratosphere like few other female teen distance runners before her. In the months following her stunning victory at Nike Cross Nationals, Katelyn Tuohy was churning out national records on the indoor oval and has shown no signs of slowing down. Last week at the New York state championships, Tuohy broke Mary Cain's state meet record in the 1,500 meters with 4:14.45. That came one day after running 9:09.71 in the 3,000 meters -- making her the fourth-fastest high schooler of all time. Earlier this spring, she broke the national record in the 3,200 meters when she ran 9:47.88 at the Loucks Games.

Tuohy has chosen to defend her title in the mile at NBNO, which means she has probably discovered that on Page 50 of Jack Shepherd's High School Track annual that the national record is 4:34.89 and it belongs to Alexa Efraimson (2014, converted from 1,600m). Tuohy owns a mile best of 4:43.62 and will likely be aiming to run well below that time this weekend. The sophomore class record of 4:39.28 is currently held by Cain. Reaching the halfway mark of her prep career, she already owns two individual NBN titles (also ’18 NBNI 2-mile) and four more anchoring distance medley relays.

Devin Hart – One of a Kind Double

It is surely safe to say that no one in prep distance running has ever pulled off the stunt that junior Devin Hart of Point Pleasant Boro NJ made happen last weekend. Hart went to Seattle for the Brooks PR Invitational and competed in the 2-mile Friday evening in a drizzle, taking fourth in 8:53.36. He left the meet and went to the airport, boarded an overnight flight to New Jersey and landed on Saturday morning. He went home for a nap and later that day won the NJSIAA Meet of Champions 3,200 meters in 8:58.58 to complete an extraordinary two-day, two-coast double.

This weekend in Greensboro, Hart – also this year’s Penn Relays 3k champ – is looking to double again. This time he is entered in the 2-mile as well as the 5,000 meters. But the only traveling he has to do is back and forth to his hotel. Hart was 6th in the 2M in this past winter’s NBNI and 7th in the NBNO 5,000 in ’17. He’s quickly becoming one of the best runners in the class of 2019 and is a threat to win either of this weekend's championship races.

Olivia Theis – The Pursuit of Sub-10

Before she heads to the University of Michigan, there are a couple of boxes that Olivia Theis of Lansing Catholic MI – the 2017 NBNO 2-mile runner-up – would surely love to check. Back on May 4 at the super competitive Shepherd Blue Jay Invite, Theis ran 10:03.95 for 3,200 meters for a personal best that held up the remainder of the season. However, the Michigan all-time state best in the 2-mile is 10:01.16 by Megan Goethals of Rochester (2010) and the 3,200 meters conversion is 9:58.1.

Theis ran to a Michigan Lower Peninsula Division 2 title in the 3,200 meters in 10:37.08 and finished second to Kayla Windemuller in the 1,600 meters. This weekend in Greensboro, Theis has a chance to chase the Michigan state record in the 2-mile – while shooting to finish one place higher than last year – and also share the track one last time with her younger sister Jaden, a sophomore. Olivia and Jaden are both entered in the 2-mile and will also run together with two teammates in the 4xMile Relay.

Less than a week after running a PR time of 4:16.62 in the mile at the Arcadia Invitational, Luis Peralta was on a plane to his family's native Dominican Republic to compete in the island nation's national championships. Peralta, a high school junior from Passaic NJ, won the 800 meter title in 1:50.62. That qualified him to compete at the Central American and Caribbean Games at Barranquilla, Colombia, July 19-25.

Last week at the New Jersey Meet of Champions, Peralta ran a sensational US#3 time of 1:49.63 to win the state title and meet a qualifying standard for the IAAF World U20 Championships in Tampere, Finland, July 10-15. Before those summer adventures begin, Peralta has business to attend to in Greensboro. He is entered in the 800 meters, where he will get a chance to race Ian Delgado of Green Hope NC, one of the prep four runners in the U.S. this spring to run sub-1:50.

The twins from Oak Ridge High were sensational at California's CIF finals. Elena won the 3,200 meters title with twin sister Maddy just one second behind her as the pair went 1-2 in 10:10.32 and 10:11.56. In the 1,600 meters, Maddy was the victor in 4:42.77 and Elena took fourth in 4:45.49. Together, the wins scored 33 points and Oak Ridge finished in the team standings, just three points behind champion Serra.

After coming to their first New Balance Nationals Outdoor this week, the twins are splitting up. Elena is headed to Notre Dame. Maddy is off to Michigan. So this weekend in Greensboro is special for the sisters because it marks the last time, for the foreseeable future, that they will be teammates. The Denners are both entered in the 2-Mile and Mile, and have a great shot to make it high atop the medal stand in each. Only two Californians have ever won titles in these events, the last being Anita Siraki in the 2M in 2001.

If the North Carolina state meet has been the final statement in the prep career of Cameron Ponder it would have been a shame. The Mount Tabor senior was in line to win not just one but possibly multiple titles at the state championships but became ill that weekend and was unable to compete. He had already claimed NCHSAA 3A titles both in XC and indoors – 1k and 1600 – in 2017-18.

Thankfully, Ponder found a race where he could really show what he can do. At the Music City Distance Carnival in Nashville two weekends ago, Ponder won the boys mile in a US#1 time of 4:04.24 -- making him the second-fastest miler in state history behind Craig Engels. Two months ago, he was in position to win the mile at Penn Relays, but was overtaken late and settled for second in 4:10.98.  Despite growing up in North Carolina, this will be Ponder's first appearance at New Balance Nationals and he is entered in the mile and the 2-mile.

It's not often that the New York state champion in the girls 2,000-meter steeplechase hails from New York City's Public Schools Athletic League. But Aziza Chigatayeva, a senior at Brooklyn Tech, has been chipping away at the event for the past four years and her hard work paid off with a 10-second PR and 6:43.04 victory at the NYSPHSAA state meet last weekend. She had been sixth in the event in 2017.

Chigatayeva, of the Brooklyn Tech Engineers, placed fifth just a month ago in the Loucks Games 2,000-meter steeplechase. That day (May 12), freshman Brooke Rauber of Tully won it with 6:51.03. But despite running more than five seconds faster at state, Rauber was two seconds behind Chigatayeva. Now all eyes will be on Chigatayeva at New Balance Nationals, where she was fifth at year ago (6:53.81).