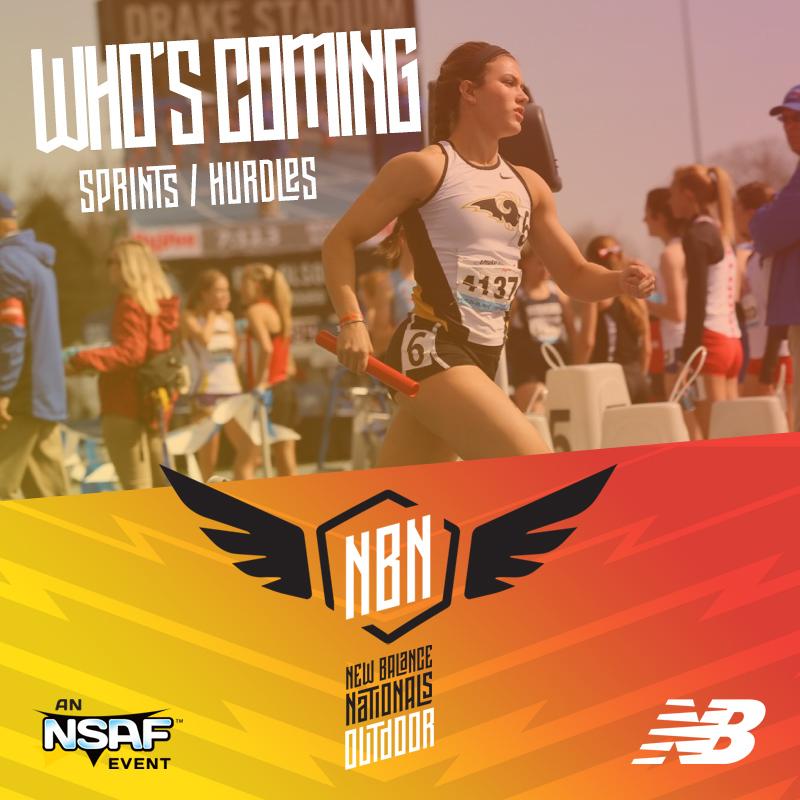 The development of outstanding prep girls who are national class at 400 and 800 meters – and can also compete at least at a state level in both shorter sprints and longer distances – is not unheard-of, but still very rare and special. Sydney Milani, a Southeast Polk, IA senior, put herself in position to become one of those quadruple-threat legends for her 4A Iowa state meet last month and shook the track and field world with her accomplishments. She swept the 100m (11.49w), 200m (23.68w), 400m (52.90) and 800m (2:10.38). All of those times put her in, or very close to, the national top 10 for 2018.

Milani’s broad talent started to become evident last year, when she was 2nd in both the 200 and 400 at state, and ran solid 100 and 800 times. Her respectable XC times and endurance as a soccer player suggested she could lower the 800 time – which she did early this spring with breakthroughs at 2:14, then 2:11.38 to win the Drake Relays. Intense commitment in the weight room brought down the 100 and 200 marks. Here at NBNO, the Iowa State-bound Milani is slated in the 100, 200 and 400 (her best chance to win), though she might pare it down to two events.

During the past several weeks, it was hard to imagine that Tyrese Cooper (Miami Norland, FL junior) might be able to defend his 200 and 400 titles here in Greensboro this weekend. After an injury ended his indoor season at NBNI, he had some struggles that resulted in highly-publicized arrests during the spring that forced him out of the Florida state meet. But Cooper was not proven to commit actual crimes in the events and was cleared of charges. Having also considered competing in USA Juniors, he chose to return to NBNO instead.

Cooper has already had an incredible NBN resume through the end of his soph year in ’17. He swept the 400 and 200 at both the indoor and outdoor nationals, something never done before and extra impressive due to the tight scheduling of that double. On top of the groundbreaking seasons he had in 8th and 9th grades, he seemed destined for all-time prep sprint greatness. Now, while he isn’t the favorite at this point in either sprint, the Cooper Express is getting back on track.

Track fans in Florida and around the nation took notice in 2017 and the years immediately prior as Tamari Davis developed into the latest, and perhaps greatest of the young girls’ sprint phenoms – including a 23.21 200m last spring as an 8th-grader to win the Prefontaine Class prep event with the nation’s #3 time. So the NSAF was thrilled when the Gainesville HS freshman entered the Dunamis Super Meet this winter and started her stellar freshman season with victorious 9th-grade national records of 7.30 in the 60m and 23.42 in the 200.

In her first NBNI weeks later, Davis dashed to 7.25 and 23.46 (23.24 prelim) triumphs to reset her records and climb the all-time lists. Those indoor performances came as the Florida outdoor season was unfolding, which built to the climax of Davis-Briana Williams showdowns in the 3A state meet in early May. There, Davis was beaten in the 100, but came back for an epic freshman record 22.48 in the 200 – #3 all-time among preps. Then last week with a PR 11.13 in the Star Athletics 100m vs. pros, she set another 9th-grade mark and elevated to #4 all-time. Davis is not yet old enough to represent Team USA in the World U20 meet, so she’ll look to add to her NBN resume and chase records in the dashes here.

It’s always exciting to watch how late-season breakthroughs can lead prep athletes to pursue bigger and better things – which they may not have though previously possible. Miramar HS (FL) junior Taylor Banks has been gradually building his sprint resume for years, running 10.96 and 10.79 in 8th and 9th grades in ’15 and ’16. As a soph last year, he improved to 10.50 and 10.34w, but was still in the shadow of great Florida sprinters like Cooper and Anthony Schwartz – even with a season-capping win in the AAU Club Champs (10.56).

Though still not quite on everyone’s national radar, irrepressible Buford HS (GA) soph Kimberly Harris has been climbing the ranks in the sprints and long jumps, and finds herself on the cusp of her first NBN championship title this weekend. As a frosh last year, Harris had an impressive PR 23.86 Emerging Elite 200 victory, into a 2.5 headwind, then a close 5th place finish in the championship 400 – her 53.51 just .15 out of 3rd. Then she served notice indoors she was going to be tough again this year with a 54.82 victory at Dunamis.

That led to NBNI, where Harris took 3rd in the 400 (53.77) and the same in the EE 60 dash. This spring, she kept improving into the 52s in the 1-lapper, defending her state title, adding a stunning PR long jump victory at 20-2.5, and driving Buford’s great relay crews. Then in the Atlanta Georgia Relays post-season meet, she lowered her 400 best to a US#2 52.33. Now, as the top entry in the event, Harris has a great chance to top the championship podium.

Much like Cory Poole did in 2017, stellar hurdler Kurt Powdar (Oscar Smith, VA junior) went from the highest of highs to the lowest of lows at NBNI this past March. On Saturday, he helped his school (Team 7-5-7 here) to a stunning victory in the shuttle hurdle relay, beating defending champ East Orange (Poole’s alma mater). Then in Sunday’s 60m hurdles, the unbeaten Powdar blasted a eye-opening PR 7.64 in the prelims – leading qualifiers and crushing his 55H PR (7.08 at his normal race distance in VA) en route.

But then, in one of the most heartbreaking false-starts of the meet, Powdar was DQ’d in the final while Ayden Owens ran to a 7.59 victory. So this spring – with a 13.95 PR from ’17 (but only 14.48 at NBNO prelims) – set about putting that memory behind him. He’s been unbeaten in the 110s, lowering his best to a 13.73 (-0.6w) to claim his 6A state title. That gives Powdar the top wind-legal performance coming into NBNO and a chance to get the championship denied him in the winter.

Throughout the past three years, Reanda Richards (Essex HS, NJ senior) has built a successful, growing resume in New Jersey and national competition – both Emerging Elite and Championship – at distances ranging from 55m hurdles (8.17 PR) to the 800m (2:14.52). Not surprisingly, she’s found her sweet spot is the 400m hurdles, that event that combines speed, hurdling ability and endurance in a grueling combination. As a soph in 2016, she was 6th at the NJ Meet of Champs, then 14th at NBNO and had a season’s best of 1:00.83.

As a junior, Richards won her Group state title, was 2nd at MOC with a season’s best 59.09, then took 5th at NBNO to earn All-American status. Now as a senior, she was unbeaten through her Jersey season with both state titles and a US#3 58.95 best. Her only non-winning 400H was a fine 3rd place finish at the Penn Relays. Richards is the top 400H entry and, with her new 13.77 100H PR (2nd MOC), has a shot at podium status there, too.

No one who watched it will ever forget: Akeem Lindo of East Orange HS and Tommy Burns of Miami Northwestern, racing, straining, lunging and finally diving into the finish of the boys’ 4x400 relay – the climactic event of 2017 NBNO. It was an incredible way to finish the meet – and touched off a great East Orange celebration when it was announced they had won, 3:11.69 to 3:11.71. Lindo was a junior on a great team featuring senior star Cory Poole, who was the 400H runner-up. The duo also teamed up for the shuttle hurdles title, which they also won indoors.

Now Poole is gone, starring at U. of Florida, and Lindo is a senior leader. His specialty is also the 400H, where he has been chipping his time down from a 53.05 PR last year down to 52.28 – his winning mark at the NJ Meet of Champs. He was also the 110H champ at MOC, with 13.71, and has fine marks in multiple events. He’ll be a top contender here in his specialty and again lead the EO relays – including the shuttles, but not the 4x400 this time around. And, if that weren’t enough, Lindo will be running on the same track he’ll be training and competing on in college – he’s an North Carolina A&T signee!.