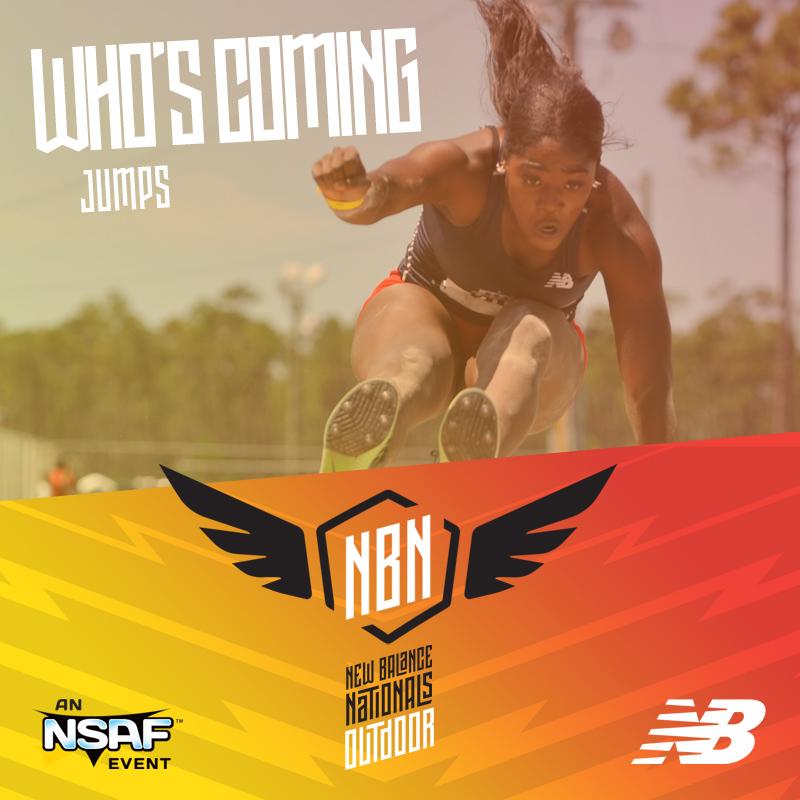 She never would have imagined it would happen this way, but Tosin Alao’s triple jump competition in Team NSAF’s Bahamas meet last week basically came down to a 1-on-1 dual against teammate Titiana Marsh – the 4-time NBN All-American and Project TJ’er. The unusual situation could have made the Allen, TX junior feel undue pressure, but she embraced it – jumping hard and well, while she and Marsh supported each other, too. Alao leapt 41-8, one of her career-best performances, in taking 2nd to Marsh’s 41-10.5. She was also a close 2nd to the Virginian with her PR 19-4.75 long jump.

Alao was chosen for Team NSAF earlier this spring as a rising star in the event. She had been a 40-5 jumper in ’16, eventually taking 6th at 6A state. But as a soph and 41-footer last year, she was off form at her region meet and missed getting back to Austin. This spring she was 2nd at the Texas Relays, then had a big 42-3.25 PR to win district. Strong 41-high performances to win region and finish a very narrow runner-up at state (by a quarter inch) followed. Now Alao and Marsh will again be the girls to beat at NBNO – the competition will be much more vast, but in the end, it could be those two battling for the top.

Malcolm Clemons joined the NSAF’s Project Triple jump this past fall, officially joining the group at its IMG Academy clinic in October after injury prevented an earlier debut. Clemons was coming off an outstanding freshman season for St. Mary’s Academy out of Berkeley, CA, having bounded a then-PR 46-8.75 TJ to take 5th at his state meet while also taking 7th in the long jump (23-1 season’s best in prelims). He was the nation’s top 9th-grader.

In 2018, while improvement in the TJ has proven somewhat elusive until recently, Clemons has had an amazing season in the LJ – winning 13 of 16 finals. With a 24-5.25 victory at Stanford in late March, he took the national lead and has held it nearly the entire season. His North Coast Trials in mid-May began a streak of three straight wins at 24-3 or better, including a grand 25-1w all-conditions PR to take state (also 24-11.75 wind-legal in series). TJ success has been more elusive, but Clemons finally came close to his PR at the North Coast MOC (46-8.5), then he jumped 47-7.5 in the state prelims (he passed on the final). With that state meet victory, he’ll be the favorite in the LJ and could become the first soph to win the event here.

Maya Evans was a youth phenom in the long jump as far back as 7th-grade, when she leapt nearly 18 and half feet. By her freshman year at Lutheran HS (Denver, CO), she was getting into the 19s indoors and really announced her arrival as a top national elite with her 20-8.5w victory at Great Southwest (also 20-4.25 legal). She didn’t make it to NBNO that spring, but as a sophomore in 2016 she took 2nd in Greensboro at 20-3.5, Meanwhile, while she was becoming consistent in the high 19s and low 20s, improving her PRs was tough – it always is when you’re that good, that young.

A published story three weeks ago on Delsea, NJ senior jumps standout Khaliel Burnett reported that he’s headed to Monroe Junior College to study and compete next year. With the performances he’s had in three meets since, plus the progress he’s making as an all-around student-athlete, it’s easy to imagine great success for him at the NCAA D1 level in the future. At his NJ Group 3 Sectional meet on May 26, Burnett hit his first career 50-footer in the triple jump, winning at 50-4. Then a week later at Group 3 state, he exploded to 50-9.25 – the #3 all-conditions TJ of the season, nationally.

This past weekend, while he only got into the 48s, Burnett defended his NJ Meet of Champs title. When he lines up for the NBNO TJ this weekend, only Chris Welch – a Texan with a wind-aided 51-4 – will have jumped further in 2018. Burnett should have extra motivation after what happened this past indoor season. He won the Eastern States in February with a big indoor best of 49-1, but then at NBNI, he barely managed 46 and finished 15th. With confidence from his recent outdoor performances, a much better finish should be in the making.

Maine may not be regarded as a hotbed of national class prep track and field. But athletes like Kate Hall (Lake Region HS, ’15) has proven athletes from the state can not only compete at that level, but win championships, set records (22-5 long jump at ’15 NBNO) and excel as collegians. Nyagoa Bayak (Westbrook HS, ’18) is a pretty good horizontal jumper, too – though more the triple than the long – but it’s the high jump where she really excels. She started making an impression in that event as a soph in ’16, jumping 5-7 and winning indoor state and New Englands.

Bayak’s progress stalled a bit after that and while she kept doing well in Maine, she was stuck in the 5-6 to 5-8 range through her junior year. But things have changed for the senior, also a basketball and soccer player, in ’18. She broke through to 5-9 to win the Dartmouth Relays, 5-10 to capture New Englands, then she was 3rd at NBNI with 5-8.75.  Outdoors she’s hit 5-10 or better four times, including 5-11 clearances in her past two meets: Class A state and New Englands. Bayak, who also won the EE triple jump at NBNI with a PR 39-1.75, will have defending champ Jenna Rogers and 6-footer Shelby Tyler to battle at NBNO for the HJ crown.

It was a bit of a viral moment when Mayson Conner cleared 7-1.75 in the NBNI high jump this past March, leaping off the mat in celebration after doing so. Not a whole lot of athletes from Nebraska venture to The Armory to compete on the big stage and Conner got a lot of social media love for repping the Cornhusker State in his victory – winning a great event where three athletes cleared seven feet and four more scaled 6-10.75. A York HS senior and U. of Nebraska signee, Conner had a super indoor season overall, hitting 7-0 or better in four meets.

The year-by-year progress has been pretty steady for Conner. He was a 6-4 jumper as a freshman in ’15, then improved to 6-9.25 as a soph while winning his first Class B state title. Last spring he was over seven feet twice and defended at state, but his summer overall was less than satisfying with multiple performances in the 6-8 range at major meets – that’s what made NBNI so sweet. Conner has been unbeaten this outdoor season, with a 7-2.25 in April and a 7-footerat state. Now in Greensboro, facing much of the same field as NBNI, he looks to rise to the competition again.

The positive effect of winning a Penn Relays title is not to be underestimated. Alana Carroll, an Averill Park, NY senior, was thrilled to earn her gold watch in late April as she cleared 12-11.5 and improved from 4th in ’17 and celebrated with a group that included her wonderfully named Hudson Valley “Flying Circus” Pole Vault mentors. A week later at the small Johnstown Invite, she flew over a career PR-tying 13-6 – a mark that still stands as her best and puts her in good position to contend for the NBNO title, along with Mackenzie Horn and others.

Carroll’s 2017 NBNO experience was not so hot. She came in as a 13-footer, but leapt just 12-2 and finished deep in the pack. It took her awhile to get going indoors, but at the Yale Classic in mid-January, she reached 13 feet for the first time since the previous May. Carroll was a consistent 13-footer the rest of indoors, taking 2nd at Millrose and 3rd at NBNI, and hitting 13-6 for the first time at state. The Harvard signee will come into NBNO off another state title, with 13-0 on the nose, and hope that 13-6 or better is in the cards for her in Greensboro.

KC Lightfoot – In any other year…

He broke through the 18-foot barrier at the April 12 Gary Parker Invite in Missouri. A month later he improved his PR to 18-5. Ten days ago, he won Great Southwest at 18-3.75. In all, between the Parker and GSW meets, KC Lightfoot pole vaulted 18 feet or better in SEVEN consecutive meets. Prior to 2017, that would have been unheard-of in boys’ prep competition and the Lee’s Summit senior would probably be the #1 candidate for overall prep T&F athlete of the year. But in a world that includes the other-worldly Mondo Duplantis – who competes vs. the pros and is nearly the planet’s best vaulter, period – Lightfoot is merely history’s #2 prep.

Sixteen months ago, Lightfoot cleared 17 feet for the first time indoors, improving his ’16 soph PR of 16-9, and then took 2nd at NBNI behind Mondo’s first 19-footer. Since then, the Baylor signee has actually closed the gap. Outdoors he reached 17-8.5 to win GSW, but then was a disappointing 6th at NBNO. Then this past winter, he was very consistent between 17-3 and 17-7 before reaching 17-9 at NBNI – taking 2nd in a thrilling competition with Zach Bradford (18-0.5). Now, while Mondo battles on the Diamond League Circuit, Lightfoot will go for titles at both NBNO and USA Juniors this weekend as he completes his epic campaign.