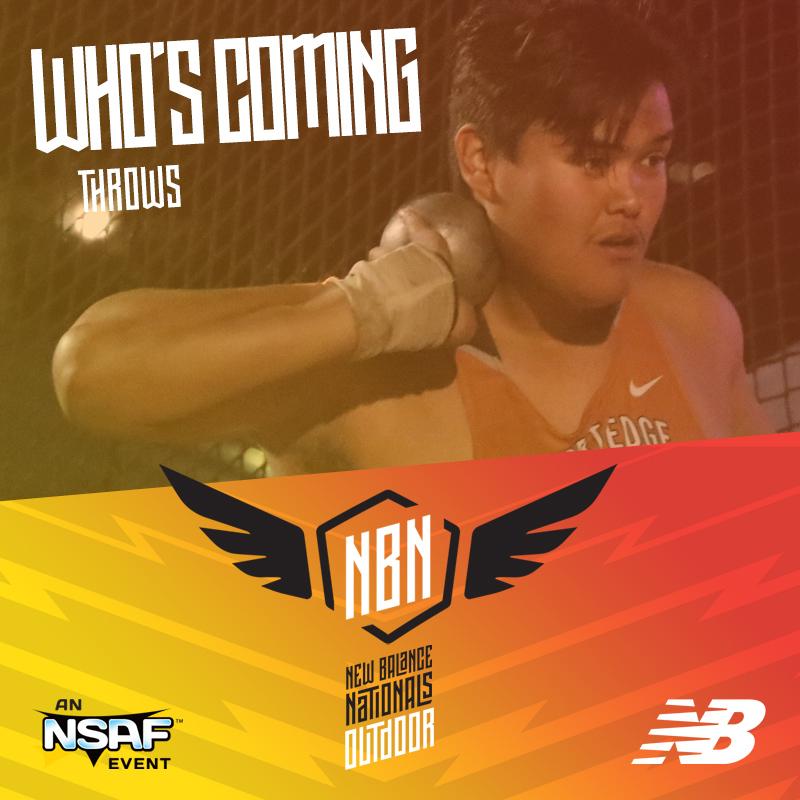 Tyson Jones – Taking the next step

A great indication that Arizona throws standout Tyson Jones was going to be at the top of the heap in the 2018 prep boys’ shot put came at the Dunamis Super Meet near Atlanta – of all places. In what was basically his season opener, the senior took a little time to get going, but once he did … He heaved the 12-pound ball 69-7.5 on his final attempt, a mark that would lead the nation until almost the very end – despite the fact that Jones didn’t throw the rest of the winter. Outdoors, he’s been even better, throwing over 70 feet three times, including a US#1 71-8.5 at the Tucson Elite Meet, then 71-8.25 at the Iron Wood Throws Classic.

Jones is the 2nd Arizona thrower in as many years invited to compete with Team NSAF in its annual Caribbean meet as a junior, and then make a big step up as a senior to national prominence. In 2016, it was Turner Washington (Canyon del Oro, ’17) joining Team NSAF in Cuba, then last spring leading the nation in the discus. Then Jones made the trip last year, performing equally well, and now in ’18 the Virginia Tech signee has really found his groove. Besides the 70+ marks, he’s hit 68-6 or better in six other meets and has a 196-9 discus PR as well.

“Montana” is a great (last) name for a big-time thrower; like the state, it just sounds “big.” As a Berwick HS (PA) freshman in 2015, Payden Montana had a bit of an inauspicious outdoor state meet debut, throwing just 35-3 in the shot at state – 18th place and well under her PR. But she was just getting started. As a soph, she PR’d at state, coming through with 42-6.5 for 3rd place. Then in the winter of 2017, she duplicated that state meet finish during her first full indoor season, hitting a 44-3.25 PR before taking 12th in her 1st NBNI. Then outdoors Montana captured her first AAA state title with 47-3 before improving her national placing to 7th at NBNO.

Now as a Penn State-bound senior this year, Montana has fully made her way on the national stage. She had five meets at 47 or better this past winter, peaking at 49-5.25 for another state title, and then taking the runner-up spot at NBNI at 47-2.5 (her only loss of the year). A new career peak came at the Penn Relays, where she improved from 3rd in ’17 to win the gold watch with her first career 50-footer – 50 feet, 7 inches and a US#1. Montana was over 50 feet again at districts and then scored a mighty state record PR 51-0 to defend her title. Now with several weeks atop the national list, she’s the clear shot put favorite.

Prior to his junior year in high school, Sam Welsh of Concord Academy (MA) had focused his athletic endeavors in basketball and baseball … until it was suggested to him in 2016 that he might be a pretty good discus thrower, too. With a growing fascination for the event and a natural curiosity, he started throwing on his own with his father and studying YouTube videos. He discovered he could throw 150 feet and, after he found a coach to work with in Tim Morse (from UMass Boston), he was able to improve enough to reach 195 feet in late spring of 2017. An athletic 6-4 and 220 pounds, he had a natural physique for the discus and his motivation to master technique led to strong results almost right away.

Welsh took 5th at NBNO with a 186-6 and then gained valuable experience over the summer in USATF JO competition. Now a Harvard-bound senior, he has ascended to the top in 2018. At the 2nd Annual Concord Relays in early April, Welsh became the first prep of the season to go over 200 feet with a 202-4. He had other meets close to that mark, with the regular-season target being the NEPSTA D3 champs in mid-May. There Welsh exploded to a PR 212-0, the furthest throw ever by any prep from Massachusetts. This time, when he heads to Greensboro this week, he won’t be the guy no one had heard of, but the meet favorite.

As a junior class thrower in the outstanding Wakefield HS (NC) program, Veronica Fraley was a 2016 National Youth champion, 4A state runner-up and had a new discus PR of 154-10 when she was invited to join Team NSAF for its Caribbean Scholastic trip to Havana, Cuba last spring. There she hit a new PR of 157-2 that gave her further momentum into the post-season. Fraley at first struggled to top that at NBNO and in her USATF JO qualifying meets. But at the nationals in Kansas, she exploded to a 170-4 PR and runner-up finish that prepped her for a great senior year.

As a senior and Clemson signee, Fraley has had a super senior year. She hit 171-10 in March, then scored major victories at the Florida Relays and Bojangles Classic. Then at the Penn Relays, where she was way off form in ’17, she launched a new PR and US#1 175-9 to win the gold watch. Since then she has claimed her first state title and had three more meets in the 160s – including at the Iron Wood Classic, where she was beaten in the discus but crushed a new shot PR at 49-5.5. Fraley is the top discus entry at NBNO and hopes to claim her first national title in her home state.

From his freshman year in high school three years ago – when he was already a 52-foot shot putter and 170-foot discus thrower – Patrick Larrison has shown potential to be one of the best in the nation. Now in 2018 the Moore HS (OK) senior has seen that potential come to fruition as the year’s top prep combined shot, discus and hammer/weight thrower. As a soph in ’16, Larrison took a big step by improving his shot to 60 feet and discus to 189-6. Then last spring, he had strong early-season PRs of 64-1 and 190-9, but couldn’t improve on them.

This year, however, Larrison has taken a big step forward. Indoors, he hit a mighty 66-7.25 shot in January and claimed the NBNI title with a 67-6 PR in March. In his first year throwing the weight, he added a 71-4.75 for a 3rd-place finish. Outdoors, Larrison has PR’d in the discus five times, reaching a then-US#1 210-9 to win his 3rd 6A state title (currently US#2). At the OTCA Meet of Champs, he matched his shot best with another 67-6. At Iron Wood, he threw all three implements, including a 196-7 PR in the hammer that elevated his newest discipline to national class levels. The Kansas signee will come to Greensboro with All-American aspirations in all three and with a good shot for at least one title.

Standing 6-foot-3 and with All-State credentials in basketball (Class A 2nd team) and volleyball (Div. 1 honorable mention), it’s understandable that Corinne Jemison would be focusing on one of those sports for her collegiate future. The East Kentwood HS (MI) senior’s parents were both collegiate basketball players, but she has reportedly been planning to focus on volleyball at Miami U. of Ohio. Throwing disc and shot in the spring, Jemison hit PRs of 151-0 and 40-9 at D1 state last year for gold- and silver-medal finishes. By mid-May of this year, she had improved those marks to 158-11 and 44-0.

The past month however, has given Jemison reason to rethink her athletic priorities. At the Region 02-1 meet, she had a big shot put PR of 46-10.5 to upset state-leading Malin Smith, improving by nearly three feet. Then two weeks later at the D1 state meet, she shocked everyone with a massive, winning 49-11.75 to elevate herself into the US#2 spot and suddenly achieve a level in the sport that exceeds her volleyball and basketball aptitude. Jemison earned a runner-up finish in the discus at state, as well, but it will likely be her battle with Peydon Montana at NBNO in the shot that will grab the attention of college coaches who hope to change her mind about her sport of choice.

The NBNO boys’ javelin is full of interesting storylines in 2018. At the top, you have Tzuriel Pedigo, the Louisiana senior who has pursued a national schedule this spring and has held the US#1 spot since his mighty 238-6 at the Penn Relays (#5 all-time). The pursuers include a pair of super sophomores from the NSAF’s Project Javelin: Sam Hankins (220-9 PR) and Zechariah Blake (208-6). But the hottest prep javelin thrower in the country right now might be a Rancocas Valley, NJ senior whose older brother was a 2-time All-American and 3-time state champion. Nick Mirabelli fired the javelin 227 feet, 10 inches, this past Saturday to set a New Jersey record and surpass brother Chris’s 2014 best by 13 feet.

Nick Mirabelli had bests of 158-10 and 178-7 during his freshman and sophomore seasons, then as a junior in 2017 improved to 213-5 and was runner-up in the Penn Relays. But he struggled in his biggest meets, the NJ Meet of Champs and NBNO, throwing less than 190. As a senior, however, Mirabelli has been consistent over 200 feet – hitting 220-10 to start the season, 218-11 at Group 4 state and then his monster PR at this year’s MOC. The Texas A&M signee is in a great position to challenge for the NBNO title before following his brother – who was Big 10 and Penn Relays champ for Rutgers in ’17 – into the collegiate ranks.

Samantha Kunza – Out of Missouri

Missouri may seem to some like an unlikely hot bed of hammer throwing, but 2016 Olympian and recent American record-setter Deanna Price is from St. Charles and prepped at Troy-Buchanan HS (2011) – ranking 3rd in the US as a prep senior before becoming a collegiate star at Southern Illinois and all she’s achieved beyond. Seven years later, from the Throw for the Road Hammer Club, has emerged a new all-time great from the state. Samantha Kunza – a Timberland HS junior from Wentzville – has reached 195-6 to lead the U.S., and she still has another year to go.

Samantha’s brother, Patrick (Class of ’15), preceded her with the club and at Timberland, and is now excelling at U. of Missouri. Samantha started out with a 157-5 best as a freshman, the #2 9th-grader in the country. As a sophomore in ’17, Samantha had a 169-0 best, but then was just 17th at NBNO with 145-11. This year, however, she’s taken a big step, adding nearly 30 feet, and is coming off a big 188-7 triumph at Great Southwest – where she was runner-up last spring. She seems primed to win her first national title and then possibly challenge for the national record as a senior.