This is the last in a five-part series, a joint effort with the NSAF and Runnerspace.com, highlighting some of the exciting confirmed entries for the 2017 New Balance Nationals Outdoor in each event category! Previously: Part 1: Throws  |  Part 2: Jumps  |  Part 3: Sprints/Hurdles  |  Part 4: Distances. Also check out: FULL ENTRIES |  FULL START LISTS 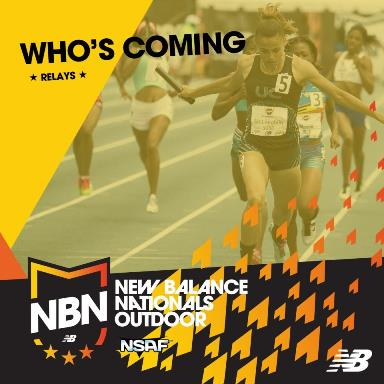 With few exceptions, Michigan isn’t known for producing super-fast sprint relays – not a lot of warm-weather opportunities that typically foster excellence in those events. One of those exceptions has been East Kentwood HS under Coach David Emeott. Kentwood TC won the NBNO boys’ 1,600 sprint medley in 2010 with a 3:22.99 that ranks #13 on the all-time U.S. list and is fastest in Michigan history.

Now in 2017, Khance Meyers, Stephan Bracey, AJ Jeffries and Jacobie Welch have clocked a blistering 1:26.07 4x200m, the 4th-best time in the country outside of Texas, and #2 performance of all teams entered here behind Mansfield Lake Ridge HS in TX.  Meyers was unbeaten in Michigan this spring, including a 10.53/21.27 double at D1 state. Bracey is a soph whose now-graduated sister Sekayi was an all-time Kentwood and Michigan great. This could be the 2nd time they top the podium.

Kaylor is back … and this time she’s bringing her teammates. Kaylor Harris, now a Mesquite Horn HS (TX) senior, put together an outstanding resume to start her career and was invited to represent Team NSAF in the 2016 Caribbean Scholastic Invite (CSI) in Cuba. The she came to NBNO a few weeks later and was something of a surprise winner in the Championship 100 – dashing to a PR 11.34. She had also been part of a 45.79 4x100 during the regular season

Now in ’17, with fellow seniors Lyric Choice, Taylor Blackshire and freshman Le-Taija Jackson, Mesquite Horn has moved from the elite in the 4x100 to the super-elite, with a 45.27 to win the Texas Relays, then a smoking, nation-leading 44.94 to capture the 6A state title – #9 on the all-time list. Meanwhile, Harris has added the 100H to her resume; she won that event at state, along with 2nd in the 100, and she’ll run both here.

Miami Northwestern has forever been known as one of the nation’s elite programs, namely the girls’ team coached by 2-time NSAF Mike Byrnes Coach of the Year Carmen Jackson. But the boys’ program is historically outstanding, too. Coach Darryl Elmore guided the Bulls boys to a 3A title this year and a lot of it had to do with a 4x400 that ran 3:10.56 back in March at the Pepsi Florida Relays that still leads the nation.

That quartet is led by Thomas Burns and Tiondre Toomer. Burns has progressed from a frosh phenom with 14.30 110H and 37.22 bests to one of history’s best long hurdlers as a junior. He’s been under 36 multiple times, including a 35.25 at Great Southwest that ranks #2 all-time. Toomer got down to 47.08 for the flat 400 at the 3A state meet. They’re joined by junior Nigel Bethel Jr and senior Frederick Gonsalvies … and favored in a great field with several sub-3:15 squads.

Olympian Sydney McLaughlin will long be remembered at Union Catholic for running some of the most electrifying relay legs ever seen in girls high school track and field. She ran the fastest relay split ever recorded at the Penn Relays in April when she ran 50.37 seconds in the 4x400 Championship of America.

Of course, successful relays stand like a table -- with four legs, not one. Sophomore Khamil Evans, junior Amaya Chadwick and senior Cassandra Lamadieu will join McLaughlin in the 4x400 relay. But first, freshman Sydney Tucker will team with Chadwick, Evans and McLaughlin in the Swedish Medley Relay (100-200-300-400), an event that Union Catholic has won the past three years. Under coach Mike McCabe, Union Catholic has always enjoyed putting together championship-level relays and this year is no different.

Back in April, the Oxon Hills boys of Maryland enjoyed a dream weekend at Philadelphia's Franklin Field, qualifying for the Championship of America finals in both the 4x400 and 4x800 at the famed Penn Relays. In the 4x800 the quartet -- Anthony Wimbish, Aaron Robinson, Randy Serville and Gary Ross -- broke the Maryland state record with 7:40.35 in qualifying for the final.

With Daniel George subbed in for Wimbish, and then also ran 3:12.72 in the 4x400. The Clippers wore out a bit with those big performances in the trials and did not run as fast in the finals. Two months later, Oxon Hill has a chance to see if it can run faster and possibly win a national championship.

It was a surreal sight for all of the NSAF crew that had gone to Cuba the previous May: Joy Ripslinger of Assumption HS (IA) and a #CSICuba16 alum trying to chase down Kayla Johnson of South Dade Express / Miami Southridge HS (FL) – and also a #CSICuba16 alum. NSAF teammates in May ’16, then fighting for a NBNI 1,600 Sprint Medley Relay title this past March. Johnson was having an off weekend and Ripslinger was afire – splitting 2:09.9 for the 3:59.31 championship triumph.

Fast forward three months and Assumption is firmly in the mix for another title in the event. She has a PR of 2:07.51 and will be joined by senior Jasmine Harris, and sophomores Lea Nelson and Carly King (with Nelson replacing Mary Grace Carroll from indoor). A strong field, with several sub-4:00 squads will be there, so Assumption will need the race of its life to make it an in/out double.

The top distance and middle distance runners of recent vintage in the strong Green Hope HS (NC) program are best known nationally for their Penn Relays performance in ’16, when they ran 7:41.01 there and took 3rd overall and were the first U.S. squad. Later in the N.C. 4A state meet, they clocked 7:38.83; both performances were all-time state records. Two stars graduated from that group and in 2017 their strengths tend a bit more to longer races.

Hence, the entry and the unofficial nod as favorites for the 4x1 Mile here at NBNO. Green Hope has a balanced group of 4:17 to 4:27-type runners, led by 4:17 runner Ian Delgado – the junior who was chosen for Team NSAF to compete in Cuba this spring. He will be joined by juniors Peyton Barish, Ares Epps and Finnegan McBride – who have each run between 4:20-4:30. They ran 17:40 for 4x1600 earlier in the season, but their current PRs suggest they can run 15-20 seconds faster.

The Eagles ran US#7 8:59.01 at the New York Section 11 State Qualifier and went on to finish third at the New York state championships. The sub-nine performance was a school record and was only the second ever by a Suffolk County (N.Y.) team, joining Bay Shore's 2003 team.

The quartet of senior Noela Franco, senior Dana Beggins, junior Tara Hauff and senior Paige Keefer enters NBNO with a chance to compete for the national title. The three seniors have been running together since seventh grade for Coach Phil Armato. Keefer, who has an 800 PR 2:07.95 in the 800, will compete at Towson University.