This is the fourth in a five-part series, a joint effort with the NSAF and Runnerspace.com, highlighting some of the exciting confirmed entries for the 2017 New Balance Nationals Outdoor in each event category! Previously: Part 1: Throws  |  Part 2: Jumps  |  Part 3: Sprints/Hurdles. Coming in the days ahead: Part 5: Relays |  FULL ENTRIES |  FULL START LISTS 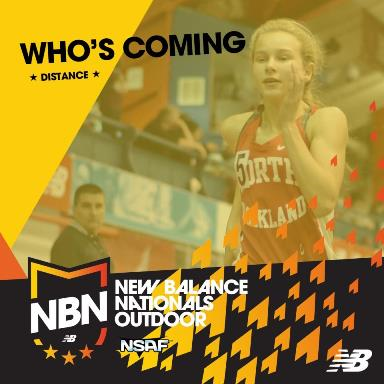 If it seems like Katelyn Tuohy should be at least a sophomore or junior at this point, perhaps it’s because we’ve seen her so many times already on the national stage – looking so much like the seasoned veteran while leading her North Rockland HS (NY) teammates to major relay titles with her strong DMR anchor legs. It started at the 2016 NBNI with her 1600 leg to finish off a national record (11:34.85), continued with another clutch anchor to win a tight NBNO battle three months later (11:29.39), then snowballed in ’17 with an NBNI title defense (11:41.04) and a first Penn Relays triumph (11:45.11). Meanwhile, unless you were in New York following the regular season meets, you didn’t see Tuohy much in major meet individual events.

Well, that’s changing now. In final stages of her freshman year, Tuohy is simply getting faster and faster, and it’s becoming clearer and clearer she has the right stuff to win on the national level individually as she prepares for the NBNO mile as the girl to beat. The final performance that made that crystal clear came last week at the New York state meet when she smoked a 4:18.51 1,500m, moving into the top 15 on the all-time list and second only to Bronxville, NY alum Mary Cain among 9th-graders in history. Whether or not comparisons to Cain – a prep legend who turned pro and who’s had athletic ups and downs since – are relevant, Tuohy has joined the legion of young super-talents in girls’ distances and it will be exciting to see her take the next step here.

When you think of sub-1:50 prep 800-meter runners, you tend to think first of Cameron Cooper and Brandon McGorty – who have each been at that level for a while now and been lead contenders for NBN titles – and then perhaps Sam Worley, the 4:00 miler who has the US#1 1:48.25 this spring. But if you’re in New Jersey, you think of Rey Rivera – the Old Bridge senior who’d been pushing that barrier since his sophomore year in 2015 and has now surpassed it during his past two outings. Rivera last lost an 800 in NJ more than two years ago and it was at the ’15 outdoor Meet of Champs that he first ran a 1:50-point – a shocking 1:50.82, to be exact, for someone who had a 1:54 PR at that point.

The past two years, Rivera had added several 1:50s to his resume, including a very impressive 1:50.04 runner-up finish to Cooper at NBNI this past March – beating McGorty, to boot. Then finally in his Group 4 state meet a few weeks back, he hit 1:49.59 to finally get the breakthrough he’d been yearning for. He followed up with 1:49.96 to win his 3rd Meet of Champs title. Now he’ll face Cooper and McGorty again in Sunday’s NBNO 800 final, knowing he, too, is a member of the sub-1:50 club.

It seems like Jessica Lawson has been part of the elite distance running scene in New York for so long that it will seem strange without her next year when she’s off to college. She started her career at Corning HS in NY as a freshman back in 2013-14 as an elite runner from the get-go – winning state and Fed titles in XC, then capturing 3k crowns in both indoor and outdoor track. Lawson ran as fast as 9:41.55 for 3k, made Foot Locker Finals in XC and was a 5k All-American at NBNI. With that elite of a start, and having lost pretty much her full 2015 track season to injury, she still has continued to make steady progress. National titles at either 5,000 or 2 miles are within her grasp this weekend.

Josh Hoey – Getting it together at the right time

Josh Hoey really made a big name for himself when, as the sophomore younger brother of senior Jaxson Hoey, he won the 2016 Penn Relays mile with a PR 4:11.90. Jaxson had been an established star at Downington West HS in PA – having run 4:11.07 himself for 5th at Millrose that winter. But while he had an off day at Penn, Josh broke out and seemed poised to become the next great young American distance runner. But it hasn’t always been smooth sailing since. Josh (4:11.36 1,600) and Jaxson (1:51.58 800) would each have 3rd-place finishes at state, then neither ran their best at NBNO. Then it was off to Penn State for Jaxson.

Meanwhile, Josh Hoey transferred to Bishop Shanahan, also in Downington, PA. He had season-ending struggles in XC that kept him out of state, but during indoor he got back to full fitness and then some. He captured the NB Indoor Grand Prix mile at 4:09.30, the state 800 at 1:52.21, then was a strong 4th at NBNI in the mile at 4:08.59. Outdoors, Josh was off form at Penn – taking 4th – but has closed the season very well with a PR 1:50.13 state title run and a 3:50.71 1,500 at the John Hay meet. That makes him the guy to beat in the NBNO mile – along with Dalton Hengst (who is registered for the 2M, as well, and may not contest both). That promise displayed in 2016 continues to grow.

One of the great “who is THAT?” moments for national track fans this year came late in the indoor season when Clayton Mendez – a junior at Chicago’s Whitney Young HS – ran 9:01.89 for 3,200 at the Proviso West Invite (actually in the middle of the Illinois season). The mark was a PR by more than 20 seconds and took the national lead at that point – and no one outside of Illinois had heard of Mendez. The mark wasn’t a huge shock to those who knew him, though. Even four years earlier in middle school, Mendez had run 1:57 for 800 and he had been a strong 12th in the 3A state XC meet in ’15 as a soph. It was just a matter of health, fitness and the right race at the right time.

There was never a question whether Clare Martin had the talent – or the range – to be one of Massachusetts’ best distance runners and even among the national elite. That much was clear to some extent her freshman year at Newton South HS (MA), and certainly so her sophomore campaign – with marks of 2:10.27 for 800 and 5:01 for the mile. There were more good marks in 2016, with a bit of improvement, but perhaps not the consistency she would have liked.

If local fans from the Greensboro area are searching for someone to cheer for this weekend during NBNO, they need look no further than Friday evening’s featured boys’ 5,000 meters – where a somewhat unlikely favorite has emerged. W.H. Page HS senior Ian Shanklin certainly was a “rising star” coming into this spring, but hadn’t necessarily distinguished himself with credentials that would have suggested a national championship favorite by June. Opportunities to race in loaded, fast-paced fields will sometimes usher in breakthroughs for less accomplished athletes and that’s what’s happened here.