The last in a 5-part series on some of the leading contenders and first-time athletes or relays that are highlighting the entries for the 2016 New Balance Nationals Outdoor.  Check out the previous installments of the series at the following links:  THROWS  |  JUMPS  |  SPRINTS-HURDLES  |  DISTANCES. 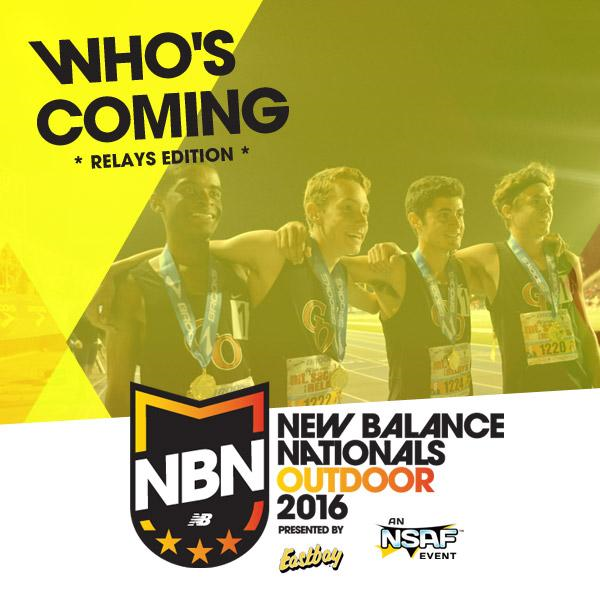 Arguably the best team/relay story from the 2016 prep outdoor track season has come from the boys’ of Great Oak, CA, coached by Doug Soles.  That the Wolfpack had extraordinary boys’ distance talent and depth – as they also have had for the girls, and for several years now – was clear.  The question was whether this year’s best-ever group could simply get to the line healthy on the right day and perform to their capabilities.  The answer?  Well, what do the numbers 16:55.85 and 16:52.95 mean to you?  They sound like moderately good boys’ 5k or really good girls’ 5k times, but they’re actually boys’ 4x1600m performances by GOHS – the first such performances in U.S. prep history with a “16” in front of them.

Western Branch has long established itself as one great all-around track and field programs in the country, especially in the sprints, hurdles, horizontal jumps and even middle distances.  They’ve racked up more than 2 dozen NBN championship and emerging elite titles in the past several years, including multiple national records in the shuttle hurdles, and an amazing four boys’ titles at last year’s NBNO.  Coach Claude Toukene won the Mike Byrnes Coach of the Year award at the 2014 outdoor nationals and this year’s squads are again powerhouses.  But if there’s one event that earns “signature” status this spring, it’s the girls’ 4x800.  This group, however, has had more ups and downs than meets the eye.

At NBNI, they won with 9:02.27, but the sense was that there might be more there.  Then at the Penn Relays, they ran 9:10.39 in the prelims and 9:03.53 in the final, taking 6th.  Coach Toukene expressed displeasure with the performance in the prelim and the final wasn’t what it could have been.  Five weeks later, however, the Bruins took a huge step towards fulfilling that potential, with an 8:51.61 triumph to take the 6A state title.  This, this was more like it.  The talent in the group is stellar, paced by do-anything senior Faith Ross – who is national class from the 55m dash and hurdles all the way through the 800 and probably beyond.  It also includes Adriana Shockley, Martina Smalls, and Amanda Thomas – who is also capable of sub-2:10.

A major transfer after the 2014-15 season has made a big difference in a Washington, D.C. school going from good to great in the relay department.  Maxwell Willis transferred from Bowie (Md.) HS to Archbishop Carroll and the result for the school’s relay fortunes has been tremendous.  With speedsters Stedman Cook, Kendall Leach and Justin Davis also on the roster, it was clear the Lions were going to contend nationally in all of the sprint relays.  During the indoor season, they were the #2 squad on both the 4x200 and 4x400 national lists for the season (including oversize tracks), hitting 1:27.54 and 3:16.11.

The girls of Miami Northwestern, on the occasion of Coach Carmen Jackson receiving the NSAF’s Mike Byrnes Coach of the Year award, came to Greensboro last year and scored an impressive 4x100/4x200 double, including a near-meet-record 45.57 in the former and a truly smoking NBNO standard 1:34.47 in the latter.  They added a pair of 5th place finishes in the 4x4 and Swedish Medley, while standout soph Twanisha Terry was 2nd in the 100.  Now in 2016, with veterans Terry and Timetria Mitchell leading the way, the Bulls are back to do some more damage and perhaps battle Western Branch for overall team supremacy.

The Northwestern girls have the top seed in the 4x200, where they’ve run 1:35.65 last year.  It’s not an event commonly run in Florida, and the time was from an early-season invite – so it will be interesting to see if they can progress here.  They will also be a medal contender in the 4x400 and Swedish medley again.  But the new thing for them this year is the 4x100 meter hurdles.  It’s not something they ever run, but NW has a really good group this year, with Mitchell at 13.61, and Charlease Rodgers, De’Andreah Young, Ariayanna Val and Taranique Alexander all in the low-mid 14.00s.  Could they possibly wrest the title from 2-time record-setter Western Branch?

A narrow defeat at NBNI this past March might have been the key to what this squad and this distance program at State College HS in PA has accomplished since.  In 2015, the Lions had finished the season with a 7:41.50 for 3rd place at state, but didn’t run the post-season.  This past winter, the quartet of Owen Wing, Nick Feffer, Tony Degleris and Alex Milligan began running well, and went under 8:00 with a 7:51.59 triumph at Millrose.  They improved at indoor states with a 7:48.29 win, putting themselves in good position to contend for the top of the podium at NBNI.  But Milligan’s fast anchor and an overall 7:45.60 couldn’t quite overcome Dublin, OH in the final section of the championship, and Mountain Brook, AL’s 7:45.58 from the previous section was .02 faster, as well.

At the Penn Relays, State College was a well-beaten 4th, but they did improve to 7:44.74.  Finally, at the outdoor AAA state meet, with everyone running in peak form, they put together an eye-opening 7:37.25, taking over the national lead.  It was doubly pleasing that the victory, as well as Milligan’s 1,600 win, helped propel the Lions to a state team title under 1st-year coach Steve Shisler.  At NBNO, State College will face another squad in Great Oak, CA, that has run 7:37, too – plus some other squads with sub-7:40 potential.  Having broken though, though, the Lions will be tough to stop.

We knew they were good, but when it finally dawned on media, announcers and fans what was going down in the final laps of the girls’ distance medley relay at NBNI back in March, it became clear that a certain intriguing New York quartet was going to rewrite the record book.  Girls’ DMR teams had run in the high-11:30s to low-11:40s in multiple occasions in recent years in this meet, but no one had been able to put it all together to give Mountain View, Utah’s HSR of 11:35.43 from 2004 a serious run.  Now North Rockland, NY foursome of junior Alexandra Harris (3:28.51), seniors Camille Cameron (57.61) and Sydney March (2:15.19), and 8th-grade phenom Katelyn Tuohy (4:53.44) were making history with an 11:34.85 triumph.

Very often NBNI DMR champs then turn to the Penn Relays as the next race to conquer, especially if they are from the Northeast and Atlantic states, but North Rock was unable to compete due to the Penn rule of only allowing high school athletes in its events.  So put together a good 11:39.49 to win Loucks, but it’s only now at NBNO where they will again be at full throttle.  At last weekend’s NY state champs, Tuohy showed top form, clocking a spectacular runner-up 4:24.36 in the 1,500 and March and Harris have run some special times throughout the year.  The outdoor DMR national record is a much faster 11:22.23 (Harvard-Westlake, 2011), but North Rock projects as having at least 11:20 potential, so stay tuned!

Getting relay squads from the great state of Texas to NBNO is a challenging task.  There’s the obvious fact that Texas has one of the earlier state meets in the country, five weeks before nationals.  Then there’s the fact that a lot of the athletes will gravitate to other activities, such as spring football for the boys, and in other instances groups from a given school will be split up as they train and compete with their own clubs in summer track.  So it’s no small accomplishment that the blazing 4x400 from Arlington Bowie HS of Texas is expected to make it to the starting line Sunday for their signature event.  Bowie had average sprint relays last year, but the idea that this year would be above average became manifest early with fast marks from late-February to mid-March – with a best of 3:15.09 at their own relay meet.

Then at the Texas Relays in late March, the Volunteers – with Kobe Daniels, Ardran Carr, Braydon Johnson and Darien Porter – had their ultimate moment, taking the D2 4x400 in 3:12.31, a time that was the best in the nation and would stand up as US#2 for the year.  It’s been surprising, because Bowie has no one who’s run individually under 49 seconds this year.  Daniels and Carr have both run 49.3 or so, but Johnson has a 21.87 PR to Porter’s 21.52 in the 200.  Carr is a great 300m hurdler, though, at 37.13.  Something magic happens with the baton, though, and Bowie finished off their regular season with a 3:14.03 at 6A state – just off Lancaster’s winning time from 5A.  Five weeks later, fans will look to see if they can reprise that form.

With an experienced senior leader and a sprint group that’s been on a strong growth/improvement curve for the past few years, Nansemond River, VA is a definite contender to win at least one gold and have multiple podium finishes in Greensboro.  Known as WAR Track Club in meets such as this, they won their first national title under Coach Justin Byron at NBNI with a 1:37.43 triumph in the 4x200.  They have improved to a state record 1:36.19 outdoors and are seeded 2nd in that event behind Miami Northwestern.  The Warriors are seeded first in the 4x100, thanks to another state record 45.73, and probably have the best chance to win there.  Then there’s also the 4x4, where they should at least contend for a medal, if not the top 3.

The senior leader is Brandee’ Johnson, already a two-time international medalist – she won 200m bronze for Team USA at the 2014 Youth Olympics and 400H bronze at the 2015 World Youth Champs.  As that combination would indicate, Johnson excels at any sprint or hurdle distance, as well as the jumps.  Johnson and rising star Syaira Richardson are on each of the three key relay entries for WAR, with Richardson having improved to 54.27 for 400 this spring, along with some other strong sprint times.  Seniors Morgan Towe, Dajae’ Goulet, and freshman Kori Carter and Tre'Breh Scott-McKoy will also be handling various legs.