The fourth in a 5-part series on some of the leading contenders and first-time athletes or relays that are highlighting the entries for the 2016 New Balance Nationals Outdoor.  Look for the final installment of the series in the next few days and check out the previous installments --  THROWS  |  JUMPS  |  SPRINTS-HURDLES  |  RELAYS. 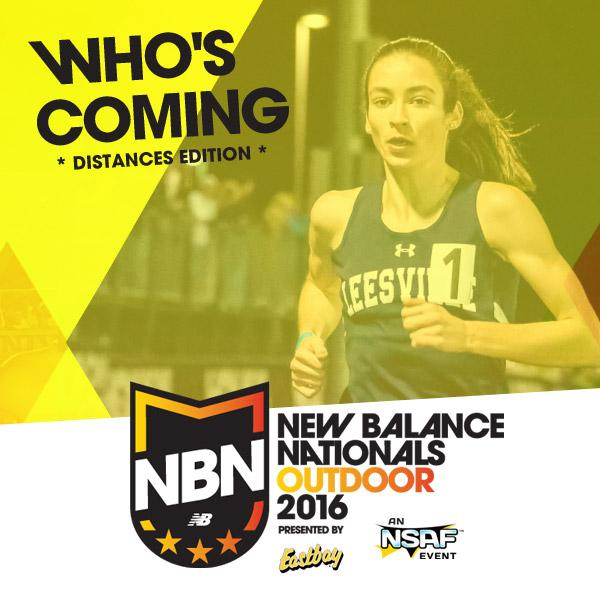 Home-state distance girls have had remarkable success in recent NBNO meets … well, ok, it’s mainly two girls from one family.  In 2013, Wesley Frazier swept the mile, 2-mile and 5000 meters, than two years later, her sister Ryen duplicated her feat with a sweep of her own.  Nevada Mareno isn’t attempting something quite that ambitious – no 5,000 for her – but the Leesville Road HS junior’s creds coming into the mile and the deuce are nearly as impressive: PRs of 4:43.47 for the former and 10:02.89 for the latter – though that was actually a 3,200 and was achieved in last fall’s “Dash for Doobie,” a track tuneup in Winston-Salem for the Foot Locker South XC race.

Brandon McGorty – Joining his brother at the top

The third McGorty distance running standout from Chantilly, VA experienced both sweet success and strong disappointment at this past March’s NBNI.  The high point was Saturday, as Brandon – Class of ’17 – anchored his “XBC TC” squad to a sprint medley relay national record 3:24.02 with his 1:49.53 800.  The low point came a day later when it came time to fend off the challengers in the boys’ 800 final and he came up empty, finally crossing the line 3rd behind Michael Slagowski in 1:51.36.  Another McGorty knows what it’s like to come up short in individual title bids the first time or two; oldest brother Sean – Class of ’13 – was 7th in his junior year NBNO 2M and 2nd in the NBNI deuce as a senior, before striking gold with a superlative 8:45.61 in his final race in Greensboro.

Not that Brandon, who tends to gravitate toward the middle distances more than his brother, hasn’t already had some moments this spring that make indoor memories easy to let go – like an epic 1:48.58 performance in the Dogwood 800 that handed sub-4 miler Drew Hunter his only loss to a prep this year.  Brandon also dug down deep to take a 6A state 800/1600 double while ill a few weeks ago.  So when he toes the line in the NBNO 800 Sunday – as the favorite, but with a lot of talent around him – don’t be surprised if he’s ready to join his brother at the top.

If you think you’ve seen Stephanie Jenks top the podium at an NBN event, then are surprised to realize she hasn’t, you’re not alone.  The extremely accomplished Linn-Mar, Iowa HS senior has run nine individual championship races over her four-year prep career, set class records and made the podium several times – finishing as high as second – but just hasn’t won yet.  It just seems like she has because she’s always in contention.  Most of those races have been at NBNI and her first race there – a 16:37.50 runner-up finish in the 2014 5,000 – and most recent, a 3rd-place 4:44.94 in the mile this year, have been her best.

As far as NBNO, she didn’t compete last year, but is back this weekend to try for that first victory – three of them, in fact, as she’s entered in the mile, 2-mile and 5,000.  Jenks doesn’t have the pressure of being a favorite, with the above-mentioned Mareno (1M) and Weini Kelati (2M and 5k) bearing those roles.  As far as her outdoor season, there have been ups – another triple at the Iowa state meet – and downs, such as a rough weekend at Drake.  Jenks doesn’t have a recent PR outdoors – well, except for the steeplechase, which she tried for the first time last weekend.  But those who’ve watched her for four years know she’s capable of beating anyone on a given day.

The steeplechase doesn’t get a lot of attention in most states around the country, and not much nationally until championship season, so you might not be aware of a senior in New York who holds the U.S. lead over 3k in that event and has run his way into the all-time top 15.  Eion Nohilly took the Empire State title last weekend with a stellar 9:06.36, nipping rival Noah Affolder, who clocked 9:06.52.  Nohilly was a 9:15 steepler last year, improved to 9:10.30 at his Section 1 state qualifier, then won state.  Adding to the impressiveness of the feat is the fact that he won the state 800 title the day before in a big PR 1:52.77.

If the name “Nohilly” and “steeplechase” sounds familiar to older fans, it should.  Eion’s father Tom wasn’t as fast in high school as his son, but he became pretty good down the road, winning the ’89 NCAA title in the 3k steeple, and taking 4th in the ’92 and ’96 Olympic Trials in the event.  He made the U.S. team for the ’97 IAAF World Champs and retired with an 8:16.92 PR.  Saturday, Eion will run the 2k steeple, coming in as the favorite after a runner-up finish 6:03.48 last year.  With that 800 speed and if the weather’s decent, he could give Bailey Roth’s HSR (5:41.67) a scare.

Despite the prospect of another solo effort, Jacobs came into the D2 state meet with the clear goal of getting under 9:00 for 3,200.  He won the 1,600 early in the day, running 4:22 without going all out, then rolled a remarkable 8:55.57 3,200 on his own.  Now he comes to NBNO as a top 3 seed and who knows what he can do with competition?  Jacobs isn’t the first small-school Michigan kid to make a national impact.  Maverick Darling came from even smaller Ovid-Elsie to run 8:57 at outdoor nationals back in ’08 before going on to a fine Big Ten and NCAA career at Wisconsin.  But Jacobs is younger and faster, and may have even greater things in his future.

After Ashleigh Resch concluded a great two-year run in NBN walks – winning two indoor titles, one outdoor crown and breaking the undercover HSR – no one probably though someone else would come and improve on that right away.  But that’s what Lauren Harris has done.  Three months ago the East Sachem, NY junior came to The Armory and threw down a 6:57.36, winning by 14 seconds and blowing away the 7:00 barrier that Resch had come so close to the year before.  It wasn’t entirely unexpected; Harris had been 4th at NBNI as a soph with 7:17.81, then walked 6:36.7h for 1,500 and 7:12.96 outdoor as she finished 2nd to Resch.

Then indoors this past winter, she had improved slightly to 6:35.16.  Suffice it to say, the mile performance was a step up from that.  Now outdoors, Harris has been a bit faster, with 6:29.33 for 1,500 her new PR and having been consistent within 5-10 seconds of that mark.  The national record for the mile outdoors stands at 7:00.87 by Heather Buletti in ’06.  Can Harris top that?  She knows that ultimately she’ll have to improve at 5,000m and beyond to make an impact beyond NBNO – but becoming the first to walk under 7:00 indoors and out would be pretty sweet.

When you go to an NBN meet, you expect to see great distance runners from La Salle Academy from Rhode Island, and when you see those La Salle stars, you expect to see them in relays – contending for victories, challenging national records.  But not this time – at least for the boys.  One of the powerhouse’s big three has other weekend plans and without Jack Salisbury, it’s unlikely that David Principe and Matt Bouthilette would be able to combine with teammates to seriously vie for a championship.  So at this 2016 NBNO, as “DJ” finishes his junior year and Bouthilette his career in the program, they will run individual events only.

Whenever you see the Principe and Bouthilette in major individual races, they are always contending for the victory – but that victory has been elusive.  Could that change this weekend.  The track 5,000 seems tailor-made for DJ and, indeed, when he ran NBNO last year as a soph, he was a strong 5th in 14:42.91.  Four others in the field, like Principe, have run sub-9 – so it may come down to tactics and endurance.  Bouthilette will be in the deuce, where he’ll battle the aforementioned Jacobs and 3-4 other sub-9:00 types.  He was 8th at NBNI in 9:03.45 and this time he’ll be fresh.  It would be interesting if these two closed out the La Salle dynasty with individual titles.