The first in a 5-part series on some of the leading contenders and first-time athletes or relays that are highlighting the entries for the 2016 New Balance Nationals Outdoor.  Look for the next four installments of the series in the days leading up to the meet --  JUMPS  |  SPRINTS/HURDLES  |  DISTANCES  |  RELAYS. 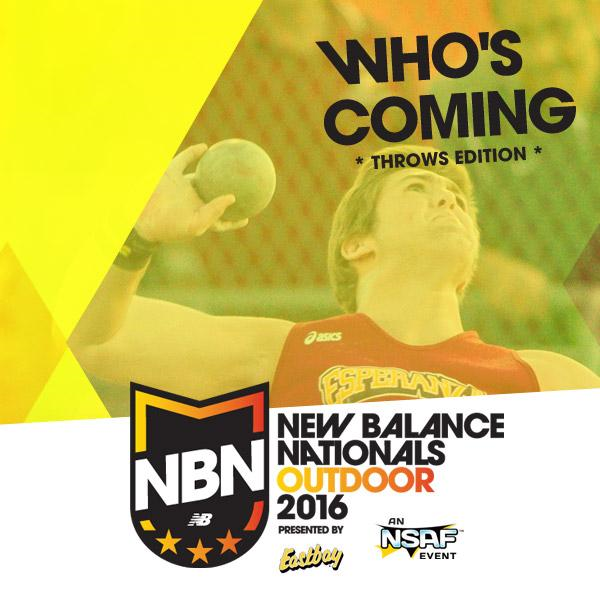 If you’ve been following the NBN indoor and outdoor championship shot puts the past few years, then the names Jordan Geist and Adrian Piperi will be very familiar to you.  They’ve contested the last three NBN meets, including NBNI in March when they went 1-2 – the same positions they currently occupy on the national outdoor list with their 74-3.5 and 71-11 bests.  No surprise – thankfully – they’ll be back in Greensboro for a rematch.  But what should get throws fans’ blood pumping significantly more is the presence of Bronson Osborn – the 3rd of this year’s four 71-footers – who will be competing in an NBN meet for the first time and will find himself in the unfamiliar role of underdog and potential spoiler.

It’s hard to imagine a 71-foot shot putter could be an underdog, but the Esperanza, CA thrower – also part of the incredible Class of 2017 – is exactly that.  He has faced these guys before, though, including last summer’s World Youth Trials, where he beat Geist, but was 3rd behind Piperi and Isaiah Rogers.  In ’15, Osborn was “just” a 61-9 performer with the 12-pounder, but started ’16 with a 68 in an all-comers meet, hit 70-0 in late February, then 71-7.25 at Mt. SAC in mid-April.  His one foray out of state, however, was the early April Texas Relays, where he 4th in the discus and did not throw in the shot (injury?) – while Piperi dominated both events with PR efforts.  So besides being an “underdog,” redemption might be on Osborn’s mind in Greensboro, too!

One is accustomed, at NBN meets, to seeing the hammer and weight throws ruled by athletes from the Throw 1 Deep club out of Georgia and from the Northeast states where it is most widely contested, like Rhode Island and New York.  So it’s a treat to get a hammer entry from Oregon for NBNO (it’s a treat to get any entries from Oregon!), especially a talented one like Maddie Rabing.  The Lakeridge HS senior has progressed this spring in the event from 165-0 in ’15 to 182-6 – good for US#4.  Adding to the intrigue is the fact that NBNO is Rabing’s first national-level meet and first meet at all in the eastern half of the country.

But Rabing is far from just a hammer thrower.  She’s also the #6 shot putter in the country and, at this point, she’s the #3 entry in each event.  With three girls over 54 feet and two more over 51, this has been an historic year in the girls’ shot, and Rabing is just 11 inches from the 50-foot barrier with a PR of 49-1.  She is coming off the May 20-21 6A Oregon state meet, where she won her 3rd straight shot title and was 3rd in the discus, and a 175-3 win last weekend in the first state hammer champs.  This weekend, preceding NBNO, she’ll head to Idaho for the NSAF’s Iron Wood Throws.

On May 14, 2016, Terrell Adams’ world – at least his world as an athlete – changed forever.  That was the day when, at the NCHSAA 4A Mideast Regional, he unleashed a mammoth winning discus throw of 213 feet and 9 inches.  Not only was it a PR by more than 25 feet, but it took Adams from being a good state-level thrower to being the national leader.  The level of improvement naturally invites skepticism, or at least questions of what the wind was like that day.  Adams’ day was more than just one great throw; he exceeded his previous PR of 188-0 on each of his first four throws – 188-2, 197-4, 191-2, then the 213-9.  Video seems to confirm the accuracy of the distance and legitimacy of the venue.

At his 4A state meet the following week, Adams came back to earth, so to speak, with a winning 189-3 performance.  Now the Middle Creek, NC senior joins Team NSAF for the new Iron Wood Throws in Idaho this weekend, then – if he’s not surpassed – return to Greensboro as the top seed.  Lost in the hubbub about big throw is the fact that Adams has, overall, enjoyed great improvement this year and established himself as a great competitor.  His best throw as a junior was 167-8 and, since a 7th place finish at the Apex Relays on April 4, 2015, he is unbeaten in 18 meets – including back to back state titles.  Whether or not he can hit 213 again this year, you can bet Adams will be in the running for the title at NBNO.

At first glance, it may seem like Kiana Phelps has it all.  The discus thrower will be heading to track and field powerhouse U. of Oregon, one of the NCAA favorites, on scholarship this fall.  She has dominated in Iowa for four years with Kingsley-Pierson HS, racking up 4 state titles (+1 in the shot) and 4 Drake Relays titles, and it’s fair to say she’s on the crest of the wave redefining the overall athleticism and physical stature of throwers.  Three-time Olympian (and former prep national shot put record-holder) Michelle Carter calls herself the “Shot Diva” and f Phelps wanted to call herself the “Discus Diva,” she would likely get a smile and a fist-pump from most fans.

But here’s what Phelps still does not have: An NBNO title.  She’s thrown over 170 feet each of the past three years in the discus, but in 2014 – coming to Greensboro as the national leader (and soph-class national record-setter) at 179-7 – she was 3rd.  Last year, she moved up a spot to 2nd as Kaylee Antill pulled off the upset.  Currently, she’s US#3 at 173-10 and the #2 seed coming into NBNO.  Could this be the year she finally does it?  Phelps as repped Team NSAF – and won – both at CSI Cuba last year and twice now at Chicagoland Throws.  As the latter meet moves to Idaho now, Phelps will be favored to three-peat this weekend, then will make her final bid for a national prep title two weeks later.  It would be risky to bet against her!

The javelin is pretty big in Kansas, one of a handful of states where it’s seriously contested at the state championship level.  Usually there’s at least a couple 200 footers from the Sunflower State each year, and the roster of recent national stars includes Iain Trimble, Matt Byers, Johannes Swanepoel and Jeff Ast.  But Trimble is the only boys’ champion in NBNO (or NSAF outdoor) meet history with his 2007 title and Ast – the national leader at 226-2 last year – falls into the category of national leaders with an outlying mark: He never broke 200 the rest of the year.  Now enter Trenton Allen, a Derby KS senior who is US#1 with 221-3 and leads the NBNO field two weeks out from the meet.

But Allen is no outlier.  He was a 191-5 thrower last year, but was somewhat inconsistent, too – finishing 4th at 6A state and 15th at the Kansas Relays.  This year, however, he hit a PR 203-8 on April 1 at the Joe Vann Invite and hasn’t looked back since.  That was one of his shortest marks of the year, in fact.  He is unbeaten and has thrown 207 or better in seven meets since, including a monster 221-3 to redeem himself at the Kansas Relays and 210-0 to win 6A state.  In Greensboro, he’ll likely need every foot of his PR or more to beat the NSAF Project Javelin’s Liam Christensen, but in an event where consistency can be daunting, Allen has got it in spades.

Josie Schaefer – From the world stage to NBNO

At this time last year, Baraboo, WI discus thrower Josie Schaefer was not too well known outside … well … Baraboo!  Yes, she had been 5th in the Wisconsin D1 state meet as a freshman in ’14 and, in early ’15, she started consistently hitting 140s.  Then at the 4/28 Baraboo quad she threw 158-11 and two weeks later at the Baraboo Invite hit a jaw-dropping 169-4 – moving into the top 3 in the country.  But what could she do outside Baraboo?  Well, the next few months answered that question: Quite a bit.  Schaefer won her regional and sectional, got 2nd in the state behind standout rival Sam Noennig, then beat Noennig at the World Youth Trials in nearby Lisle, Illinois.

Suddenly, Schaefer was competing in the World Youth Champs – before she’d ever competed in any other national meet besides the Trials.  She handled it quite well, thank you, with a 5th-place finish in the finals.  Now in 2016, Schaefer is not a secret anymore and has surpassed 160 feet several times, with a best of US#4 172-8.  She’ll likely claim her first state title this weekend, then come to Greensboro as one of the top contenders, along with Kiana Phelps and Alyssa Wilson.  She will be, however, the only one in the field to have already competed for Team USA!

Michael Feldman – Family, not team, the key for hammer thrower

An interview with hammer thrower Michael Feldman at the Caribbean Scholastic Invite in Cuba last week revealed an interesting fact.  Team NSAF was the first “team” the Tottenville, NY junior had ever been a part of, he said.  Not just the first U.S. team, not just the first track and field team, but the first “team,” period.  Feldman doesn’t throw any other implement and New York doesn’t have the hammer in state competition, so finding club, college or USATF meets on his own is how he gets to compete.  But, ah, there is another thing – his father, Roman, is an internationally renowned hammer coach – his pupils including 2-time IAAF World Champ Andrey Abduvaliyev.  That, of course, changes everything.

So young Feldman picked up the ball and chain before he was even in middle school and has loved it since.  He hardly has the build of, say, a Robert Colantonio, but he makes up for it with speed and technique.  Last year as a soph, he was 3rd in the World Youth Trials at 193-6, then won the Hershey USATF Youth title at the same venue that week.  This year, he’s really begun to find his groove, hitting 223-1 in a club meet in New York, suddenly elevating him to 2nd on the U.S. list behind Colantonio.  While the Rhode Island star is the heavy favorite to win NBNO, expect Feldman on the podium and to continue to build toward great things in the future.

When we first encountered Meghan Owens at our Project Javelin clinic last fall, there was – frankly – a little bit of the shy, wide-eyed freshman thing going on.  And the Mercer County, KY 9th-grader didn’t give the immediate impression of a physically powerful athlete.  But her resume spoke for itself; she had won both USATF and AAU JO titles the previous summer (Youth 13-14) and had been consistent in the 130s with a best of 144 feet.  As the clinic continued, it was quickly obvious that not only could Owens launch the spear with authority, but her technique was quite impressive for her experience level.

Now, with a fine winter of training behind her, Owens’ improvement curve has been strong and the present and future is extremely bright.  She’s weathered – literally – a spring full of bad-weather open and college meets and extended her PR to 155-2, the #1 freshman in the country and #8 overall.  The summer season ahead is Owens’ “prime time” and she started the campaign with a 146-4 victory at the NSAF’s Cuba CSI meet in Havana.  But NBNO will be the first real test, as she competes against national record-holder Madison Wiltrout and some of her Project teammates for the first time, as well as the rest of a great prep field.