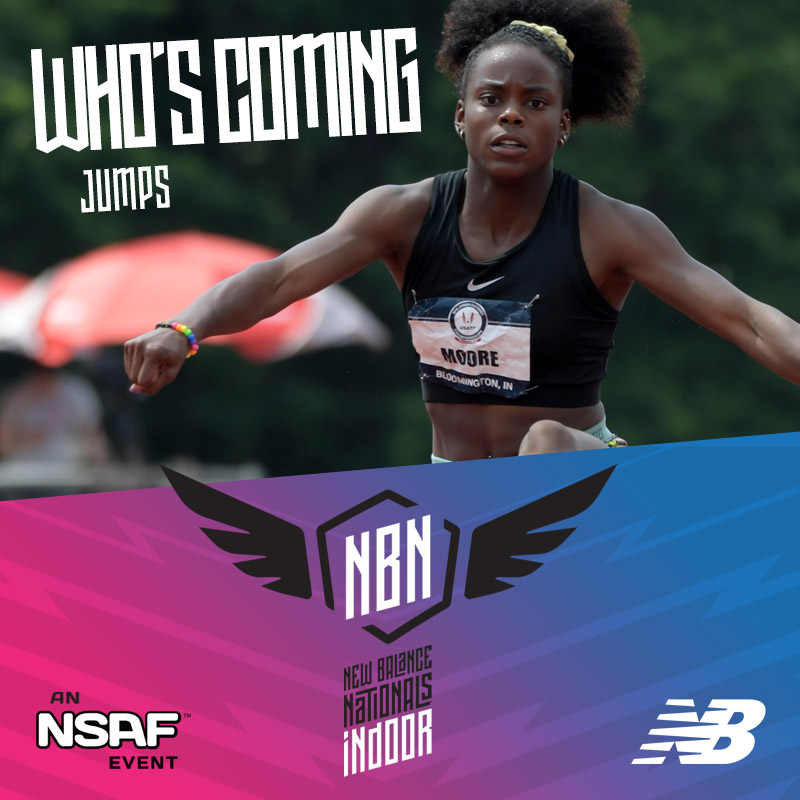 Jasmine Moore – Best-ever within her grasp

When the girls’ triple jump final begins during the last day of the 2019 NBNI, it will mark the beginning of the end of Jasmine Moore’s national career as a prep – and start of her attempt to make history and finalize her legacy in the event. She can become the first to win three TJ gold medals at NBNI as she chases Ke’Nyia Richardson’s national record. Three months later, she can establish herself as a 3-time NBNO titlist in the event. Imagine that … a career with six New Balance triple jump titles in six tries. The Mansfield Lake Ridge TX senior has never lost an NBN TJ and, with a current indoor seasonal best of 43-0 – more than a foot ahead of the field – it doesn’t look like she’ll start now. She’d also no doubt love to add a long jump crown or two to her collection – an event where she has three times finished 3rd in NBN competition.

Moore trails by one Keturah Orji (Class of ’14) for the most overall NBN triple jump victories. Both were members of the NSAF’s Project Triple Jump and Moore will follow Orji to the U. of Georgia this fall. There’s one thing Orji achieved as a prep her successor has not: An World medal. One of the toughest moments of Moore’s career came last summer in Finland, when she was just 10th in the IAAF World U20 TJ final. She will have her next Team USA opportunities this summer for the Pan American U20s, then summer of 2020 (after her freshman year at UGA) for the Worlds again in Kenya. The title of “greatest prep triple jumper ever” is within Moore’s grasp.

The resume for record-setting multi-eventer Anna Hall this winter is kind of fascinating. In what most would agree are her two best indoor events – the high jump and long jump – she has not yet improved her overall PRs (6-0 and 19-10.5) , though marks of US#4 5-10 and US#3 19-9 are still outstanding. In the 60H, she has gone from 8.82 to 8.56, now within the US top 20. What is, however, jaw-dropping is the way the Valor Christian CO senior has progressed in the shot put and 800 meters. Who the heck throws 42-3.25 (CO indoor state title) and runs 2:11.81 (Great Southwest title)? Those are the biggest reasons Hall is expected to annihilate Kendall Williams’ national record of 4,068 points – perhaps both at USATFs this weekend, then at NBNI – and win her third straight national pentathlon title. It would be a nice encore after she achieved prep history’s three best heptahlon scores in 2018.

But the UGA signee isn’t stopping there; she’s entered again in the girls’ high jump competition (this is a jumps preview story, remember?). Some years, a 6-0 leaper with a seasonal best of 5-10 would be a decisive favorite. This is a deep year in the event, however, with Morgan Smalls leading the US at 6-1, three others over 6-0 and four (including Hall) at 5-10. Among those, if she enters, is last spring’s NBNO champ Shelby Tyler – like Hall, a World U-20 finalist in Finland last summer. It might be fair to say that Hall would treasure a HJ triumph at NBNI in a special way apart from dominating another pentathlon.

Imagine having a state meet where you’re entered in three jumps and you not only win each event, you not only set PRs in each event, but you also establish (or match) the number one mark in the nation in each event. Such was the case for Morgan Smalls in the recent North Carolina 4A indoor championships as she high-jumped 6-1, long-jumped 19-11.25 and triple-jumped 41-9.75. In an era where more and more stories are being told by journalists as “oral histories,” where the words of the principal characters from interviews alone (almost exclusively) tell the tale, how interesting would it be to know the thoughts and reactions of Smalls, her coach(es) and possibly others on the scene as she kept building on her successes all day long and pulled off the amazing triple at the JDL Fast Track

Now Smalls’ TJ best was surpassed later that day by the above-mentioned Jasmine Moore, the 2-time defending NBNI champ, but the Panther Creek, NC junior remains the current top seed in the long and high jumps as we get ready for nationals weekend. Smalls has had mixed results in NBN competition in the past, the best being a stunning 3rd in the ’17 NBNO high jump as a 9th-grader – where she also won the Freshman TJ. She wasn’t quite as successful at last year’s NBNI. Now as a junior, the experienced she’s accumulated should add consistency and, with the three jumps unfolding with one each day, there won’t be the compressed schedule of a single-day state meet.

Julia Fixsen – Following great success… with the challenge of adversity

When Julia Fixsen finished as the NBNI girls’ pole vault runner-up last March, she might not yet have imagined the heights the event would take her in 2018. She vaulted 13-2.5 at nationals, and then three weeks later would improve to 13-9 at the Griak Indoor Classic back home in Minnesota. Outdoors, she would climb to 13-11.25, taking the runner-up spot at USA Juniors and earning her ticket to Finland for the IAAF World U20 Championships. There, she made the final and took a very respectable 7th. It was the end to an amazing junior year for the Mounds View, MN student-athlete.

Just as Fixsen knows success, however, she also knows injuries and “the road to recovery” as she mentioned in a recent Instagram post. She suffered a major ankle injury at the end of the summer, and it’s been a challenging 6-month comeback for her ever since. “It’s been especially tough having to hold back from training,” she said, but expressed gratitude for an opportunity for not only recovery time for her ankle, “but also a recovery of mind, soul, and spirit.” So far indoors, Fixsen has a modest seasonal best of 12-5.5. Several others are entered at NBNI who have vaulted between 13-0 and 13-6 this season; the next few weeks will tell whether the Minnesotan’s recovery will enable her to leapfrog them.

Speaking of injuries (see above), Justin Forde has met his own kind of adversity in recent weeks after establishing himself as a threat to win or medal in two or more jumps at NBNI. The ankle is also the culprit for the Brien McMahon HS (CT) senior, which first became a concern nearly two months ago. Forde flew to a high jump PR of 6-10 on December 22, but after that he was limited to a series of 6-4 meets. But Forde’s horizontal jumping kept progressing, especially the triple jump where he bounded to a stunning US#1 51-0 at the VA Showcase – beating a great field and topping his in/out PR of 50-3 from NBNO last spring. That mark still stands as the national leader and he also improved to 23-5.5 in the long jump in late January.

But then continuing to compete on the bad ankle became untenable for the U. of Miami recruit and he had to shut it down for a while, missing his state meet and other CT post-season competition. According to DyeStat’s Mary Albl, Forde’s coach Patrick Bradley said his protégé was cleared to practice this week and still plans to compete in the horizontal jumps at NBNI. Forde is a veteran of NBN competition in all three jumps, with that 50-3.25 outdoors last spring getting him on the podium in 4th. While his dreams of a 7-foot HJ have been deferred, he still has a chance at national glory in New York.

Sons following successful fathers in pole vaulting has become common in recent years among the prep elites, with national-record setting Mondo Duplantis (son of Greg) the most spectacular example – but there have been numerous others at the highest level. In 2019, maybe the best such story is what Max Manson is doing in Colorado. Last spring at the Colorado state championships, Max broke a 32-year-old meet record his father, Pat, set in 1986 when he cleared 17 feet, 3.5 inches for the victory. Max’s sister, Mia, triumphed as well at 12-6.

Pat Manson set the national prep indoor record at 17-6.5 back in 1986 as an Aurora Central (CO) senior, which stood for 25 years. He went over 18 outdoors, then on to Kansas where he excelled as an NCAA All-American, then on to a pro career where he PR’d at 19-2.25, won three Pan American gold medals and a Goodwill Games bronze, and made the 1997 IAAF Champs final (6th). Now his son Max is leading a great group at Monarch HS while his dad continues to coach. Max was 3rd at NBNI last year with 16-9.25. This winter he has been over 17 feet four times, including a US#2 17-2.75 at the USATF Colorado meet.

Charles “Omar” McBride – Whatever it takes to win

Charles – aka “Omar,” and aka “CJ” – McBride came into the 2018-19 indoor season with a high jump PR of 7-2.5, the top returnee in the country in the event. So far this winter he’s cleared just 6-8 – four times (and winning each). But many who have watched the Apex, NC senior in the past are not worried. McBride has a history of doing whatever it takes to win. That became strikingly apparent last spring when he represented Team NSAF in the Bahamas during its annual Caribbean meet. There ensued a ridiculously long jumpoff with friendly rival Randolph Ross before McBride finally won and rolled off the mat in exhaustion.

Two weeks later, he was the NBNO champ at 6-10.25, having prevailed on misses against five others. Then, finally at USATF JOs at the end of July, he achieved his PR with a staggering 7-2.5 in a jumpoff vs. Luke Nichols. McBride has done well before at NBNI, taking 3rd last year before his winning streak started. He also made the Youth Olympic team last fall, where the competition and conditions – also being out of season – proved to be too much. But until someone can prove otherwise, McBride will be the man to beat at NBNI.

2019 has been an amazing, barrier-breaking kind of winter for Mt. Sinai HS (NY) jumper and hurdler Kenneth Wei. Coming into the season, he had a long-jump best of 22-10.25 from last outdoor season – and arguably his best event – and career bests of 45-2 in the triple jump and 7.58 in the 55m hurdles. However, as Wei told Jordan Lauterbach of Newsday earlier this winter, he really made a commitment to training harder going into his senior year and, in particular, hitting the weight room harder to have a more complete approach to his training. He previously was one of the best jumper/hurdles in Suffolk County and on Long Island, but realized he could achieve more at a state and, possibly, a national level. Dividends came immediately in December as he upped his TJ PR by more than two feet at 47-2, then scored a 23-4.5 LJ best.

Wei had two more big breakthroughs at the Stanner Games in January, sweeping the 55H and LJ in 7.47 and 24 feet. He was now national class in three events. But he’s kept progressing … and winning. At his Section 11 County Champs a few weeks ago, he bounded an eye-popping US#1 25-0 in the LJ and improved his TJ best to 47-8.5. And just over a week ago at the section state-qualifier, he lowered his 55H mark to US#6 7.34. When Wei made plans before this season to attend MIT, of course one of the world’s great academic institutions, he knew he would continue to run and jump (NCAA D3) there. He didn’t necessarily know he was a D1 talent. But as he continues to break barriers, that’s exactly what he’s becoming.