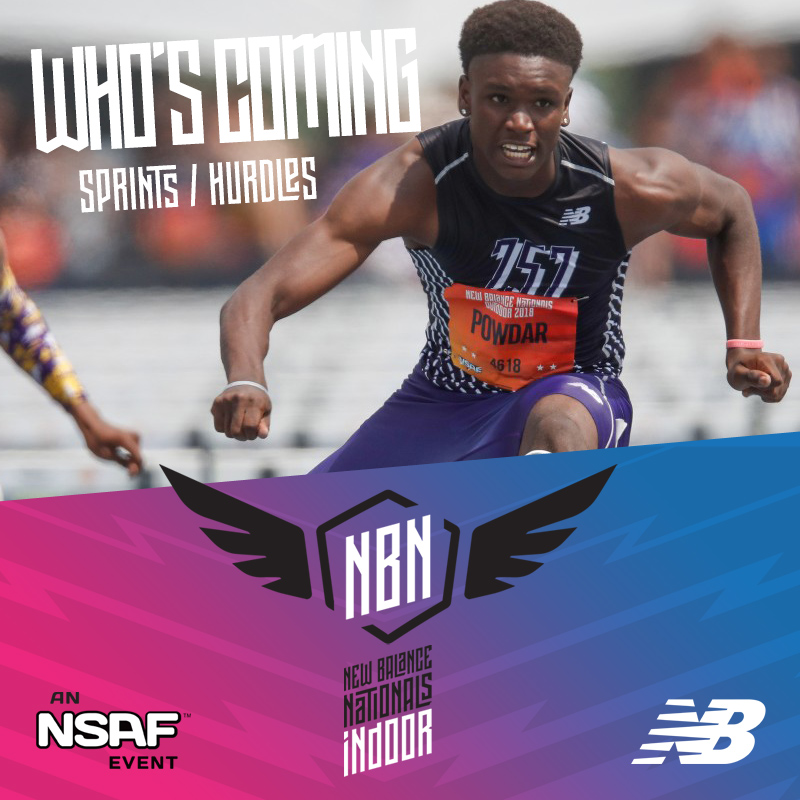 Kurt Powdar had an outstanding, redemptive victory at last spring’s New Balance Nationals Outdoor, winning the 110m hurdles in 13.59 seconds – breaking into a big smile as he crossed the line. Just beyond, he turned around toward his competitors and the crowd, gave a modest little fist pump or two and took it all in with great satisfaction at a mission accomplished. Powdar felt redemption because three months earlier he had walked off the track in dismay during the NBNI 60m hurdle final – a false start having dashed his hopes. He had come into New York tied for the US#1 at 55H and at least a co-favorite, then hurdled spectacular 7.71 and US#1 7.64 PRs to lead qualifying and semis (crushing his 55H bests en route). But then he had to watch as Ayden Owens took the title.

Now a senior at Oscar Smith HS in VA, Powdar isn’t done yet. He still would love that indoor hurdles crown and has been on a mission all winter with that goal in mind. He’s unbeaten at 55H (the standard distance in VA) and, when he had a chance to run the 60H (again with 55H en route timing) at the Bullis Champion Speed meet at The Armory, he hammered US#1 7.04 and 7.61 PRs during a dominating victory. He also signed with U. of Florida last fall, where fellow Virginian Grant Holloway – himself a 2x NBNI 60H champ and former national prep record-holder – has been dominating the NCAA scene. When you look at the past 11 months, there’s no question that Powdar has used last winter’s heartbreak to fuel great success.

Shadajah Ballard – Looking to be the first

For all of Western Branch High School’s incredible success in the shuttle hurdle relays – 16 boys’ and girls’ combined national titles, including five in the indoor girls’ 4x55m event alone – the Chesapeake, VA program has never had an individual national hurdles champion. Could that change in 2019 with senior Shadajah Ballard in the NBNI 60m hurdles? The U. of Kentucky recruit has had a stellar winter for the Bruins so far, during this first season in the post-Coach Claude Toukene era. Like fellow Virginian Kurt Powdar (see above), Ballard almost always runs the 55m hurdles and no one has done it better. Her 6A-state meet-winning and US#1 time of 7.61 is thought to be the fastest-ever for a 55mH race (there have been faster en route times from 60mH races and a few converted yards performance from the 1980s).

The official indoor track season begins for Illinois prep athletes in mid-February. But it was the first weekend in January when Plainfield North junior Marcellus Moore toed the line at the Texas A&M Invite and made it clear it wouldn’t be any ordinary undercover campaign for him. After a solid 6.88 prelim in the 60m dash, he blasted a 6.76 final for the win. Similarly, he ripped 21.36 (prelim) and 21.23 (final) in the 200m. Suddenly, he held two US#1 marks and a great winter was underway. Moore had extra incentive to be in great shape early: He was selected to Team NSAF for the Reykjavik International Games in Iceland the first weekend in February. Again, he came through spectacularly with another nation-leading 6.71 60m victory, plus the opening leg on the Team NSAF winning 4x200 relay.

If it seems like the number of young female high school sprint phenoms keeps growing and growing in 2019, it’s probably because girls like Kayla Davis keep raising the bar and redefining what can be accomplished – even before they can drive a car. Last winter and spring, it was Florida’s Tamari Davis who was smashing sprint records as a 9th-grader. This season’s freshman sensations include … well, another Davis and (see below) Moforehan Abinusawa. Kayla was one of a half-dozen super preps who challenged the elites at USATF Indoors last weekend and was a smashing success. The Providence Day School (Charlotte, N.C.) student –didn’t blink while racing the 300m against many of the nation’s top women, taking down her own freshman national record for the 4th (prelims) and 5th (finals) times this winter. The latter effort clocked in at 37.46: Good for 3rd place, US#1 and #3 all-time prep.

When one thinks of prep sprinting hotbeds, one doesn’t typically think of Oregon or the Pacific Northwest in general. Yes, there are great examples – U. of Oregon star Marcus Chambers comes to mind – but as a rule, not quite up there with Texas, Florida or California. But there Williams was last spring and summer, a sophomore going from a 100/200 sweep at the Oregon 6A state meet (10.42, 21.19) to a 4th-place finish at USA Juniors (PR 10.37) and a berth on Team USA for the 4x100 at the World U20 Championships in Finland. To say Williams acquitted himself well would be an understatement: He earned the relay gold, anchoring along with teammates Eric Harrison, Austin Kratz and Anthony Schwartz in 38.88. That’s some heady stuff for a 16-year-old.

Williams had been outstanding as a Benson HS (Portland, OR) freshman (10.61, 21.36 PRs, 3rd in 100 at state), but having not yet broken 10.5 before his state meet in May of last year – a Team USA gold didn’t necessarily seem within his immediate grasp. But Williams – supported by a “Team Williams” that includes his mother, grandmother and coaches with both the Albina Track Club and Benson HS – has had spurts of fast learning and improvement during his young track career and last summer was one of those times. This winter has been pretty good, too. Williams took the early national lead with a 6.67 60m at the UW Indoor Preview, then lowered that best to 6.64 to win the Simplot Games – matching the prep junior class national record. The same day in Kentucky, Lance Lang and Marcellus Moore (see above) ran 6.62 and 6.65. All three will be at NBNI for what could be the greatest prep 60 ever.

It took more than 2-1/2 months of indoor racing for super freshman Moforehan Abinusawa to finally taste defeat in the short sprints as a Germantown Academy, PA freshman. When she was beaten in the PTFCA 60m finals, it took a PR and US#2 7.31 from 2018 NBNI 60 runner-up Thelma Davies – a stellar Girard College HS senior headed for LSU – and even then Abinusawa was runner-up by just .01. It was probably the best prep girls’ sprint race so far season, nationally, and even if “Fore” (as she goes by) didn’t win, she certainly proved she belonged in the national championship conversation.

Like her fellow 9th-grade phenom Kayla Davis, Abinusawa had already built up a stellar resume before her high school career began. She broke 12 seconds in the 100 after her 7th-grade year and then last summer lowered her PR to 11.59 at the AAU JOs (15-16s), while also zipping 23.56 for the 200. Competing against older girls, she was 2nd and 4th in those races. At the start of her first high school indoor season she quickly made it clear she’d be a force to be reckoned with, clocking a 6.95 55m in an early December meet. She’s led the U.S. at that distance ever since, improving to 6.89 in an Hispanic Games win and then 6.82 as an en route time during her 7.33 60m victory at Millrose. Now, in the NBNI 60m and with defending champ Tamari Davis running only the 200, Abinusawa and Davies could make it an all-Pennsylvania battle for the gold.

The above-mentioned Williams isn’t the only somewhat “off-the-radar” sprinter who made Team USA last summer and has spent much of the winter leading the national list. But Justin Robinson has been surpassing expectations and making jaws drop ever since before he began his prep career at Hazelwood West HS in Missouri. He had never run track before his freshman season when a fellow football player talked him into coming out. In his first-ever 400 and barely 15 years old, he came within .03 of breaking 50 seconds and by the Class 5 state meet he was topping the podium with a head-shaking 48.83. That summer, continuing to work with Gateway United coach Sean Burris, he would improve to 48.03.

A 48.08 clocking indoors last January led to Robinson earning an invitation to the prestigious Arcadia meet in April, where he improved to 47.24 (2nd place). After defending his state title and breaking 47 for the first time (46.93), he thought he could be competitive at USA Juniors. And he was – if by competitive you mean another monster PR (46.20) and a 4th-place finish. That meant Robinson, who also ran 21.39 for 200 last spring, would run the 4x400 for Team USA in Finland – where he was the youngest part of the silver medal-winning quartet. Now in 2019, the junior has picked up where he left off. His 46.77 at Arkansas has led the national the past several weeks (#9 all-time) and, having improved his short speed with 6.79 60m and 21.18 200m PRs recently, Robinson is ready for his first NBN title shot.

Britton Wilson – Finishing with a bang

Those performances put Wilson right up there in the favorite’s role in the 400, along with the above-mentioned Kayla Davis. She’s had NBN success before – and since that freshman 400 victory. In 2017, she was 3rd in the indoor 2-lapper with a soph class national record 53.25 and has two other top-7 finishes. Wilson has also moved up the ranks as a hurdler, having improved her 400H mark to 57.95 at USA Juniors last June (5th). One thing she yet to achieve, though, is a national title – and you can bet she’ll be zeroing in on that next week.