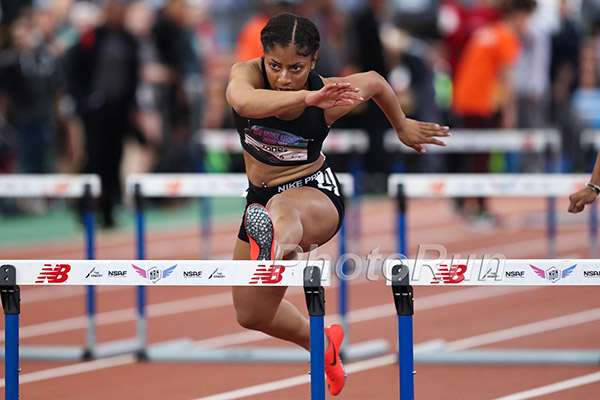 The 2018 New Balance Nationals Indoor Girls’ Athlete of the Meet honors went to Tia Jones (Walton HS, GA junior), following her US#1 and near-national-record 8.05-second victory in the 60m hurdles Sunday. Jones had a solid start in the event on Saturday, winning her prelim in 8.34 seconds and qualifying third overall into the semis. Then she was 2nd in 8.25 in the semis, trailing the surprising 8.15 PR by Jasmine Jones. Tia Jones had run an 8.15 PR herself at the Dunamis Super Meet in February, which was then the national lead. But with her subsequent loss in Kentucky to Grace Stark (also 8.15 in the semis), Emily Sloan’s 8.07 at USA Indoors and Sunday’s semi results, she found herself an underdog going into the final. 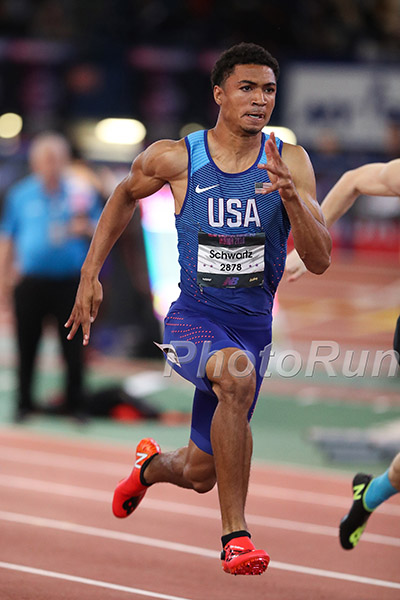 The 2018 New Balance Nationals Indoor Boys’ Athlete of the Meet award was captured by Anthony Schwartz (American Hertitage HS, FL senior) after his US#1 and near-national-record 6.59-second triumph in the 60m dash Sunday. Schwartz, who was competing indoors and at the 60m distance for the first time in his life last weekend, was outstanding in all three rounds of the event. On Saturday, he paced the qualifying heats with a then-US-leading 6.63-second clocking (=#4 all-time). In Sunday morning’s semifinals, he snipped that mark down to 6.62, now standing #3 all-time.

Then in the final a few hours later, Schwartz blazed his 6.59 to win by a big .13 seconds over Heritage teammate Tyson Campbell (6.72). That elevated Schwartz to #2 all-time in the event – just .02 off Casey Combest’s 6.57 meet and national records. Indeed, not since Combest’s 1999 triumph in that first Nike Indoor 60 – the oldest meet record on the books – has a prep dashed under 6.6 seconds. Schwartz also hit 6.13 at the 55m split during the final (after 6.17s in semis and qualifying), good for #2 all-time behind Marvin Bracy’s 6.08. NBN fans hope Schwartz will return to Greensboro this June, where he is the defending champ in the 100 and was also runner-up in the ’17 200 behind rival Tyrese Cooper.