First in a 5-part series, co-published with Runnerspace.com/DyeStat.com, on some of the leading athletes registered for the 2018 NBNI.

Highlighted by his latest national sophomore class record, a stunning 83-6.75 heave that smashed his own standard and moved him to #5 all-time HS, Trey Knight (Ridgefield, WA soph) has given the weight throw 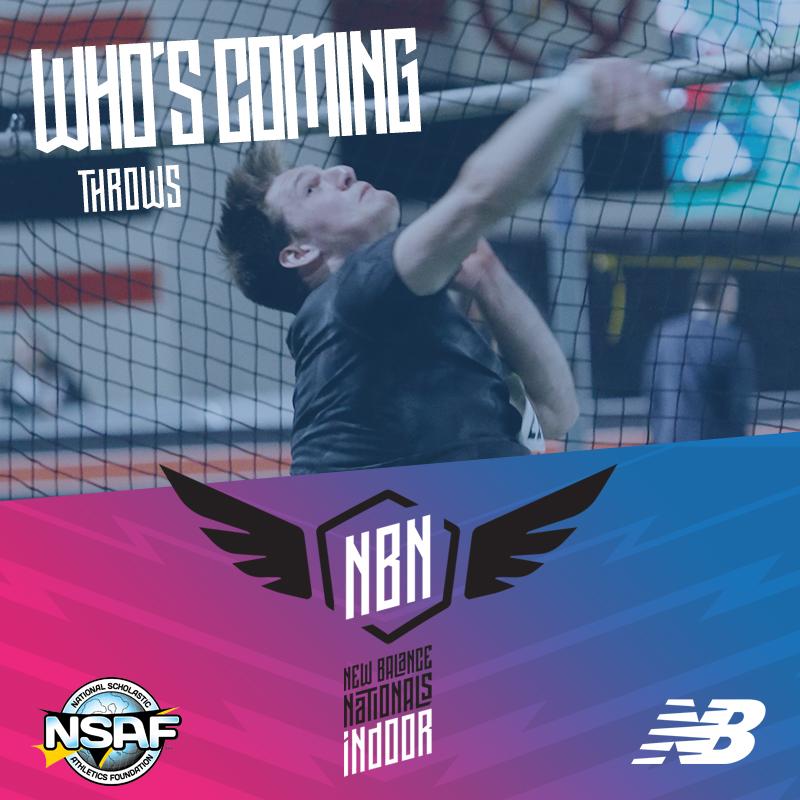 (and hammer, as well) a youthful jolt not seen since the days of Conor McCullough. Fans will recall McCullough bursting on the scene as a frosh/soph in 2006-07 – first chasing then-national record holder Walter Henning, then setting class and overall prep weight and hammer records of his own. His climactic performances in the weight included back-to-back U.S. prep weight standards at Nike Indoor (92-7.5) and NSIC (93-3.25) in March, 2009.

Knight attracted attention last year when he first reset the frosh national record in the weight at 71-3.5, then the same in the hammer at 218-8. Both marks were previously held by McCullough. Knight has come from a family of hammer throwers as his grandfather (who coaches Trey), mother (4-time Washington state champ Heather Gambill Knight) and aunt had excelled with the implement. This winter, he’s steadily improved: to 75-6.5 in December, then 80-7.25 in January, then up to his current PR. He also captured a major title at Simplot. NBNI will be his first major championship beyond Junior Olympics and he has the top entry mark by more than a dozen feet. Knight is also a top contender in the shot put, with a 64-5.25 PR at US#7.

Let’s face it, throws fans have been spoiled by all of the great girls’ shot putters from the last four years. From Raven Saunders to Sophia Rivera to Alyssa Wilson – nine prep girls had thrown 50 feet or further indoors during multiple years each between 2014-2017, an average of more than three a year. For a while this winter, it didn’t look like anyone would reach that barrier. Enter Shelby Bigsby. The Montclair, NJ senior improved by more than a foot at the 84th Eastern States Champs to reach 50-2 and inject energy into the event as well as establish herself as the girl to beat at NBNI.

Bigsby had a big jump to 43-2.25 at NBNO in ’16 (4th Emerging Elite), then progressed from the 38s in December ’16 to a PR 44-8 at NBNI last winter to win Emerging Elite. She reached 45-9 outdoors last spring, but didn’t fare well at NBNO. This winter, however, has seen Bigsby, who started throwing in 7th grade, go unbeaten and PR several times. Her 48-7.25 at the Varsity Classic in February truly put her in the top echelon of national class and her first state and Meet of Champions titles confirmed it. Her 50-2 at Easterns made her the 4th girl in NJ history over 50 feet.

Joshua Sobota – The road to 70 feet

As has been the case with the girls’ prep shot put scene, the boys’ event has been bereft of athletes beyond a particular barrier in 2018 – in this case 70 feet – after a prodigious couple years dominated by superstars Jordan Geist and Tripp Piperi. That almost changed at the Dunamis Super Meet, as Tyson Jones won with a US#1 PR 69-7 after being pushed by Joshua Sobota’s PR 67-3.75. A week later at the Kentucky Invite, Sobota – a Bearden, TN senior – improved his best again to 67-5.75 for the win. With Jones not entered at NBNI, Sobota is the top ’18 performer entered (though Texan Otito Ogbonnia has the best career entry mark of 68-6 from ’17).

Before this winter, Sobota had already made his mark as someone who PRs in the biggest meets. In his first NBNI last winter, he had his first 60-footer (60-11.5) to take 8th in the final. Then at NBNO last June, he hit a 2-foot PR at 65-11.75 to take a surprising 3rd behind Geist and Jordan West. That sent him up well for this, his senior year. Sobota, who trains with and competes for GymTek outside the HS season, started young – he’s been throwing at the Junior Olympic level since his grade school days in 2011. His national JO shot put resume includes a 3rd in 2013 (AAU) and titles in 2015 (AAU) and last summer (USATF).

There aren’t many clubs like Coach Mike Judge’s Throw 1 Deep out of Marietta, Ga., and all great track and field clubs understand the legacy left by those that came before them. So after Javon Joyner (Norcross, GA senior) won the weight throw at the Dunamis Super Meet last month and a certain T1D national-record holder was mentioned, she was delighted. Seven years ago, Shelby Ashe smashed the national weight throw record at NBNI at 68-2.5 – a mark that still stands – and it has special meaning for Joyner. “She has the same birthday as me!” she exclaimed. Ashe’s mark, of course, is a goal for Joyner and every other high elite prep with the implement.

Joyner’s been adding to the T1D legacy herself this winter. Her Dunamis victory spanned 59-4.5, just over a foot off the 60-5.25 PR she established at the Hoover Alumni meet at the Crossplex in December. She stands U.S. #3 with that mark and #2 among NBNI entrants, trailing only 2017 NBNI runner-up Gianna Rao (current 63-2). Joyner was 11th at NBNI last March, so she has come a long way in 12 months. Sixty-eight feet is still a ways off, but in the very likely circumstance she makes it high on the medal stand, she will join Ashe and many others T1D athletes who have made their mark nationally.