This is the first in a five-part series, a joint effort with the NSAF and Runnerspace.com, highlighting some of the exciting confirmed entries for the 2017 New Balance Nationals Indoor in each event category!  Coming in the days ahead: Part 2: Jumps  |  Part 3: Sprints/Hurdles  |  Part 4: Distances  |  Part 5: Relays 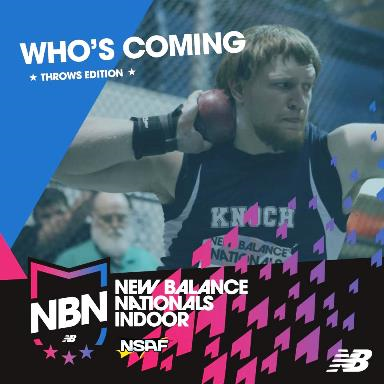 Even after Jordan Geist’s outdoor season ended in disappointing fashion for the second straight year – suffering his first loss of 2015-16 at NBNO to Adrian Piperi, then missing another Team USA berth at Junior Nationals – there was reason for optimism for Geist and his fans early this winter.  After all, the Knoch, PA senior has been outstanding the past two indoor campaigns, including the NBNI title last March over Piperi and, of course, it was his senior year.  Well, Geist started well enough with a 71-4 at Dickinson in mid-December, then five days later competed in the opener of a weekly series at Hempfield HS, throwing 68-4 – with the 16-pound shot!!!

Jaws around the country dropped in unison.  68-4 with the big boy, NCAA and Olympic-level shot???  Obviously, that implement is not thrown frequently by preps, but Geist’s mighty throw destroyed Ryan Crouser’s mark of 63-x set in 2011 and even surpassed the 67-9 outdoor mark by the legendary Michael Carter in 1980 – something few thought could be done.  Since then, the Arizona signee has continued to raise his game with the prep (12-lb.) implement, getting into the 72s, 73s, then a tremendous 76-10.5 at his TSTCA final Feb. 18, coming within 4 inches of Crouser’s mark there (77-2.75).  If Geist could beat that standard at NBNI, it would light up the whole weekend and perhaps launch him toward getting that first Team USA jersey and even Carter’s unthinkable 81-3.5 outdoor record.

A thrower who regularly competes twice a week, Alyssa Wilson has made 55-foot shot puts almost routine – a distance that just four years ago was further than any girl had ever thrown.  She now has 10 career meets beyond 55, plus 12 more beyond 54.  When the Donovan Catholic, NJ senior hit a then-PR 56-2.5 on January 11, it truly became a matter of “when,” not “if” she would break Raven Saunders’ 2014 national record of 56-7.5.  Well, “when” turned out to be Feb. 28 – yesterday – at the Eastern States Champs in The Armory.  And Wilson left no doubt: She crushed Saunders mark with a 57-5.5 on her first attempt, and added two more 56-footers in the series, including 56-7.5.  The indoor national record can be checked off her bucket list.

And even if a New Balance Nationals Indoor title seems a done deal next week, it’s unlikely the UCLA signee will take it for granted.  Last March, she was beaten by tough in-state rival Nickolette Dunbar (now at LSU), 54-7.5 to 53-5.5.  That turned out to be the last time Wilson would lose to a prep or Junior until the World Juniors in July, when she completed her stellar 11th-grade season with a bronze medal performance in Bydgoszcz.  She will likely have a chance at an international title again this summer, should she go for the Pan Am Juniors, and it truly seems that the sky is the limit as to how far she can throw.

Indoor track and field is not Adrian Piperi’s favorite thing.  It’s not that the Woodlands, TX senior minds throwing with a roof over his head, it’s more that he feels a bit of an experience deficiency – getting only a small handful of opportunities as a Texan – when he faces guys like Jordan Geist who compete indoors every week all winter long.  “Tripp” has been solid enough indoors, finishing second behind Geist last year at NBNI and this winter improving more than three feet to 72-5 over four undercover meets.  That’s more than a foot beyond the NBNI meet record, but – as Tripp surely knows – more than four feet behind Geist.

But the Geist-Piperi rivalry is a great one for a reason – because Tripp has proven he can peak in June and July and has risen up as an underdog to beat Geist before.  His 73-5.25 PR won a thrilling NBNO battle in 2016, before a huge throng of wildly cheering fans, that might have been the greatest prep shot competition ever.  Tripp also has that stellar 2015 World Youth title in his resume, as well as the USATF Junior title last June that earned him another Team USA berth.  The World U20s, however, didn’t go quite as the Texas signee would have hoped as he was 5th and watched teammate Bronson Osborn (currently injured) medal.  So with no lack of motivation for either party, the Geist-Piperi showdown at NBNI ought to be epic again.

An event like the NSAF’s Caribbean Scholastic Invitational is a great chance to learn things from and about other athletes from other countries.  In Havana last May, Team NSAF’s throws specialist KD (aka Kathleen) Young made sure she took notice of the competition during the shot, discus and hammer competitions and came away with a key realization: You don’t have to be a really big girl or woman to be a very good thrower.  Speed in the ring was often the key, so that’s one thing that the Warrensburg-Latham, IL senior has been focusing on so far in 2016-17.

So far, the results have been good.  Young – known for racking up the miles traveling out of state to find competition much of the season – hit a US#2 52-4 in a meet in Tiffin, Ohio a few weeks ago to beat her all-time indoor and outdoor PR.  Last winter, when she was 5th at NBNI, she had a seasonal best of 50-8 – her only meet over 50.  This year, she has five meets over 50 and three more of at least 49-5.  The South Carolina signee has also improved her weight throw more than a dozen feet to 56-11.5, making her an All-American contender there, too.  In both cases, getting faster in the ring has been the key.

Jacob Wickey has been more than a competent shot putter and discus thrower during his prep career at Medina HS in Ohio.  But it’s been in the weight and hammer throws that he really began to shine a few years ago and has embraced as a ticket to NBN All-American and, potentially, championship success.  The big improvement in the weight came when he was a sophomore two years ago, going from a 58-11.5 best to 65-11 early, then improving to 72-5.75 for a state title and 73-2.5 for 6th at NBNI.  Then as a junior, he racked up the 70-plus performances and peaked at the right time with a then-PR 74-11.5 for 3rd at NBNI (after a tough loss at state).

A big junior-year improvement in the hammer – he progressed to 215-6 and a USATF JO title – buoyed him coming into his senior year campaign.  Now a Kent State signee, he started out with a PR 76-10, then hit 78-0 a few weeks ago at the Spire Institute.  That made him #3 in state history and #16 on the all-time national prep list.  He’s won all seven of his meets this winter in Ohio and been consistent from 74-78 feet.  In a year where no one has soared over 80 feet, he’s emerged as the favorite to get it done at The Armory next week.

If there’s an epicenter of weight and hammer throwing in the United States, it would probably be either in Rhode Island or Marietta, Georgia.  While the latter locale is notable exclusively due to Coach Mike Judge’s outstanding Throw 1 Deep club, the former is more a state-wide culture, fostered by long tradition and great mentors like Bob Gourley.  The excellence isn’t limited to one club or school and the events hold state-meet status.  The latest talent to emerge from this weight/hammer hotbed is Gianna Rao, a junior from Ponaganset HS in North Scituate.  Rao’s breakthrough came at NBNI last March.  Coming in, she was a 49-11.5 weight thrower, 2nd in her class meet, then struggling to 14th in the Rhode Island state meet.

But at NBNI, she hit a huge PR 55-4.25 for 4th – one of the bigger surprises of the meet.  She followed that with a 174-8 best in the hammer last spring, taking 6th at NBNO.  Now this winter, Rao has been unbeatable.  She’s had eight meets at 58 feet or better, been over 60 feet three times and has a brand new 61-3 PR from the Weight-a-Rama meet in her home state.  She also triumphed at Dartmouth and Yale.  Only seven girls in U.S. history have thrown further and she sits behind only Victoria Flowers (62-2 for Classical HS in 2008) on the all-time Rhode Island list.  Rao has come a long way in the past year and can take the next big step at NBNI.

A huge weight throw effort last weekend by a certain NBNO hammer champion, however, has given fans reason to think that national leader Gianna Rao will have some still competition at NBNI next week.  Shenendehowa, NY senior Jillian Shippee came into her Section 2 state qualifier with a weight best of “just” 57-9 this winter.  In 2016, she hit 60-4.75 for her PR, then was runner-up at NBNI with a 55-11 behind Kamryn Brinson’s 62-8.5.  But at that Section 2 meet, she finally hit that big one – a 60-foot, 7-inch heave that propelled her to #2 on the national list.  Shippee remains #12 all-time, but inched closer to Melissa Kurzdorfter’s all-time New York best of 61-4.

But Shippee knows what it’s like to come through as an underdog and win a national title.  Last spring in the hammer at NBNO, she hit 181-2 on her first attempt, daring the field to come after her.  No one came within 4-1/2 feet and the North Carolina signee had her title, the first from the Empire State to win the event.  If Shippee could come through next week at The Armory, she wouldn’t be the first New Yorker, but she would join Kurzdorfer (2010) and two others from the past with weight throw titles.

You won’t see Bryan Hudson atop the championship podium in the shot put next week, and probably not among the All-Americans, either.  He’s also unlikely to win in the weight throw, where he’s entered among the Emerging Elites.  But what you will see is a rising star in both events who could be “the future” in the throws for U.S. preps, and perhaps beyond.  Hudson, a Scott County, KY sophomore, is a big (6’4”, 250), friendly athlete who is learning the event, growing into his body, and recently swept the shot and weight at the Kentucky Invite with marks of 58-1.75 and 58-1.25.

Hudson is the top sophomore entry in the shot and not far off in the weight.  He’s hoping the competition will be a learning experience and push him to break the 60-foot barrier.  It’s not like he’s new to throwing, having won several Junior Olympic titles, but getting to watch and compete alongside guys like Jordan Geist and Adrian Piperi will be a new experience.  On the other hand, as it turns out, track and field might not be Hudson’s best sport.  He is ranked as one of the top 10 sophomore offensive linemen in the country and already has scholarship offers from the University of Kentucky and University of Louisville.