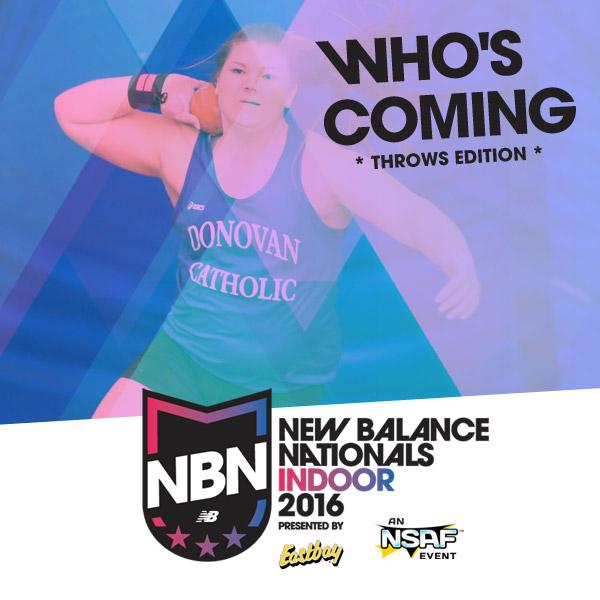 First in a 5-part series on top athletes coming to the 2016 NBNI.

At the Chicagoland Throws, the 2nd weekend of July last year, Alyssa Wilson (Donovan Catholic, NJ junior) had something of a landmark performance, hitting a PR 49-10.5 in the shot put to lead all preps and beating US#2 Elena Bruckner in the process.  It was a great way to end a sophomore season … except Wilson wasn’t done.  Never letting up, she continued to train and compete into the late summer and early fall in club meets.  The result was a huge improvement to 51-7.75 that almost no one knew about nationally.  Wilson, who had been 3rd at the 2015 NBNO, had closed the gap significantly on the other top U.S. returnees going into the 2016 season.

Then, on December 19, she blew right past those returnees.  At the Bishop Loughlin Games, Wilson shocked the prep throwing world with a 54-5 – a nearly 3-foot PR that made her #3 all-time.  Now, she had a full season ahead and the task of trying to surpass or live up to that mark.  While 54-5 remained her PR for the next few months, Wilson still had what is thought to be the greatest indoor season in girls’ shot history, with a dozen more meets over 50 feet, including five over 53.  Then, facing great in-state rival Nickolette Dunbar, she was finally beaten – and at the New Jersey Meet of Champs, no less.  But three days later, this past Tuesday, March 1, she had an opportunity for redemption.  The result was a head-spinning 54-11, beating Dunbar and surging ahead of Michelle Carter on the all-time list.  Raven Saunders’ national record is still nearly two feet away, but don’t put any limits on what Wilson could do at NBNI.

At the beginning of May last spring, Jordan Geist was on top of the world as a thrower.  The Knoch, PA sophomore had marked an impressive PR 67-1 shot put to win the Penn Relays, then a week later exploded to 69-1.  Geist had thrown 66 feet indoors, but then just 61-7.75 at NBNI for 4th.  Now he was a strong contender to battle for the title at NBNO in June, as well as make the World Youth team a few weeks later.  It didn’t, however, work out that way. Geist didn’t break 66 the rest of the year, and while he won the AAA state title in PA, he was 4th again at NBNO and then also 4th at the WY Trials.  So it was on to preparing for his junior year.

That junior year started with a bang when Geist hit 68-6 in his season opener in mid-December.  But that was only the beginning.  Improvements to 69-6.5 and 69-11.5 would come in mid-January and at the end of the month he joined the 70-foot club, getting all the way out to 71-2.5 at a TSTCA meet.  Geist still wasn’t done, though, improving his PR three more times since to 72-9.5 – #3 all-time, trailing only Ryan Crouser and Brent Noon.  With yet another 71-footer to win the PTFCA state title, the junior began his final preparations for NBNI.  Being in peak form and throwing big in the season finales is the only thing Geist hasn’t accomplished yet and it’s prime time to make his dreams come true.

Nickolette Dunbar could hardly have asked for a better 2015.  As a Whippany Park, NJ junior, she won the New Jersey Meet of Champions shot put indoors, then took 4th at NBNI.  Then outdoors, she cracked the 50-foot barrier – out to 51-2.75 – in completing an NJ MOC sweep and then finished runner-up at NBNO behind Sophia Rivera.  To top it all off, she made Team USA for the World Youth Champs, made the final and finished 6th in her first international meet.

So it was probably a little surprising for Dunbar in mid-December when she learned that in-state rival Alyssa Wilson was suddenly three feet better than her.  That has to be a little disconcerting when it’s someone you’d consistently beaten.  But it appears that Dunbar has used Wilson’s success for motivation and has fashioned a great season of her own, progressing from the 47s, to the 49s and to the 51s by mid-January.  Then at her Group sectional meet in mid-Feb., she launched it out to 52-11.25, and suddenly Wilson was back in range.  Two weeks later, Dunbar PR’d again at 53-2 and handed Wilson her first loss of the year.  Wilson turned the tables three days later at Eastern States, but Dunbar has proven something to herself and is ready to compete with the super NBNI field.

As a sophomore at The Woodlands in 2015, Adrian “Tripp” Piperi was doing things with the shot put that few sophomores have ever done.  He had already reached 60 feet as a freshman, then after taking 5th at NBNI, he steadily moved past the 63-, 64- and 65-foot barriers.  Incredibly, though, another 10th-grader Jordan Geist, was throwing even better, having hit 69-1.  But after winning the state title in mid-May, Piperi found another gear.  At NBNO in mid-June, he heaved a 66-10 to get the runner-up spot.  Then a big clutch performance on his last throw at the World Youth Trials got him the victory there two weeks later.  No one was prepared, however, for his stunning 72-2.25 (5kg shot) and gold medal performance at the World Youths in Cali.  Tripp was on top of the world.

Piperi came back in December, however, to find his Pennsylvanian “rival” Geist rapidly improving and surging back ahead of him.  Someone who has clearly said he doesn’t like indoor throwing, he still hit the two main Texas indoor meets, hitting a near-PR (12 lb. shot) 66-9.25 at Texas A&M and 63-4.75 at Carl Lewis.  As Geist got into the 70s, an NBNI gold might have seemed hopeless.  But Tripp has found his groove in the early Lone Star State outdoor season and marked 69 feet twice.  Geist is within his range and Tripp will be looking for some of that big-meet magic again next week in New York.

With all of the noise her friendly New Jersey rivals have been making this winter in crushing 53- and 54-foot shot puts, 2015 might seem like a long way off for Brentwood, MO senior Sophia Rivera.  She could hardly be blamed if it seems like a dream, in fact, because it was a near-perfect junior year.  She improved more than six feet from her sophomore year and went unbeaten in the shot vs. U.S. preps, sweeping NBNI and NBNO.  She PR’d at USATF Juniors with a US#1 53-5.5 to make one Team USA (Pan Am Juniors), then a few days later set a national record (59-4.25) with the Youth shot to make another US Team (World Youths).  And all this while still excelling in her #1 throw, the javelin, winning NBNO there as well and – historically – competing in both SP and JT finals at WY in Cali (finishing 2nd and 7th).

Comparatively speaking, 2016 has been very low-key so far for the senior, who signed with Wisconsin in the fall, but has thrown sparingly while still enjoying her other sports – softball and basketball.  She’s played well enough in the latter to attract small college scouts, and has competed in just three track meets, with a indoor PR of 52-0.  Most years – like 2015, for example – that would be enough to win NBNI.  This year, 52-0 would most likely will fall well short.  Rivera will be severely challenged and it will be thrilling to see if she can raise her game back up and/or beyond last year’s levels to compete with her improved rivals.

At no other school besides Barrington HS could it happen – being a 79-foot weight thrower and #2 at your own school.  That’s how it was for Robert Colantonio in 2015 as he and Adam Kelly formed an unreal 1-2 punch at the Rhode Island powerhouse under the tutelage of hammer guru Bob Gourley.  Colantonio threw further than 75 feet eight times, with a 79-9 PR and 78-0.25 at NBNI, but his only win came in the first meet of the season.  Having a slightly better teammate to push you in training can be great, but being #2 almost all the time can be frustrating, too.

Last spring in the hammer, however, Colantonio began to win some of those matchups, including the state meet and – most importantly – USA Juniors.  There were other times when Kelly prevailed – like NBNO – but Colantonio was one of the few U.S. preps to make both the World Youth and Pan Am Junior U.S. teams, and placed 5th in Cali and 7th in Edmonton.  This winter, with Kelly having moved on to college, the senior has been unbeatable – improving to 82-0.5 and with five more meets at 79-0 or better.  This will be his time to shine at NBNI and perhaps move further up the all-time list.

He’s not the nation’s best shot putter or weight thrower – but put the two together and it’s tough to beat Isaiah Rogers of the famed Marietta, GA-based Throw 1 Deep club.  No one has combined the two prep indoor throws better than the Campbell, GA senior, who has been on a nice improvement curve in 2016.  As a junior last winter, Rogers was in the 67s with the weight and 61s with the shot, placing 6th in the latter at NBNI, but just 14th in the former.  Then came the spring and summer, and not one, but two international trips – the first with Team NSAF at the Caribbean Scholastic Invite and the 2nd throwing shot for Team USA and making the World Youth finals.  No doubt, Rogers matured as an athlete and as a person.

Perhaps even more so than with the Throw 1 Deep boys, Kamryn Brinson follows a long tradition of national success by the club’s girls in the weight and hammer – led by no less than national-record setter and 2-time NBNI champ Shelby Ashe, who marked 68-2.5 in 2011.  Brinson hit a soph class national record 58-8.75 as a Marist, GA soph in 2014, but last winter couldn’t improve on that and was just 6th at NBNI.

Like teammate Rogers, Brinson also earned a trip to Cuba with Team NSAF and threw the hammer there and this winter indoors had been better than 2015, with a 58-0.25 best.  But if you’re following what she’s been doing in the club’s recent outdoor meets, it’s clear she’s starting to really break out as a senior.  She hit 62-0.5 in mid-February, then hit a huge 65-6.25 last weekend at the club’s “Last Chance” meet.  Only Ashe has thrown further on the all-time indoor list.  If she can match or exceed that mark at NBNI next week, Brinson will earn her place among the club’s – and the nation’s – all-time greats.